Igbo and its Origin

Two major assumptions explain the origin of the Igbos. The first one claims that the Igbo originated from the East, probably from Israel or Egypt. The second, claims that the Igbo have lived in the present area from time immemorial, what has been described as the “Igbo Core” from where they migrated to other parts of Igboland. This claim points to the Nri- Awka – Orlu area as the early centre of Igbo settlement. This area is known as the “Core Igbo”. This second account has been supported by archaeological discoveries at the University of Nigeria, Nsukka, which claims there was human habitation in Nsukka area 4,500 years ago.

Besides, it is generally believed that:

The socio-political organisation of the Igbo

A major feature of the political organisation of most parts of Igboland was the decentralised political system of government. Thus, kinship was the most important factor of Igbo political structures. Various social institutions based on kinship existed, and the government operated at these levels .-

Next to the extended family was the kindred or lineage, made up of different extended families with common ancestry. The highest level is the town or clan.

At the various levels, elders played prominent roles as holders of the Ofo (High staff of authority). Thus, the man was the head of his family by virtue of his age. At the extended family, kindred and village levels, the oldest man (Okpara) assumes the position of head, though all adult males participated in the decision-making process.

This is why the Igbo have been described by scholars as having “an excess democracy, not an absence of government”. There was also the council of elders at the village level made up of eldest men from the constituent clans (kindreds) and a few privileged indigenes. This council held private sessions, took decisions and later announced the decisions to the village assembly for approval.

However, on the town level, member villages sent representatives after the consultation with the various interest groups. The representatives took decisions that were binding on all constituent villages. There are exceptions to this procedure during the times of emergencies, when an assembly of all adult males was called to take decisions.

Apart from the elders, there were other groups who played vital roles in the Igbo society. These are the age grades system, title societies (Ozo), cultural secret societies (Okonko, Nwanwu and the priests) and so on.

In Igboland, the age grade societies were the labour force of the Community. They acted as the soldiers of each village or town. They were important in the implementation of the decisions taken by the village assembly. They were used to collect levies from defaulters and to enforce some social rules and norms.

The association of titled men, e.g. the Ozo which was an exclusive society or social club for wealthy men, played the role of intervening in some disputes and ensuring peace was restored.

The Priests of major oracles acted as the final arbiters. Being in charge of the oracles, they administered justice by conducting an oath ceremony in the dispensation of Justice.

The economy of the Igbos

The major occupation of the Igbo was agriculture. They cultivated yam, cocoyam, cassava and vegetable. Labour was drawn from families. The man, his wife (wives) and children formed the main labour force. At times, members of the extended family, e.g ., inlaws, assisted in either cultivation or crop harvest. Wealthy farmers also utilised the service of slaves. This was in limited use. The wealthy farmers also made use of hired labour and there was exchange of labour between members of age-grades or between in-laws.

Among the Igbo, yam was regarded as the king of all crops and majorly cultivated by men. Women cultivated cocoyam, cassava and vegetables. Among the Igbo, the farm products were supposed to last the family all year round while some were made available for trading.

Another aspect of the Igbo economy was industry. The Igbo were engaged in iron smithing, pottery, weaving, wood carving as well as sack making.

The renowned areas of iron works were Awka, Nkwere and Abiriba.

Pottery was another industry found among the Igbo. A major centre for pottery in Igboland was Afikpo.

Women took over the weaving industry with the introduction of cotton. Wood carving was yet another craft undertaken by men. The craftsmen carved different items for religious, entertainment, and domestic use.

Trade in goods were common throughout Igboland. Excess from agricultural and manufactured products were sold in the market. The market system revolved around the Igbo concept of time and week. The Igbo calender has four days which make up a week (Iza). Consequently, each of the days (Eke, Orie, Afor and Nkwo) represented a significant market day among the village groups in Igboland. There was a considerable exchange of goods among villages, groups as well as intra-village and inter-village markets. The Arochukwu trader emerged in the 17th century when they started to act as middlemen in the trade in slaves between the Europeans on the coast and merchants from Eastern Delta communities.

Apart from agriculture, industry and trade, there were those who rendered social services. These included traditional musicians, jesters, barbers, traditional doctors and herbalists.

Origin of the Isoko

The Isoko are located in the upper Western Niger Delta region. This area is characterised by the evergreen forest and is dominated by oil palm trees. The Isoko were therefore agriculturists and engaged in some fishing. From the 16? century, slaves were exported from the upper Delta.

The Isoko practiced a non-centralised system of government. The clan represented the peak of Isoko political structure.

Socio-political organisation of the Isoko

The Isoko, like other non-centralised states, had institutions which ensured the day-to-day running of the society. The highest level of the society was the village which had a council of elders known as Ekpako. There were also prominent officials. The most important was the spokesman who was chosen because of his charismatic qualities his knowledge of the custom and his ability to relay the discussions of the council of elders to the people. Another important official was the war leader who exercised some leadership role in battle. 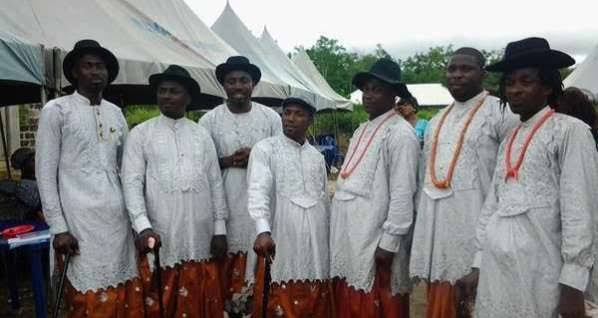 There was also the position of the Ovie. The Ovie had both secular and religious functions such as being in charge of making sacrifices to the gods for the welfare of the society.
Another major institution was that of the Age grade. The most junior set was made up of boys under the age of fifteen. These groups performed communal duties like sweeping and clearing village paths and markets. The next group comprised men of about 40 years old who served essentially as the labour force. They constructed public buildings and major projects within the society. The last age-set comprised the men of about 50 years old and above. These men constituted the council of elders in the society.