An input device for a computer is anything that sends information to the CPU to perform a specific function. A computer has the ability to use many different types of input devices to provide a unique experience to each user. Computer input devices include many types of hardware such as a keyboard, mouse, webcam, scanner as well as a microphone.

An input device is a peripheral device that converts symbols that people understand into bits that computers can process.

An input device includes a keyboard, a terminal, a touch screen, a mouse, a scanner, etc.

A keyboard is a device used to encode data by key depression, which enters information into a system. The keyboard is one of the most common type of input devices that are used with a computer. A keyboard consists of letters, numbers and other types of keys that perform different types of functions when used with a computer system. A keyboard can connect to the computer through a cord as well as through a wireless connection. 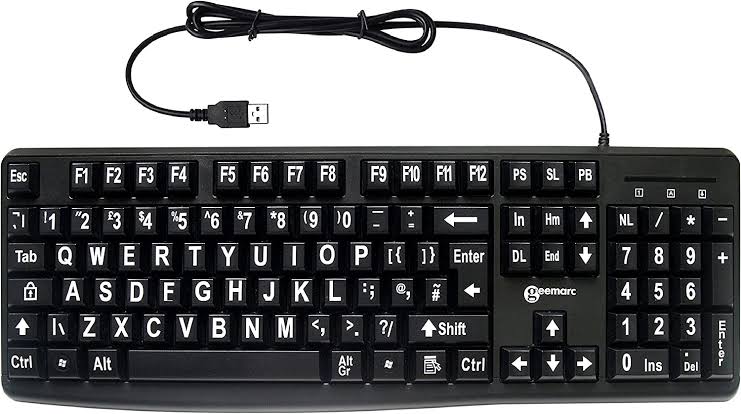 The keyboard converts alphabets and numbers, and other special symbols into electrical signals that processor can understand and process. These signals are sent to the computer’s CPU. There are three different layouts.

Keys on the Keyboard

The keys on the keyboard can be grouped into the following:

A) Function Keys: Special keys labeled F1 to F12. These keys have different meaning depending on which program is running. Most computer keyboards have a row of function keys at the top of the keyboard. These keys are marked F1 through F10 or F12. The function keys are frequently used in combination with other keys such as the CTRL key, the ALT key, and the Shift key. These combinations result in a plethora of possible keyboard shortcuts.

B) Numeric keys: Many, but not all, computer keyboards have a numeric keypad usually located on the right side of the keyboard. This keypad has a group of number keys with additional markings like arrows, PgDn, End, etc. The numeric pad is controlled by a toggle key marked Num Lock. When the Num Lock key is on, this pad can be used to enter numbers. When the Num Lock key is off, the functions listed below the number will be activated. These functions usually include arrow keys that can be used to move the cursor around the screen. Likewise the keys marked PgUp and Pg Down will move the cursor a page up or down on the screen. The Home and End keys will move the cursor to the beginning or end of a line or document, respectively. Numeric keypads often include other keys as well. Many include useful symbols such as the period, slash, and plus and minus signs.

C) Alphanumeric keys: Those are the keys that contain alphabet symbols (upper or lower case) and numerals (0-9). Everything else is a punctuation, control, function, or special key.

D) Cursor control keys: Or arrow keys are buttons on a computer keyboard that are either programmed or designated to move the cursor in a specified direction. Most keyboards have four arrow keys that enable you to move the cursor (or insertion point) up, down, right, or left. Used in conjunction with the Shift or Alt keys, the arrow keys can move the cursor more than one position at a time, but this depends on which program is running.

E) Special keys: All of the other keys on the computer keyboard such as the function keys, control keys, arrow keys, caps lock key, delete key, etc belong to this category.

An object used as a pointing and drawing device. The mouse usually has a ball and buttons and is connected to the system unit through serial port. As a mouse is rolled across the flat desktop in any direction, it locates the pointer correspondingly on the screen. Then it issues commands using the selection buttons on the mouse. Many portable microcomputers such as lap-tops use trackballs instead of mice.

A touch screen is a monitor screen that allows users to interact with a computer system by touching an area of the display screen. The screen is covered with a clear plastic layer that has a matrix of cells. A user touches a graphic button that displays option on the screen. Touch screens are easy to use.

A light pen is a light-sensitive pen-like device used by pointing it at the display surface. A user brings the light pen to the desired point on the screen and presses a button, causing it to identify the current location. It is used to select options from a menu or to draw images.

A digitizer tablet is also called a graphics tablet or just a digitizer. The digitizer is a drawing tablet used to sketch new images or trace old drawing or photograph. The user uses a pen-like device called a cursor to draw images. Designers and architects usually use digitizers. Light pen and digitizer technologies are used for pen-based computing.

A scanner is a device that reads spatial pattern such as images, graphics and texts, and then generates digital signals of that pattern. Converted digital data may be processed by a computer, stored in a disk, printed by a printer or displayed on a monitor. Scanners are commonly used to capture graphic images that can then be placed in a page or on any document.

Scanners usually include optical character recognition (OCR) software so that scanners can read and capture texts directly through optical scanning.

A bar code is a specialized code represented by sets of parallel bars of varying thickness and separation. This is used for fast identification of items with an optimal scanner. The optical scanner is called a bar code reader. The bar code reader is a photoelectric scanner that read the bar code.

Card reader is a data input device that reads data from a card-shaped storage medium. The first were punched card readers, which read the paper or cardboard punched cards that were used during the first several decades of the computer industry to store information and programs for computer systems.Moderncard readers are electronic devices that can read plastic cards embedded with either a barcode, magnetic strip, computer chip or another storage medium.