An output device is any peripheral device that converts machine-readable information into people-readable form such as a monitor, printer, plotter and voice output device. Output devices are used to display input data that has been processed by the computer into useful output information. Through its output system, the computer presents the data it contains in a form that the user can understand. The presentation is typically in one of four forms: graphics (e.g ., charts and photographs), text (e.g ., words and numbers), video (e.g ., photographic images in motion), or audio (e.g ., music and speech). Probably the most common output devices are monitors for producing temporary displays (soft copies) and printers for producing paper copies of documents (hard copies).

A computer display is also called a display screen or video display terminal (VDT). A monitor, or screen, can display graphics, text, and video output. To display video in the monitor, the computer needs a video card (or graphics card) for converting the digital signal (i.e ., data in the form of Os and 1s) from the processor to an analog signal (i.e ., data in the form of a continuous electrical wave) that the monitor can interpret.

A monitor is a screen used to display the output. Images are represented on monitors by individual dots called pixels. A pixel is the smallest unit on the screen that can be turned on and off or made different shades. The density of the dots determines the clarity of the images, the resolution.

Screen resolution: This is the degree of sharpness of a displayed character or image. The screen resolution is usually expressed as the number of columns by the number rows. A 1024 X 768 resolution means that it has 1024 dots in a line and 768 lines. A smaller screen looks sharper on the same resolution. Another measure of display resolution is a dot pitch.

There are two types of computer monitor based on the colour display. They are

Types of monitors based on technology

Monitors come in two main varieties based on the technology, they are

A printer is an output device that produces text and graphics on paper. All printers have three main components: the printing mechanism itself, paper feed mechanism, and the control and interface electronics. 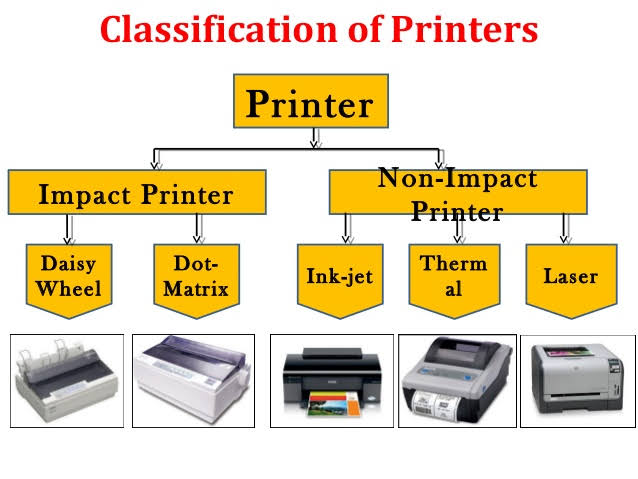 Printers can be divided into two main groups.

(a) Dot-matrix printer: Dot-matrix printer is an impact printer that produces text and graphics when tiny wire pins on the print head strike the ink ribbon. The print head runs back and forth on the paper like a typewriter. When the ink ribbon presses on the paper, it creates dots that form text and images. Higher number of pins means that the printer prints more dots per character, thus resulting in higher print quality.

(b) Line Printer: A line printer uses a long drum imprinted with raised characters. As the drum rotates, words are formed on the page. The drum moves in a horizontal direction, printing one line at a time. Line printers have limited font availability and no graphic capability. Due to their design, they require special paper with prepunched holes on the sides that attach to the printer by raised grooves. The line printer is still found in some businesses due to its durability and ease of use.

(c) Daisy-Wheel Printers: It uses a wheel as a print head. When the wheel rotates, hammers strikes the backside of the spoke and press it against the paper to print a character.

(a) Inkjet printer: Inkjet Printers are non-impact printers which print text and images by spraying tiny droplets of liquid ink onto paper. They are the most popular printers for home use. Currently, most inkjet printers use either thermal inkjet or piezoelectric inkjet technology. Thermal inkjet printers use aqueous ink which is a mixture of water, glycol and dyes. These inks are inexpensive but they can only be used on paper or specially coated materials. Piezoelectric inkjet printers allow the use of a wider range of inks, such as solvent inks, UV-curable inks, dye sublimation inks, and can print text and graphics on different uncoated materials.

(b) Laser printer: Laser printers are non-impact printers which can print text and images in high speed and high quality resolution, ranging from 600 to 1200 dpi. Unlike inkjet printers, laser printer use toner (black or colored powder) instead of liquid inks. A laser printer consists of these major components: drum cartridge, rotating mirror, toner cartridge and roller. The drum cartridge rotates as the paper is fed through. The mirror deflects laser beam across the surface of the drum. Laser beam creates charge that causes the toner to stick to the drum. As the drum rotates and presses on paper, toner is transferred from the drum to paper, creating images. Rollers then use heat and pressure to fuse toner to paper. Colored laser printers add colored toner in three additional passes.

Thermal printers use two types of printing technologies: direct thermal and thermal transfer printing. Traditional thermal printers use direct thermal method by pushing electrically heated pins against heat-sensitive paper (thermal paper). The coating on the thermal paper turns black in the areas where it is heated, producing characters or images. Direct thermal printers have no ink, toner or ribbon. These printers are durable, easy to use and cost less to print than other printers. However, the thermal paper is sensitive to heat, light, water, and abrasion and the text and images may fade over time. In thermal transfer printing, a thermal print head applies heat to a heat-sensitive ribbon, which melts ink onto paper and a wide range of materials to form text and images. The printouts can be extremely durable and can be stored over long period of time. Thermal printers are often used in cash registers, ATM and point-of-sales terminals. Thermal printer is not the same as thermal inkjet printer. The latter uses inkjet print technology by heating liquid ink to form vapor bubble, which forces the ink droplet onto the paper from the nozzle.

Plotters are large scale printers that are connected to a computer. They are typically used to print CAD (Computer Aided Drafting) drawings created by engineers and for banner advertisements and other large promotional materials. They are used mainly by industry and businesses who need a flexible, efficient and cost effective printing solution. There are several different models and manufacturers of plotters, including Gerber and Hewlett Packard, the computer company. 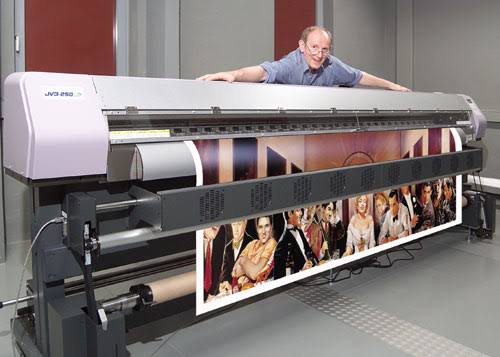 Speakers are attached to computers for the output of sound. Sound cards are required in the computer for speakers to function. Speakers range from simple, two-speaker output devices to surround-sound multi-channel units.