An information system is a collection of methods, practices, algorithms and methodologies that transforms data into information and knowledge desired by and useful for, individual and group users in organizations and other entities. This system can involve a combination of work practices, information, people, and technologies organized to accomplish goals in an organization. It can be classified into either data processing system or global positioning system.

A) Data Processing System: Data processing is any process that a computer program does to enter data and summarise, analyses or otherwise convert data into usable information. The process may be automated and run on a computer. It involves recording, analysing, sorting, summarising, calculating, disseminating and storing data. Because data are most useful when well-presented and actually informative, data-processing systems are often referred to as information systems. Nevertheless, the terms are roughly synonymous, performing similar conversions; data-processing systems typically manipulate raw data into information, and likewise information systems typically take raw data as input to produce information as output.

B) Global Positioning System: The Global Positioning System (GPS) is a space-based satellite navigation system that provides location and time information in all weather conditions, anywhere on or near the Earth where there is an unobstructed line of sight to four or more GPS satellites. The system provides critical capabilities to military, civil and commercial users around the world. It is maintained by the United States government and is freely accessible to anyone with a GPS receiver. GPS, or Global Positioning System, is also sometimes called NavStar. GPS is a satellite based global navigation satellite system, GNSS that is used to provide accurate location and time information anywhere on or near the Earth.

Typically GPS is able to provide position information to within a few metres, allowing accurate positioning to be made. It is also possible to extract timing information that enables frequencies and time to be very accurately maintained. Frequency stability performance figures of systems using GPS timing are far in better than crystal or many other accurate frequency sources. 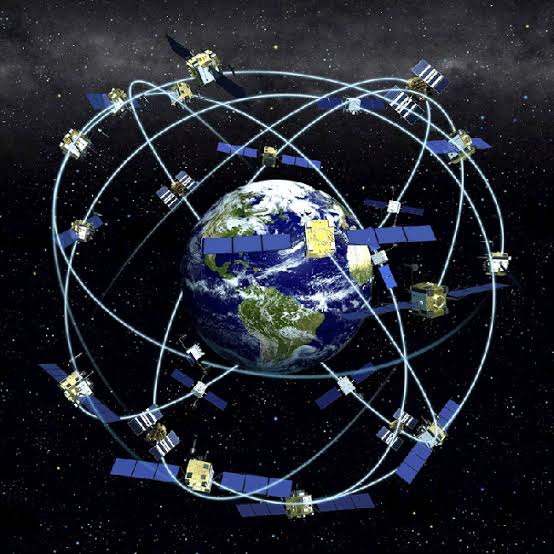 The fully operational GPS satellite system consists of a constellation of 24 operational satellites with a few more in orbit as spares in case of the failure of one. The GPS satellites are in one of six orbits. These are in planes that are inclined at approximately 55? to the equatorial plane and there are four satellites in each orbit. This arrangement provides the earth user with a view of between five and eight satellites at any time from any point on the Earth.

Using economic ground based receivers GPS is able to provide position information to within a number of metres. The economic costs have also meant that it is now fitted into many motor vehicles, while separate GPS receivers can be bought for a few hundred pounds or dollars. As a result it is widely used by private individuals, as well as many commercial and professional users. In fact the primary use for GPS is as a military navigation system. The fact that it is used so widely is a by-product of its success.

The satellites are orbiting above the Earth. Their orbits are tightly controlled because errors in their orbit will translate to errors in the final positions. The time signals are also tightly controlled. The satellites contain an atomic clock so that the time signals they transmit are very accurate. Even so these clocks will drift slightly and to overcome this, signals from Earth stations are used to correct this.

The GPS satellites themselves have a design life of ten years, but to ensure that there are no holes in service in the case of unexpected failures, spares are held in orbit and these can be brought into service at short notice.

A large number of GPS receivers are available today. They make widespread use of digital signalling processing techniques. The transmissions from the satellites use spread spectrum technology, and the signal processors correlate the signals received to recover the data. As the signals are very weak it takes some time after the receiver is turned on to gain the first fix. This Time To First Fix (TTFF) is of importance, and in early receivers it could be as long as twelve minutes, although modern receivers use many more correlators are able to shorten this considerably.

When using a GPS receiver the receiver must be in the open. Buildings, or any structure will mask the signals and it may mean that few satellites can be seen. Thus the receivers will not operate inside buildings, and urban areas may often cause problems.

The primary use for GPS is as a military navigational aid. It is run by the American Department of Defense and its primary role is to provide American forces with an accurate means of navigation anywhere on the globe. However its use has been opened up so that commercial and private users have access to the signals and can use the system. Accordingly it is very widely used for many commercial applications from aircraft navigation, ship navigation to surveying, and anywhere where location information is required. For private users very cost effective receivers are available these days and may be used for applications including sailing. Even many motor vehicles have them fitted now to provide SatNav systems enabling them to navigate easily without the need for additional maps.