The nervous system includes all the organs and tissues which enable animals to respond to changes in their environment. A change in the environment is called a response.

This is made up of the brain and the spinal cord. Both are made up of thousands of nerve cells or neurones. The functions of the central nervous system is correlation of impulses from various sense organs and storage of impulses as information or impressions in the brain for reaction to future similar stimuli.

a) The Brain: The brain is enclosed in a bony case called the cranium. It is divided into fore, mid and hind brain. 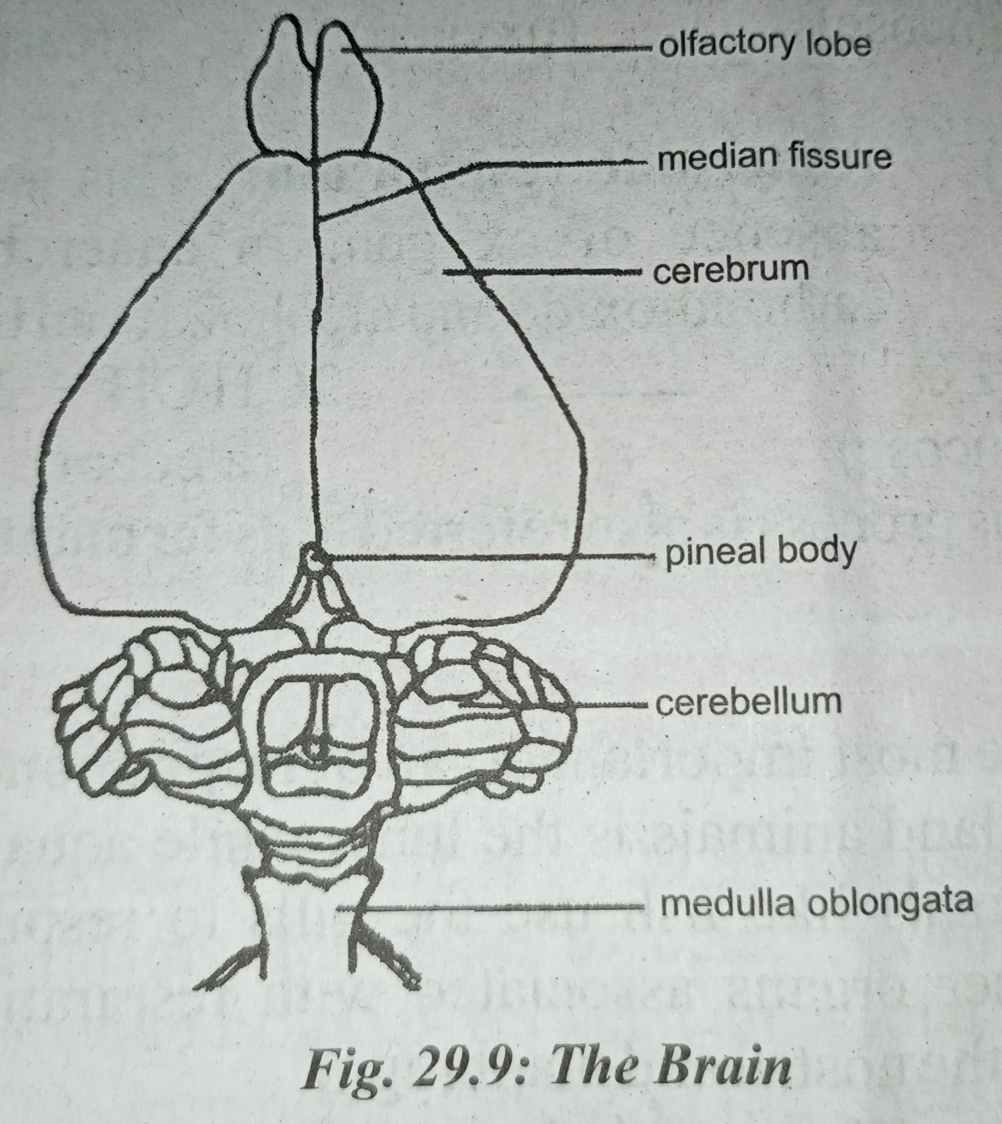 (b) The Spinal Cord: The spinal cord stems from the medulla oblongata and runs through the neural canal of the vertebral column or backbone. It communicates between the brain and other parts of the body. It controls all the reflex (involuntary) actions of the body.

A neurone (nerve cell) is the structural and functional unit of the nervous system. It helps in receiving and relaying or transmission of impulses. A neurone has three main parts: The dendrite, cell body and the axon (nerve fibre or axis cylinder).

The cell body has dendrites extending from it, and a central nucleus. The axon is surrounded by myelin sheath which is interrupted at intervals, forming nodes of ranvier. The axon terminates in dendrites. 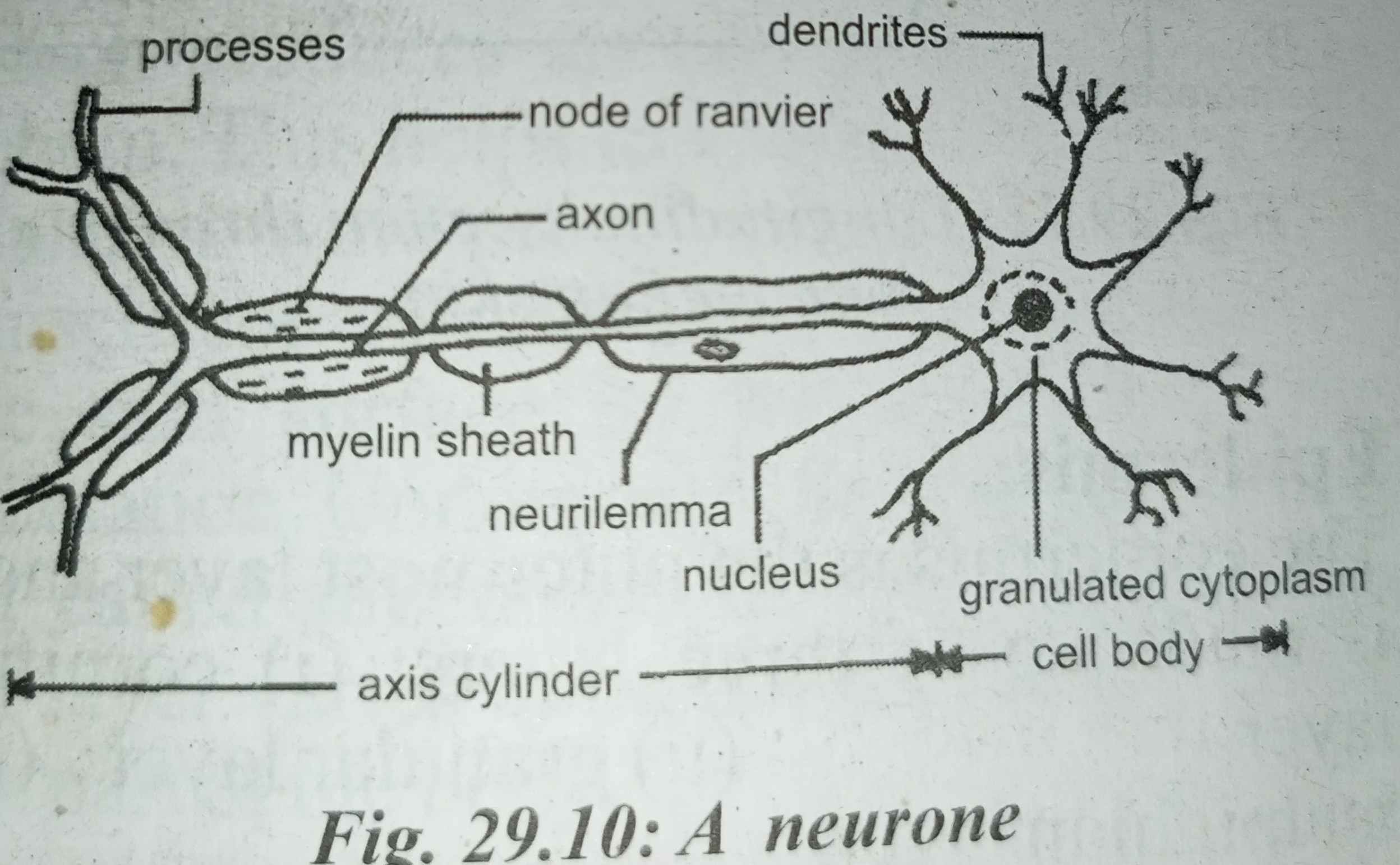 The dendrites usually receive messages and pass them to the cell body which then passes them (messages) out through the long axon to the dendrites of another nerve cell. However, there is no direct connection between the fibres of adjacent neurones. The junction between one end of a dendrite of one neurone and that of an axon of the next neurone is known as a synapse. The message passes from cell to cell across these synapses.

Reflex actions: These are actions carried out by animals in response to certain stimuli without first thinking or planning for them. They are not under the control of the brain. They are quick, automatic responses and entirely stereotype in nature. Examples of simple reflex or involuntary actions include:

Reflex Arc: A reflex arc is the path traced out by the impulses concerned in a simple reflex action. It consists of three neurones – an afferent, intermediate and efferent neurones. 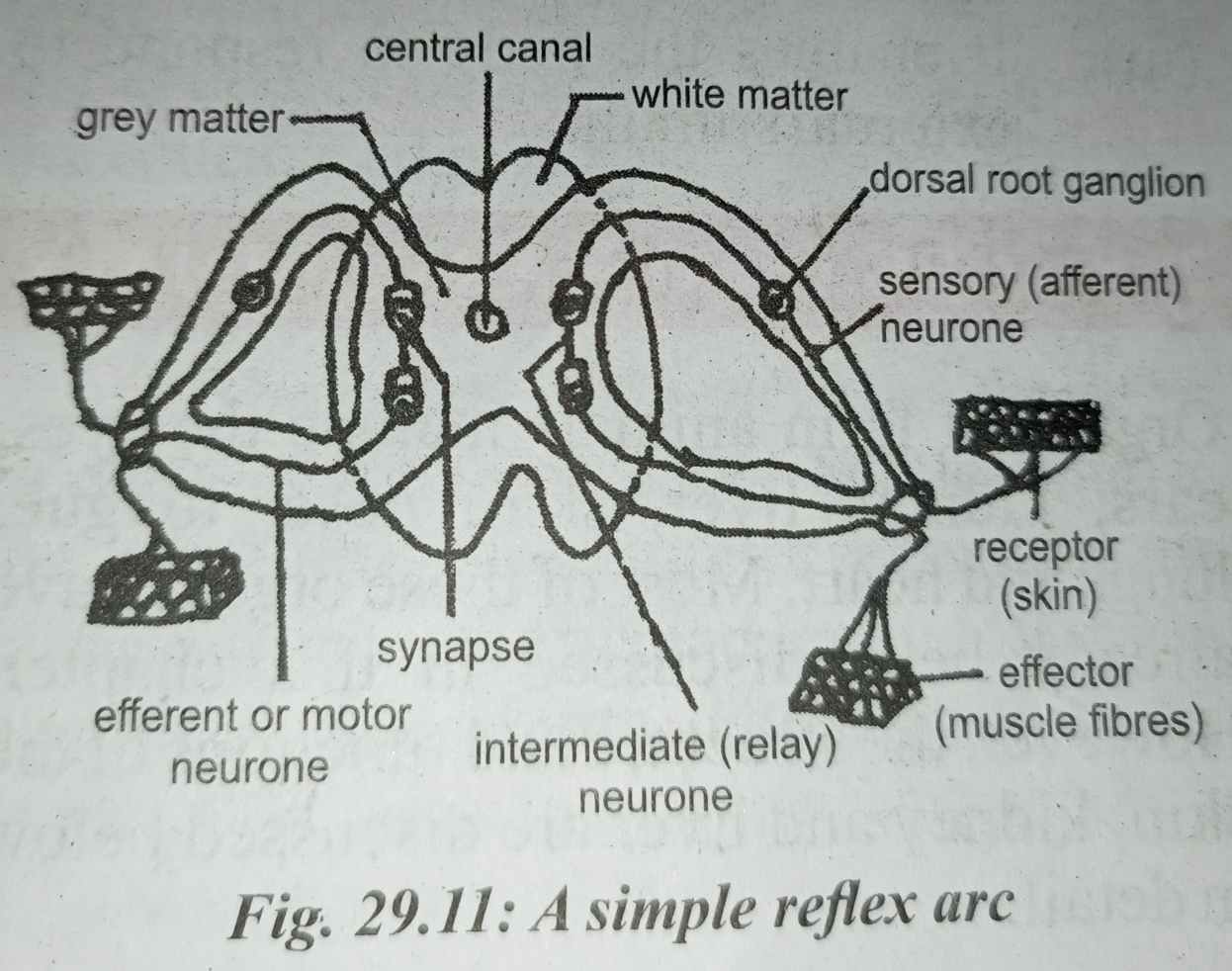 The message from the external stimuli is received by the sensory or receptor organs such as the skin in the case of sudden removal of leg from hot object. The stimulus is sent to the brain or spinal cord through the sensory or efferent neurone. The intermediate or relay neurone in the brain and spinal cord receives, transmits and interpretes the message. The interpreted message is then sent through the motor or efferent neurone to the organ or effector such as the muscle, which then causes the appropriate response, leading to the sudden withdrawal of the leg from the hot object.

The sense organs are the organs which receive stimuli and with the help of the brain (voluntary action), the message is received and interpreted. Hence, such organs enable animals to respond to stimuli within the environment.

The sense organs include:

Functions of the Nervous System