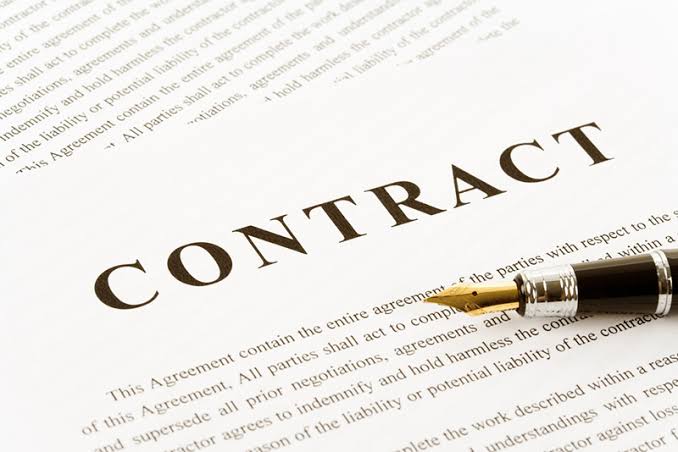 A contract can be defined as: “An agreement between two or more parties which is intended by them to have legal backing.” It can also be defined as an agreement creating an obligation, i.e ., a legal agreement between two parties. All contracts therefore involve some sort of agreement, but not all agreements are contract. The vital thing which turns an agreement into a contract is when the parties intend to be legally bound to carry out their agreements, e.g. sales, hire purchase etc. This can best be illustrated in the following cases:

Informal contracts are simple contracts which must possess all the essential characteristics of a valid contract. All contracts that do not belong to the formal contract mentioned above are referred to as informal contract and because of its flexibility it may be difficult to execute, e.g. contract of sales.

To be valid, a contract must possess the following essential characteristics or ingredients:

In a valid contract, a definite offer must be made by one party to the other and the offer must be unconditionally accepted. Acceptance must be absolute and once it is completed, it cannot be revoked. Advertising and invitation to tender, for instance, are not offers.

Characteristics of an Offer

An offer which is a definite promise to be bound on certain specific terms has the following characteristics:

Termination of an Offer

An offer can be terminated in the following ways:

Rules of Communication of Acceptance

The terms of an agreement must state clearly that the parties intended to create legally binding contracts. There must be no clause that will exclude the court, e.g. in the case of Merrit Vs Merrit, there was an intention to be legally bound.

3) There Must be Valuable Consideration

All simple contract must be supported by valuable consideration, that is, some elements of exchange which is measurable in money or money’s worth. The benefit to one party must be balanced by the benefit to the other. An agreement can become contract when each of the parties gives or promises to give something of value to the other party. Therefore, consideration can be defined as “the price for which a promise is bought.”

The consent of the parties involved in a contractual agreement must be genuine. Agreement of the parties to a contract must not be obtained under duress, undue influence, misrepresentation or mistake, e.g. Cummis Vs Ince (1847). In this case, an old lady was threatened with unlawful confinement in a mental home if she did not transfer certain property right to one of her relatives.

In the judgement, the court set aside the transfer since the threat of unlawful imprisonment amounts to duress. In the context of contract, duress means actual violence or threat to violence to a person while undue influence means, pressure or force not amounting to duress which prevents the party involved from exercising free judgement, whereas misrepresentation is interpreted to mean a false statement of a material fact made by one party to a contract or his agent which induces the other party to enter into the contract.

When a party has entered into a contract as a result of mistake, the contract can be voided if it is one of the facts and not of law or the mistake is so fundamental as to negate the agreement. A mistake can be operative or in-operative.

a) Inoperative Mistakes: These are mistakes that do not affect the validity of a contract. These are:

b) Operative Mistakes: The following mistakes will void a contract.

5) Legality of Objects of the Contract

The contract must be undertaken for legal purpose. Any contract in which the object is to commit crime or civil wrong, e.g. contract that is promoting sexual immorality, cannot be enforced by the court. Contract of sales of public offices, e.g. in the case of Pearce Vs Brooks(1866) , Pearce hired a carriage to Brooks knowing she was a prostitute, later when Brooks did not pay, Pearce sued to recover the hiring charges. The court declared the contract void and thus Pearce could not recover the hiring charges.

6) The Parties Must Have Contractual Capacity

a) Contract Binding on a Minor (Under 18)

b) Contract Void Against a Minor

The terms of the contract must be clearly stated. The parties can expressly state every term of their contract. A contract may contain two types of clauses, namely, express and implied terms.

b) Implied Terms: These are terms which are left to be deduced from the surrounding circumstances. It may be implied by custom, statutes or courts.

The parties to a contract can enter into a contract once they are sure that they can do the job. It must be possible to carry out the contract.

9) Formality of a Contract

A contract can be discharged or brought to an end in the following ways:

REMEDIES FOR BREACH OF CONTRACT

The injured parties can sue for: