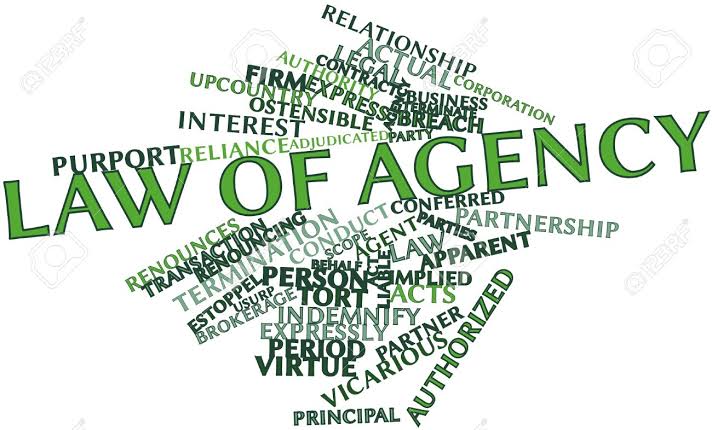 An agent is a person who is given the authority by the principal to enter into a contract on his behalf. The agent has the power to make a binding contract between his principal and a third party without himself becoming a party to the contract.

1) Universal Agent: This is an agent who has unrestricted authority to enter into a contract on behalf of the principal. He may even perform acts that his principal could have performed. This kind of agent is appointed by a deed known as power of attorney.

3) Special Agent: This is an agent appointed for a particular purpose, normally not part of his normal business activities, and is therefore given only limited powers.

4) Del Credere Agent: This is an agent who undertakes to indemnify the principal against any loss arising from the failure of the people to pay for goods sold. He receives in return extra remuneration which is higher than all other agents. A del credere agent guarantees payment to his principal for goods sold on his principal’s behalf and for which he receives additional commission known as del credere commission.

5) Commission Agent: This is a merchant who buys and sells goods on commission. This agent usually exercises physical control over and negotiates the sale of the goods which are handled by him.

6) Factor: This is an agent who is employed to sell goods delivered to him by the principal for a commission. He has possession of the goods and can sell in his own name.

Features of a Factor

Features of a Broker

8) Auctioneers: These are agents authorised or empowered by the law to sell goods for their principal at a public auction to the highest bidder.

Features of an Auctioneer

9) Advertising Agent: These are agents whose roles include assisting the firm in planning and executing their advertising programmes. More specifically, the agent advises clients on advertising strategies, creates advertising copy, supervises advertising production and buys air time and media space to place their clients’ adverts.

10) Manufacturers Agent: These are representatives or firms chosen by a manufacturer to market its goods in a certain area. The manufacturer will pay them commission and they can represent more than one producer at a time. Moreover, they are sellers who act on behalf of a manufacturer. Sometimes they accept responsibility for any credit risk.

11) Shipping and Forwarding Agents: These are agents that act on behalf of the principal to clear and receive goods from the seaports or airports. The agents will arrange for the delivery of the goods to a particular place through the air, sea or land.

Differences between a Factor and Broker

Agents can be appointed in the following ways:

DUTIES OF AN AGENT

A good agent must perform the following duties:

What an Agent Cannot Perform

Rights of an Agent

A principal is the person who employs another person called, agent to act on his behalf. A principal contracting through an agent must have contractual capacity.

Duties of the Principal

These are the duties owed by the principal to his agent:

Rights of the Principal

Agency can be terminated on the following grounds: