Vulcanicity is formed when molten rock or magma forces its way into planes of weakness or vent of the earth’s crust to escape quietly or explosively to the surface.

The magma, while moving through the vent to the earth’s surface may cool and solidify within the crust or before it gets to the surface of the earth as Plutonic rocks, leading to intrusive land forms.

On the other hand, when the magma reaches the surface of the earth, it cools and solidifies as volcanic rocks, and results in extrusive land forms. Rocks, formed by either plutonic or volcanic activity are called igneous rocks.

Formation of Dyke: A dyke is formed as cracks and joins. This molten magma then cools off and becomes solidified to form vertical and narrow walls of igneous rock with shallow trenches formed when exposed to denudation.

Composite cone is made up of alternate layers of ash and lava. The lava pours out forming layers on top of the ash. In minor eruption, lava moves out from the sides and conelets are built while new eruption form new layers which grow gradually with increasing cano blows off or sinks, e.g. Chimborazo, while a large crater called Caldera may finally emerge at the point of Volcano.

There are three main types of volcanoes. These are active, dormant and extinct volcanoes. 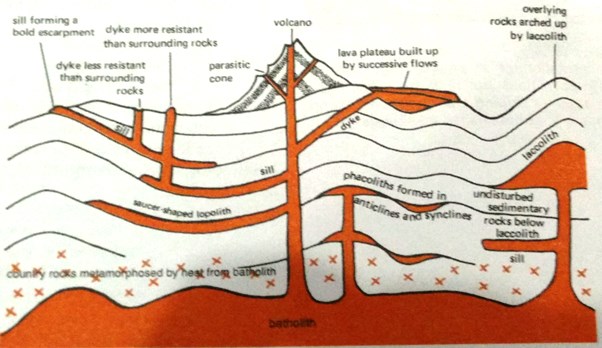