Division of labour is defined as the breaking down of a production process into a number of separate operations, whereby each operation is undertaken or performed by one person or a group of persons.

Division of labour is a complex process mainly practised in industrialised communities where a worker specialises in the production of a small portion of a product and he may not see the end product and may not make use of it. Division of labour, for example, exists in the publishing industry where each worker or group of workers or individuals are involved in writing of manuscript, typing of manuscript, editing, filming and plating, printing, folding, collating, sewing, binding and finally trimming. It is the joint effort of all these groups of workers that enables a complete book to be produced.

Specialisation is defined as the concentration of the productive efforts of an individual, a firm or a country in a given aspect of economic activity or on a particular line of production in which it has the greatest advantage over others. Specialisation is the performance of a single job or economic activity in which an individual, firm or a country has comparative advantage.

TYPES OF SPECIALISATION AND DIVISION OF LABOUR

ADVANTAGES OF DIVISION OF LABOUR AND SPECIALISATION

The above factors or advantages will encourage entrepreneurs to adopt division of labour in production.

DISADVANTAGES OF DIVISION OF LABOUR AND SPECIALISATION

LIMITATIONS TO DIVISION OF LABOUR AND SPECIALISATION

DIVISION OF LABOUR AND EXCHANGE

It is often said that division of labour necessitates exchange. Division of labour in this case refers to specialisation, that is the concentration of individuals, firms or geographical areas in the production of a particular commodity.

A firm may be defined as an independently administered business unit which is capable of carrying out production, construction or distribution activities. It forms an industry with other firms performing or producing complementary goods and services. Firms may be small or large depending on capital outlay and the level of production.

Characteristics of small and large firms

The characteristics of small and large firms are summarised in the table below. 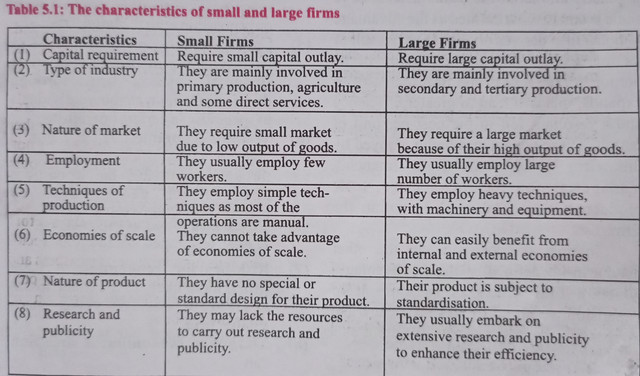 ECONOMIES OF SCALE OR SCALE OF PRODUCTION

Economies of scale can be defined as the growth of a firm as a result of the expansion of the volume of productive capacity resulting in the increase in output and a decrease in its cost of production per unit of output.

Types of economies of scale

There are two major types of economies of scale. These are:

Save
Tags: and, division, economics, labour, of, production, scale, specialisation