Reproduction is the ability of living organisms to give rise to new individuals of the same species. The purpose of reproduction is to ensure the continuity of life.

There are two major types of sexual reproduction. These are conjugation and fusion of gametes.

Conjugation is a simple type of sexual reproduction which occurs in some lower organisms such as Mucor, Rhizopus, Paramecium and Spirogyra. Conjugation is the process by which nuclear material is passed from one cell to another. 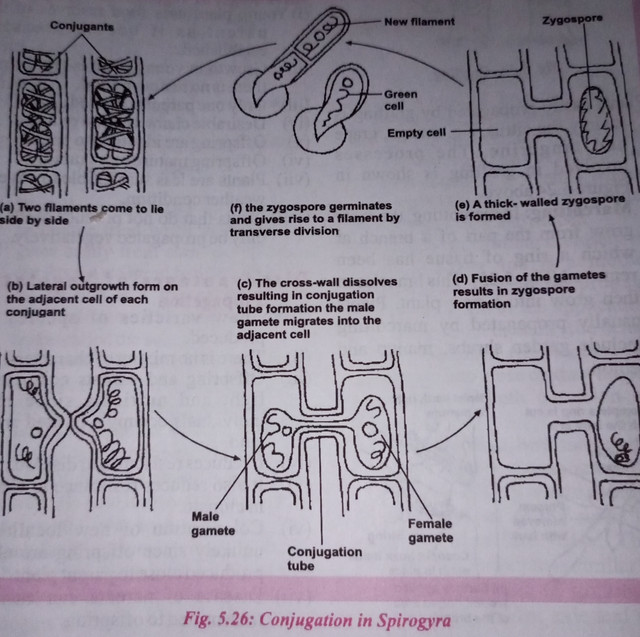 In Spirogyra, for example, conjugation starts with two filaments called conjugants coming together to lie side by side. Lateral outgrowth starts to develop opposite each other from opposite cells in the two filaments. The outgrowth meets and the separating walls dissolve to form a continuous channel called conjugation tube. Meanwhile, the cytoplasm of each cell shrinks away from the cell walls and round up to form a gamete.

One of the gametes regarded as the male migrates through the conjugation tube into the other cell. The cytoplasms of the two cells fuse, the nuclei also fuse and a zygote is formed. After sometime, the zygote or zygospore will germinate and a new filament is formed.

Fusion of gametes is the union of the haploid male and female gametes to produce diploid organisms called zygote. The process of this union of the gametes to form this zygote is called fertilisation.

In higher animals, these gametes are formed in special organs called gonads. The male gametes called spermatozoa or simply sperm are produced in the testes by a meiotic cell division called spermatogenesis. In like manner, the female gametes called ova or eggs are produced in the ovary also by a meiotic cell division called oogenesis. These male and female gametes are brought together during mating and they unite or join together by a process of fertilisation to form a diploid zygote which later develops into a new organism.