The word “noun” is derived from the Latin word. “nomen”, which means name.

But modern linguists now define nouns as words that take noun inflections; that is, words which can fit into the following inflectional paradigm:

Both definitions are useful. But, for the purpose and level of our present lectures, we shall largely adopt the former as a convenient pedagogical procedure. Based on this working definition, we agree with traditional grammarians that two major classes and five subclasses/kinds of nouns exist, as shown below

These are names of things that can be counted. They have both singular and plural forms, and they are usually preceded by determiners (e.g. a, an, he, some) and numerals (e.g. one, two, three). Examples of countable nouns are book, table, pen, dog.

Although proper nouns have unique existence and as such do not make distinction in number, surnames of individuals can be used in the plural form, preceded by a definite article (the), to refer to either all the members of a family or to a man and his wife. Examples: The Ezes (i.e. members of Eze’s family)/The Ezes (i.e. Mr. and Mrs Eze).

Common nouns are names that are shared in common by people or things of the same kind. They are usually inflected for plurals. Except where they begin sentences, common nouns are not begun with capital letters. Some examples of common nouns are: girl, boy, book, fan, radio, plate, plant, tree, dog, etc. Ngozi is a good girl but Chinenye is a bad girl (singular). Both of them are girls (Plural).

Collective nouns are names given to a group of people or things considered as a single entity. Examples are cattle, class, clergy, committee, constellation, crowd, crew, executive, family, fleet, flock, gang, gentry, government, herd, jury, mob, police, regiment, swarm, staff, team, troop, troupe, youth. The collective noun is seen as a singular noun; it is used with a singular verb (e.g. The executive is ready for the meeting). But when seen as a plural noun, it is used with a plural verb (e.g. The executive are ready for the meeting).

NOTE: When a collective noun is used with a plural verb, it is called Noun of Multitude. For a pure’ collective noun, therefore, all the items in the group are seen together as a single unit, requiring a singular verb. But in a NOUN OF MULTITUDE, all the items in the group are thought of as many individuals, requiring a plural verb. However, one is expected to be consistent in usage, sticking to either of the two variants in his writing.

Uncountable (mass) nouns are names of things and ideas that cannot be counted. They are not preceded by indefinite articles (a, an) and determiners (each, every, another, these, those, several, many). But they are preceded by much and little. They do not inflect for plurals; that is, they do not take the plural marker “-S”. They are regarded as singular nouns and are, therefore, used with singular verbs.

An abstract noun is the name of a quality, state, or action. It is uncountable by nature, and as such, it obeys the rules of uncountable nouns. Examples of abstract nouns include: beauty, goodness, kindness, humility, wisdom, manhood, womanhood, boyhood, poverty, childhood, flight, laughter, pity, etc. These nouns are normally not pluralized nor are they used with indefinite articles a and an. But if you see them used in the plural sense or preceded by the indefinite article (a/an), then note that their meanings have changed to kinds or kind of the quality, state, or action being discussed.

We can form abstract nouns from adjectives, or from common nouns, or from verbs, by syllable suffixation. See the following examples: 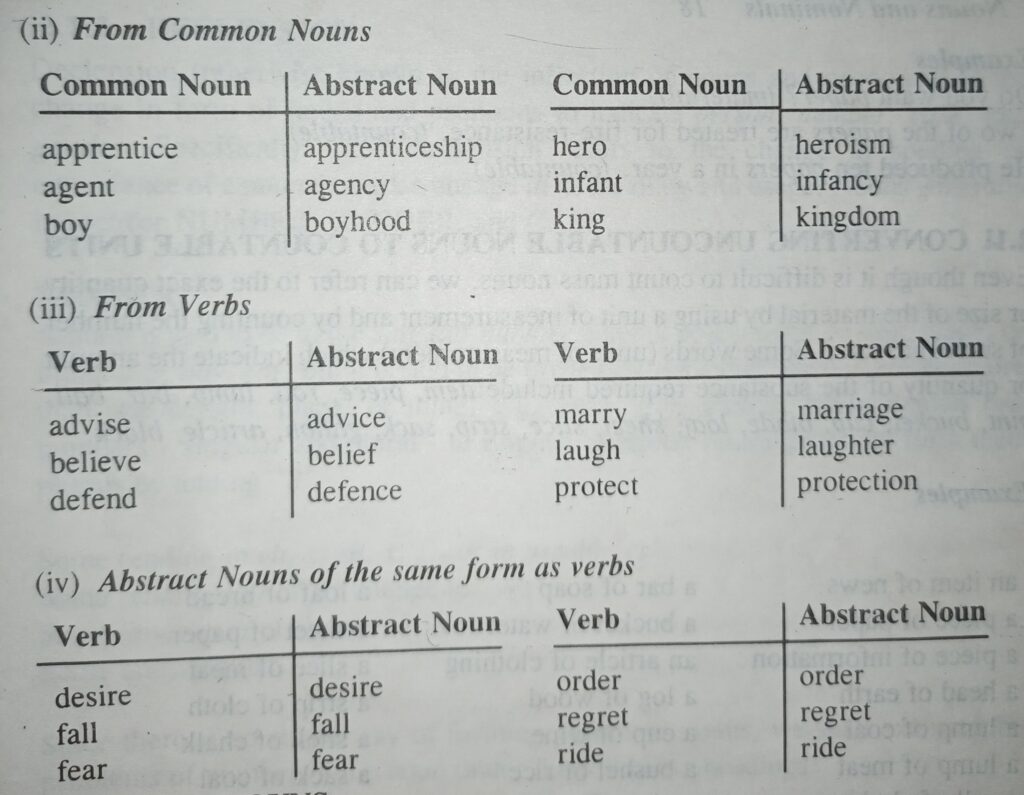 A material noun is the name of a matter or substance of which a thing is made or produced. Examples of material nouns are gold, glass, paper wood, tar, fruit, apple, cloth.

Although material nouns are classified as uncountable, many words in this group can be used as both uncountable and countable nouns:

Notice that when a material (uncountable or mass noun) is converted to a countable noun, the count noun so derived refers to a special kind, variety or brand of the material/substance from which it was derived.

Even though it is difficult to count mass nouns, we can refer to the exact quantity or size of the material by using a unit of measurement and by counting the number of such units used. Some words (units of measurement) which indicate the amount or quantity of the substance required include:item, piece, roll, lump, bar, ball, pint, bucket, cup, blade, loaf, sheet, slice, strip, sack, gallon, article, block.

Save
Tags: etc, nouns, they