Verb idiomsare variously referred to as group verbs, multi-word verbs or phrasal verbs, or action/being referent idioms. Some begin with verbs and end with adverb particles or prepositions [e.g. get at (reach), get off (escape), get through (succeed), hails from (belongs), go for (attack), make up for (compensate), etc] ; others begin with full or bare infinitives (verbs) and end with nouns, as exemplified below:

For purposes of pedagogic convenience and clarity, we shall treat verb idioms under two broad subdivisions as follows:

The adverb particle-/preposition-ended verb idioms are treated here under phrasal verbs while the noun-ended idioms are considered under action/being referent idioms.

A phrasal verb is a combination of:

Although a phrasal verb-takes the pattern of a phrase, it functions as a single verb and can, therefore, be replaced by a single verb wherever it occurs in a sentence. By the three patterns of combination identified in the formation of phrasal verbs, we can consider phrasal verbs under the following categories;

Notably, a primary phrasal verb may be transitive or intransitive. When transitive, it takes an object. But when intransitive, it takes no object. Another remarkable feature of a primary phrasal verb is that its adverb(ial) particle is mobile, capable of taking different positions (front, middle, or terminal) in the sentence; for instance, “Obiageli turned off the tap / Obiageli turned the tap off”. Other examples of primary phrasal verbs include: turn down (reject), write off (declare unwanted), cheer up (be comforted/become happier), fall of (diminish in quality, goodness or value), run over (crush).

It is, however, pertinent to add that some primary phrasal verbs are used idiomatically while many others are not used idiomatically. Those that are considered as idioms are only a minority, and wherever they occur, each of them is treated or learnt as a single expression, not to be understood in terms of the meanings of its parts. Below are a good many examples of idiomatic phrasal verbs:

A secondary phrasal verb, otherwise known as a prepositional verb, is a combination of a verb and a preposition. It can be replaced by a corresponding verb and it is always used transitively in the sentence (e.g. Ngozi looks after her old parents.)

A tertiary phrasal verb is made up of a verb, an adverb particle, and a preposition. Like other phrasal verbs, it performs the function of a single verb and can thus be replaced by a verb. It is used transitively, and being an idiom, its meaning must be learnt as a whole.

It should be noted that the addition of a preposition to a primary or secondary phrasal verb implies a wide range of structural and semantic differences, as shown below: 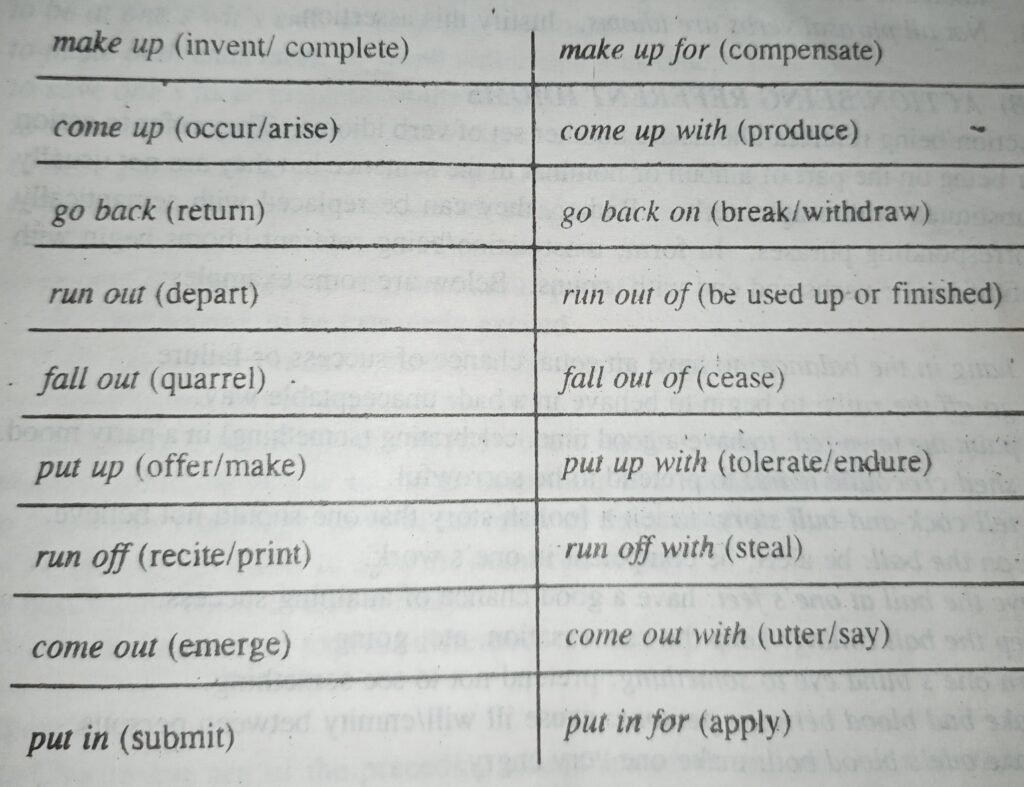 It is pertinent to note that not all combinations of verbs and adverb particles/ prepositions are idiomatic. Consider the following examples:

Action/being referent idioms are another set of verb idioms. They refer to action or being on the part of a noun or nominal in the sentence but they are not usually substituted with single verbs. Rather, they can be replaced with semantically corresponding phrases. In form, most action/being referent idioms begin with infinitives or verbs and end with nouns. Below are some examples: