The reproductive system includes all the organs and tissues concerned with reproduction in animals.

REPRODUCTIVE SYSTEM IN MAMMALS AND POULTRY

The male reproductive system includes the testes which produce the spermatozoa and sex hormone called testosterone which aids the development of male sexual secondary characteristics. The spermatozoa are specifically produced in the seminiferous tubules of testes during meiotic cell division by a process called spermatogenesis. The testes are suspended or protected by scrotal sac (scrotum) outside the abdominal cavity to enable sperm cells to be produced at desired temperature. 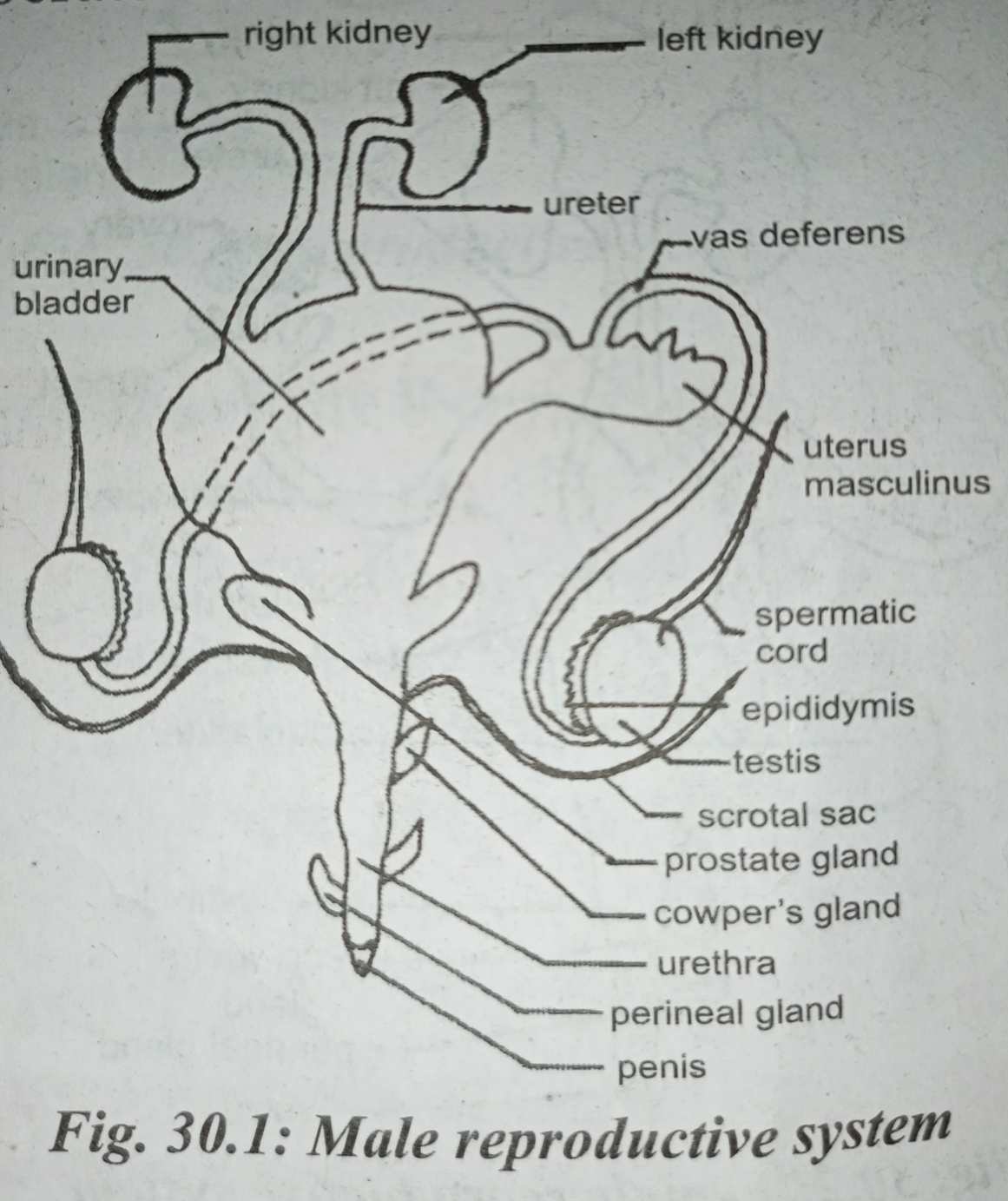 The epididymis ensures the storage and maturation of sperm cells in the testes. The testes are connected to the uterus masculinus by vas deferens which transports sperms from testes to the uterus masculinus where matured spermatozoa are stored until they are released during coitus or mating. Blood vessels called spermatic cord supply nutrients and oxygen to the testes. Located along the urethra are accessory glands which are the Cowper’s gland, seminal vesicle and prostate glands. They produce slimy alkaline fluid which aids the movement of spermatozoa. This fluid together with the spermatozoa results in the formation of semen. The urethra is a uro-genital organ which helps to inject sperms into the vagina as well as the removal of urine. The urethra ends externally in penis.

The female reproductive system includes the ovaries which produce the ovum or ova (eggs) enclosed by the graffian follicles and some hormones such as the oestrogen. 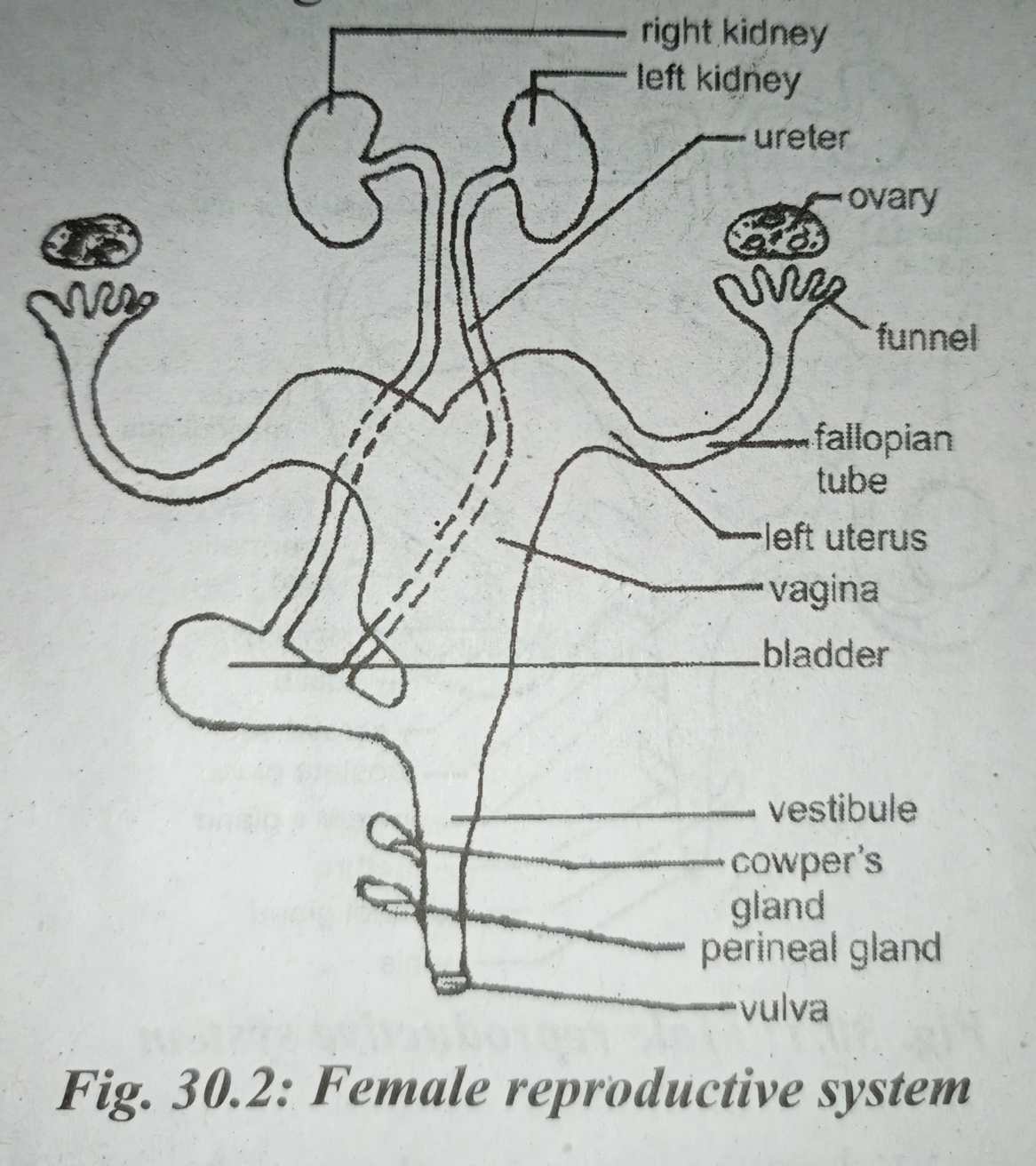 A matured egg or ovum is released from the follicle in the ovary into the oviduct. This process is called ovulation.

As the ovum or egg is released from the ovary, the female animal comes into ‘heat’ and is willing to mate with the male animal.

Fertilisation, which is the fusion of the male sex cell (spermatozoa) and the female sex cell (egg or ovum) takes place in the fallopian tube or the oviduct. When the egg is fertilised by the spermatozoa, the fertilised egg anchors itself to the wall of the uterus. This process is called implantation. The development of the foetus takes place in the uterus. Below the uterus is the vagina which receives the spermatozoa during copulation. The female reproductive system terminates with an external opening called the vulva.

Development of the Embryo (Foetus)

The fertilised egg is implanted in the uterus where the development of the embryo takes place, Soon, a number of embryonic membranes develop round the embryo. These are: the chorion, the allantois and the yolksac. The amnion forms a sac in which the embryo lies and is filled with amniotic fluid. Hence, the embryo is held in a liquid environment which acts as a buffer or “shock absorber”. This ensures the protection of the embryo.

This ensures the protection of the embryo. The allantois forms a sac which is excretory, respiratory and nutritive in function. It contributes to the formation of placenta. The yolk sac provides the food during the early stages of embryonic development. The chorion forms the outermost membrane, enveloping all these structures. 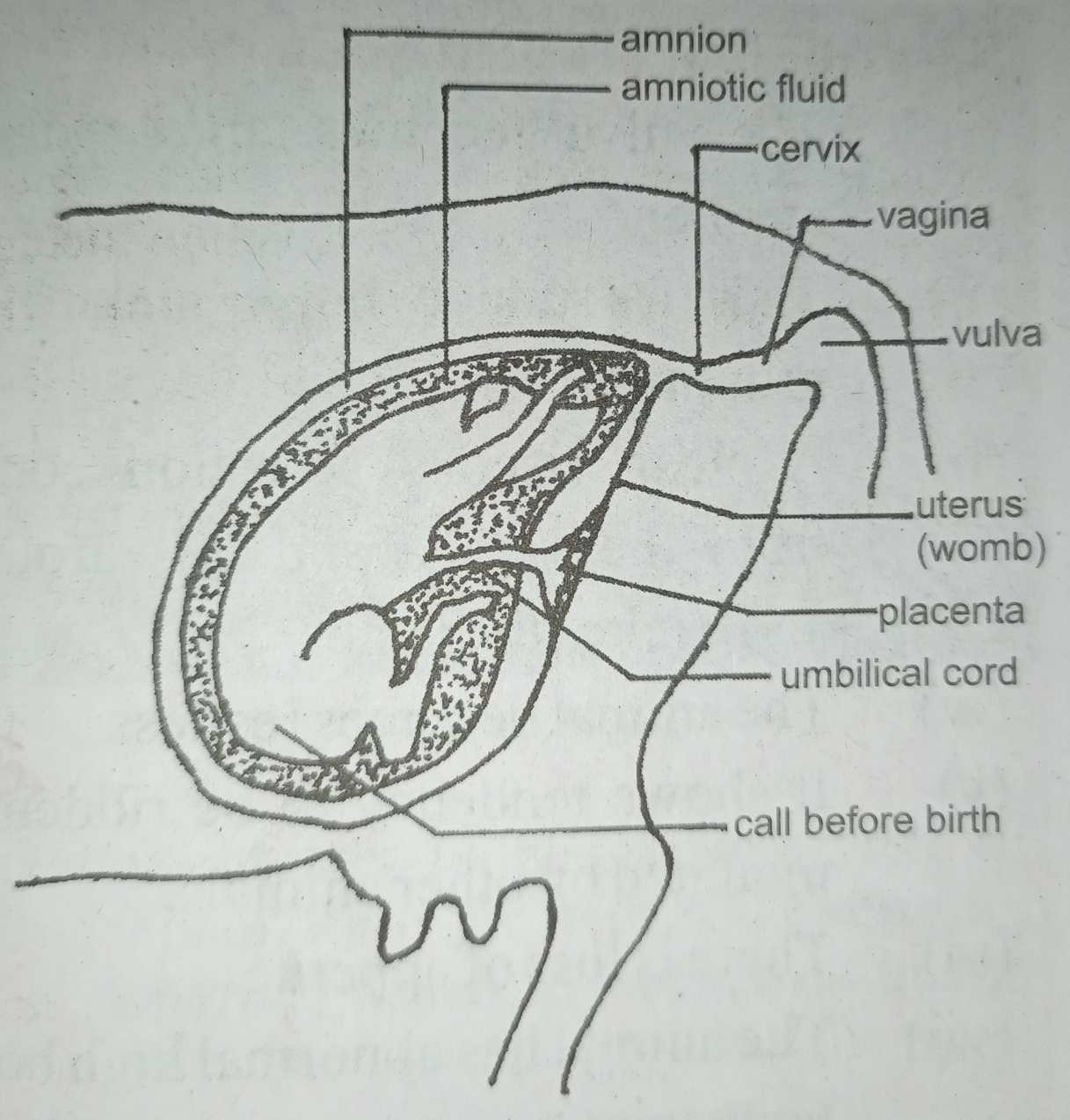 At the end of the gestation period (from fertilisation to birth), parturition (giving birth) takes place during which the young animal is pushed out through the vagina. The remaining part of the embryonic membrane known as after-birth is sent out after the birth of the foetus.

In the male bird, the two testes are located inside the body. A narrow tube connects them to the cloaca in which the tube ends as a small raised papilla.

In the female, only the left ovary is functioning. The single ovary produces ova (eggs) in capsules attached to the ovary by short stalks. The ovary also produces the yolk.

The infundibulum receives the yolk released by the ovary. Albumen and chalaza (which hold the yolk and germ cell in position) are formed in the magnum. The two shell membranes and the shape of the egg are formed in the isthmus. The egg shell is finally formed in the uterus after which the egg is laid through the cloaca. Fertilisation of the egg can take place as soon as the egg enters the oviduct when spermatozoa are present.

Fertilization occurs before the formation of the albumen. 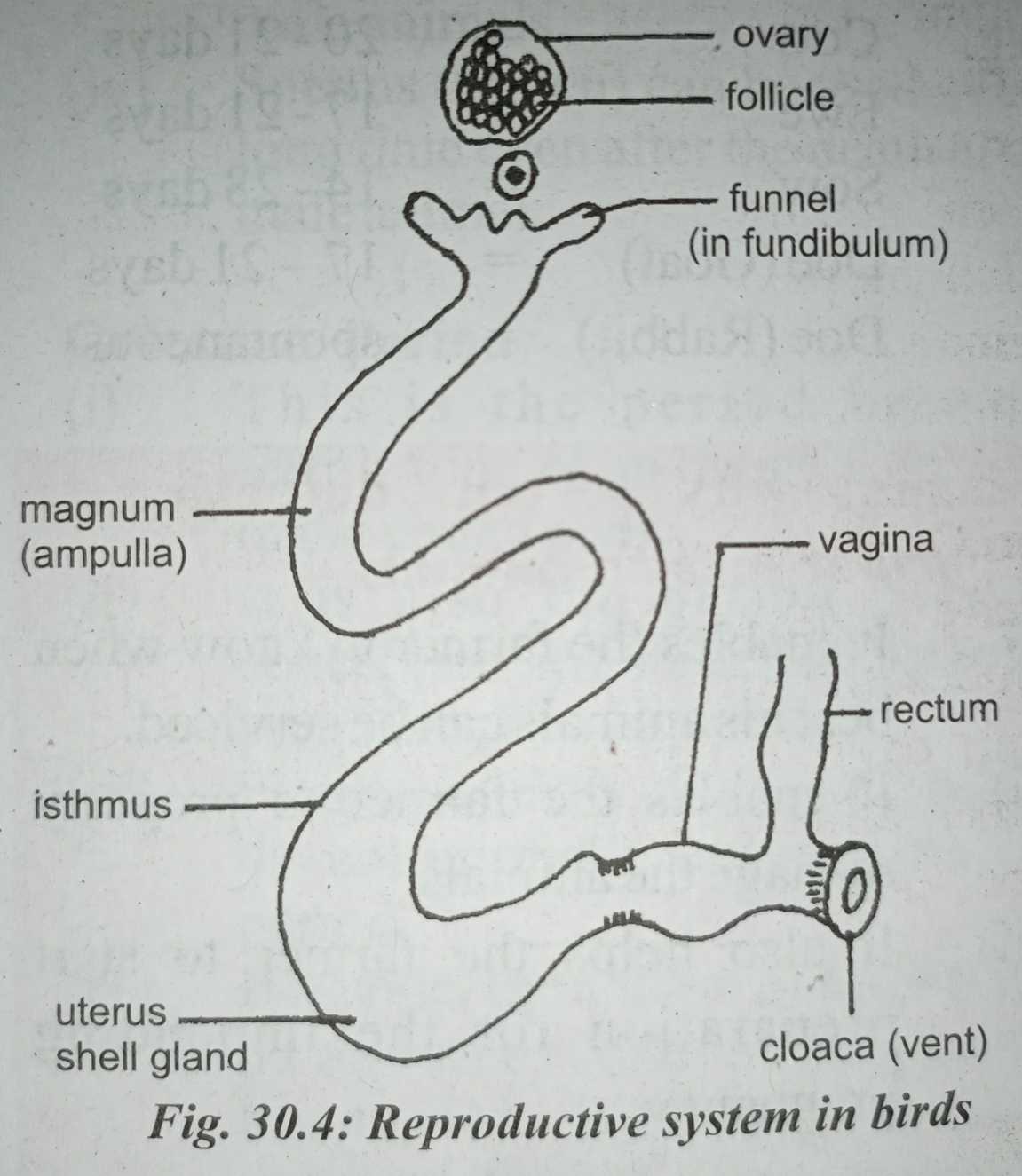 Functions of the Reproductive System