Anatomy refers to the form and structure of the body while physiology refers to the functions of the forms and parts of the body. It is very important for the farmer to understand the anatomy and physiology of farm animals because it will enable him to know more about the nutrition, reproduction and management of his animals.

The body of farm animals is divided into four major groups. These are:

Some of the systems which maintain the body are:

The digestive system of a farm animal includes all the organs and tissues associated with the breaking down or digestion of food in the body. It includes the teeth or beak, tongue, the alimentary canal or digestive tract and all the associated gland, secretory enzymes and other body fluids.

Farm animals are grouped into two main classes based on the nature of their alimentary canal or digestive tract. These are:

Functions of the first compartment (the rumen) of the stomach of a ruminant are:

Examples are the cattle, sheep and goat. They are all herbivores.

Ruminant animals like cattle, sheep and goat feed mainly on grasses and they can ruminate or chew the cud because of the complex nature of their stomach. 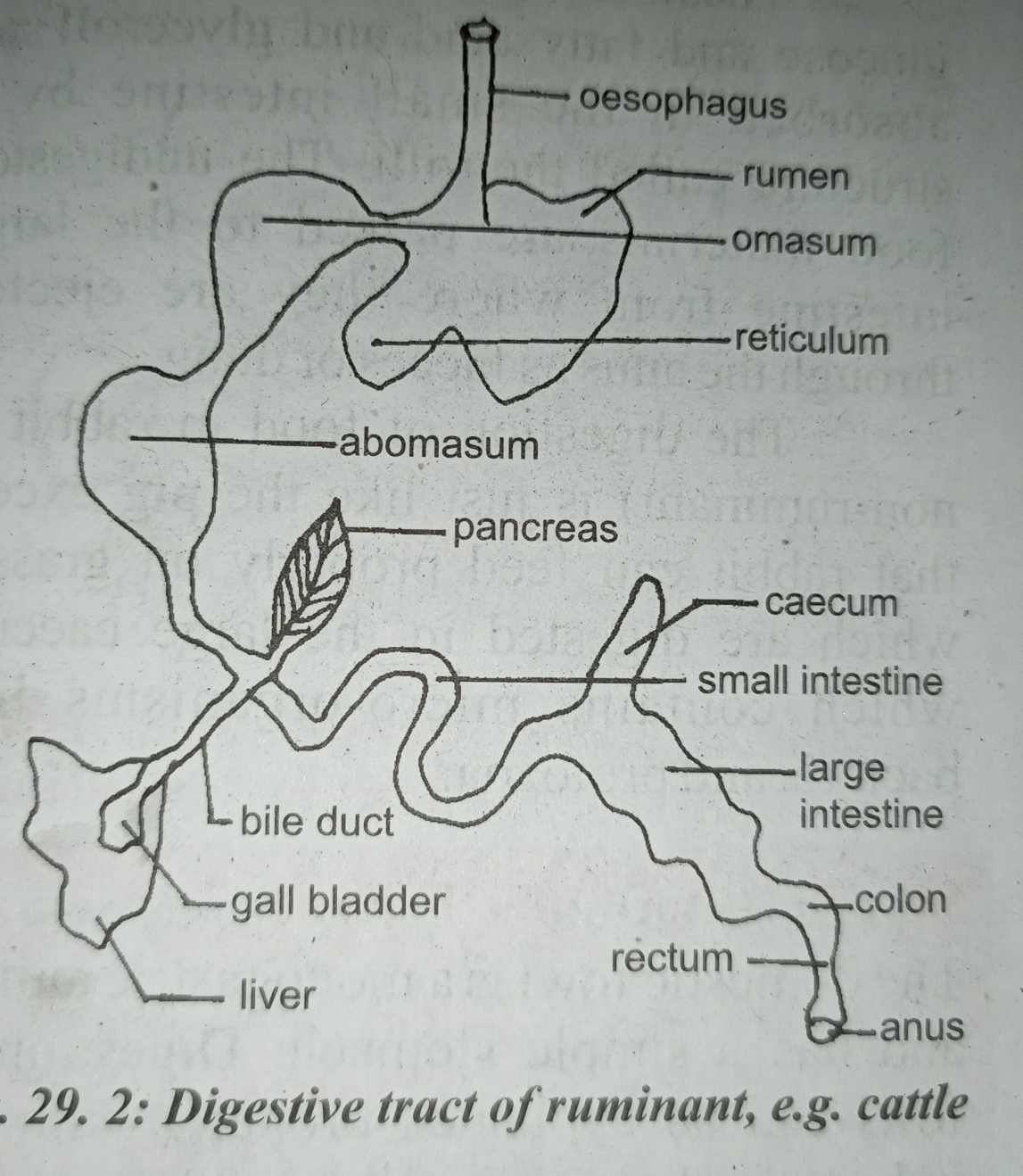 When a ruminant animal like a cow wants to feed, it cuts the grass and swallows it with minimal chewing. The grass passes from the mouth through the oesophagus to the rumen where the grass is stored. In the rumen, the grass is acted upon by microorganisms like bacteria and protozoa which digest the cellulose and synthesize some amino acids needed by the animal from non-protein nitrogenous substances.

When the cow has finished filling the rumen, it finds a cool place and lies down quietly. By anti-peristaltic movement of the stomach, the undigested grass passes from the rumen to the reticulum from where it re-enters the oesophagus (regurgitate) back to the mouth. The food is now chewed properly by using the molar and premolar teeth (chewing the cud) into a semi-liquid cud which is re-swallowed. This liquid cud now moves into the omasum from where it passes to the abomasum (the true stomach). The whole process is called. rumination.

In the abomasum, enzymes are secreted which act on the food. Further digestion and absorption of the food take place progressively along the digestive tract. The digested food is then absorbed into the blood through the villi in the small intestine while the undigested food passes to the large intestine where they are removed through the anus as dung or faeces.

Pig has only one stomach. It does not chew the cud neither does it utilise roughages

properly. The digestion in pig can be understood properly with the aid of the diagram. 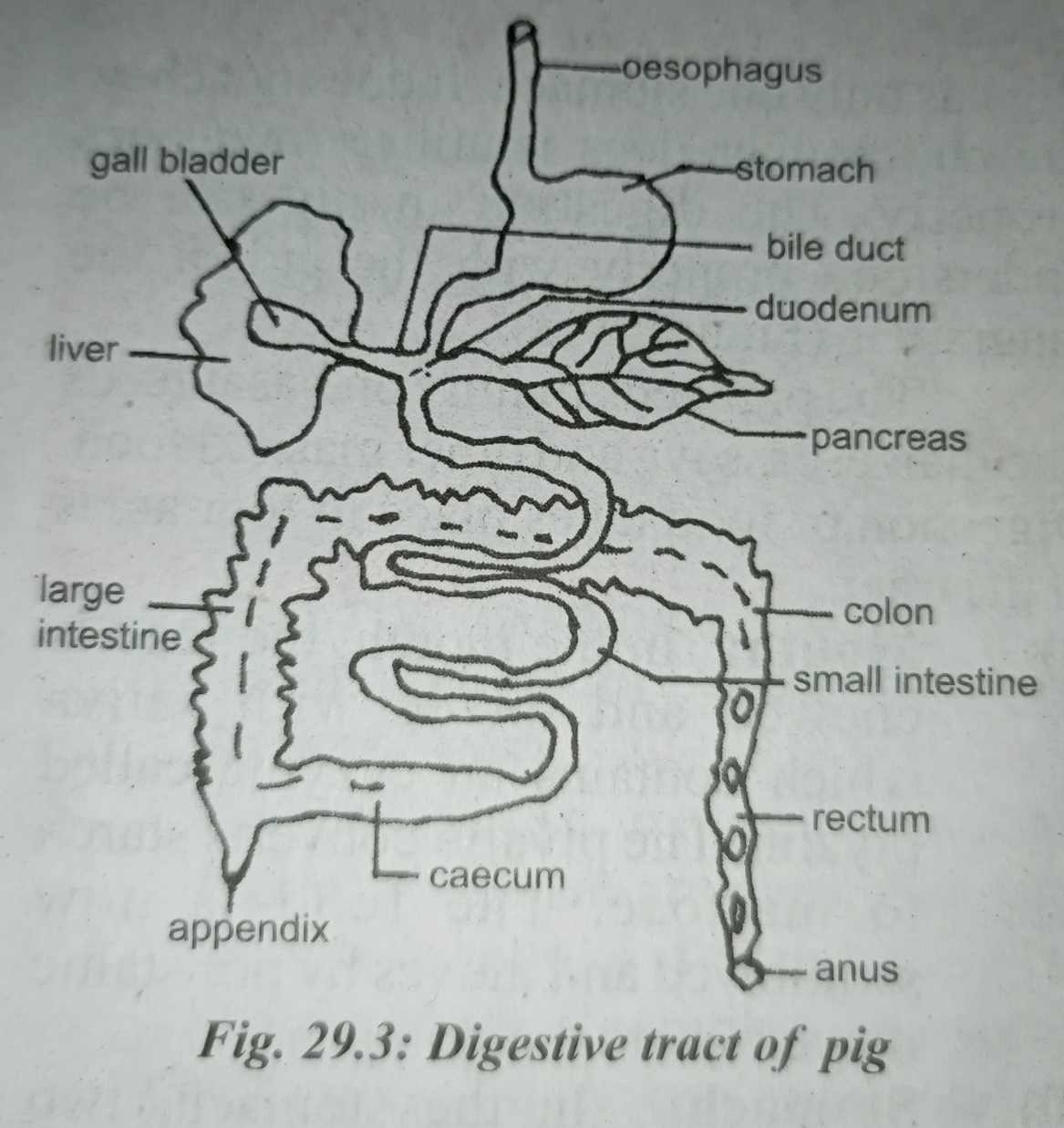 The pig feeds mainly on basal feeds like maize, cassava and other mashed food. Digestion of food takes place in four areas of the tract:

4. Small Intestine: The wall of the small intestine secretes many enzymes which complete the process of digestion.

The end product in the digestion include the conversion of:

These end products (amino acids, glucose and fatty acid and glycerol) are absorbed in the small intestine by a structure called the villi. The undigested food materials are passed to the large intestine from where they are ejected through the anus as faeces or dung.

The digestion of food in rabbit (a non-ruminant) is just like the pig except that rabbit can feed properly on grasses which are digested in the large caecum which contains micro-organisms like bacteria and protozoa.

The domestic fowl is a monogastric animal and has a simple stomach. Digestion in fowl can be explained properly with the help of the diagram. 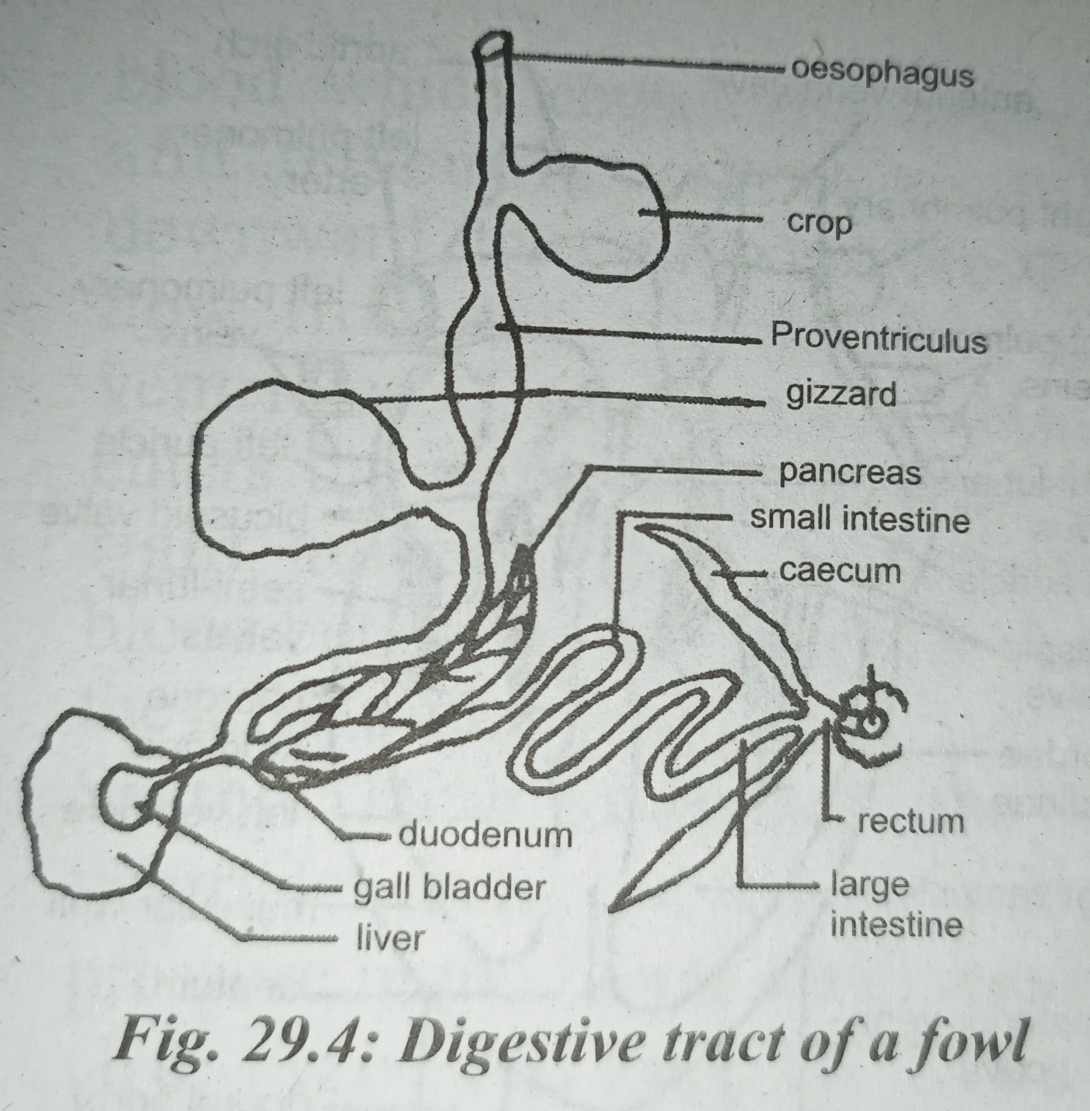 The fowl has no teeth but the food is picked up by the beak. This food then passes on to the crop through the oesophagus. This food is stored temporarily in the crop where it is moistened and fermented by some bacteria. The food now passes on to the proventriculus where digestive enzymes are secreted on the food.

The proventriculus is often regarded as the glandular stomach because it secretes digestive enzymes on the food like pepsin and amylase.

From the proventriculus, the food moves to the gizzard where grinding takes place. With the aid of small stones or grits, the food is ground by the gizzard. From the gizzard, the food now moves to the duodenum and small intestine where further digestion and absorption take place while the undigested food materials are removed from the tract as faeces.