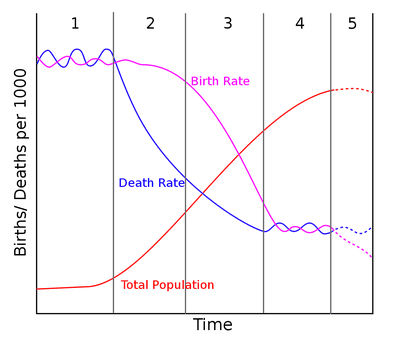 The theory of demographic transition theory is the latest attempt made to provide a historical analysis into the population problems of developing countries. It tends to explain the reasons why all developed countries several years ago went through three identical stages of population history.

Stage I: The pre-industrialisation stage

This stage is characterised by high birth rate accompanied by low death rate. This stage leads to high population as a result of a number of factors such as industrialisation, urbanisation, better diet, higher income, improved medical services, etc. This stage marks the beginning of demographic transition. Many developing countries are currently at this stage of population growth.

This stage is characterised by a low birth rate and low death rate. In other words, there is a relatively stable population with an older and larger population. This stage is associated with developed countries.