Before we discuss the law of variable proportion or law of diminishing return, we wish to highlight (briefly explain) the following important terms:

It is a factor that does not vary or change (neither increase nor decrease) with output. In the short-run, the fixed factors always remain constant irrespective of level of (changes in) output.

In Economics, short run means the time or period when something, especially a factory, an institution (a firm), etc, is newly established.

Good examples of fixed factors are:

It is a factor that varies (changes) with output. As variable factor increases, output also increases, and. vice versa. Good examples of variable factors are: factory workers, number of casual labourer, raw materials, like flour and sugar in baking industry.

It is important to note that in the long run, all factors of production are termed as “variable factors” as all the factors can be changed – appreciably increased. For example:

Briefly, AP is output per factor input; that is, output per one person. In other words, AP is the total product divided by the units of variable factor (labour -a number of persons) employed: The second definition indicates the formula for calculating AP. Symbolically, it is expressed as follows:

The law of variable proportion is now briefly referred to as “Law of diminishing return”. The law states that:

At the beginning of the process of combining variable factor (people – farmers) with a fixed factor (a specific area of land like one acre), output increases. And this continues as more and more units of the variable factor (more people) are added to the fixed factor (one acre of land). But after sometime, the average, marginal and total output will start to decline (decrease).

It is important to note that the LVP (or law of return) embodies (contains) two laws; i.e. it is in two parts:

Law of increasing return: it operates when output is rising specifically when marginal product (MP) is rising,

Law of diminishing (decreasing) return: it operates when output is falling, specifically when MP starts to fall.

The following diagram shows the graphical illustration of both principles and laws. That is, it shows the two parts of law of variable proportion. 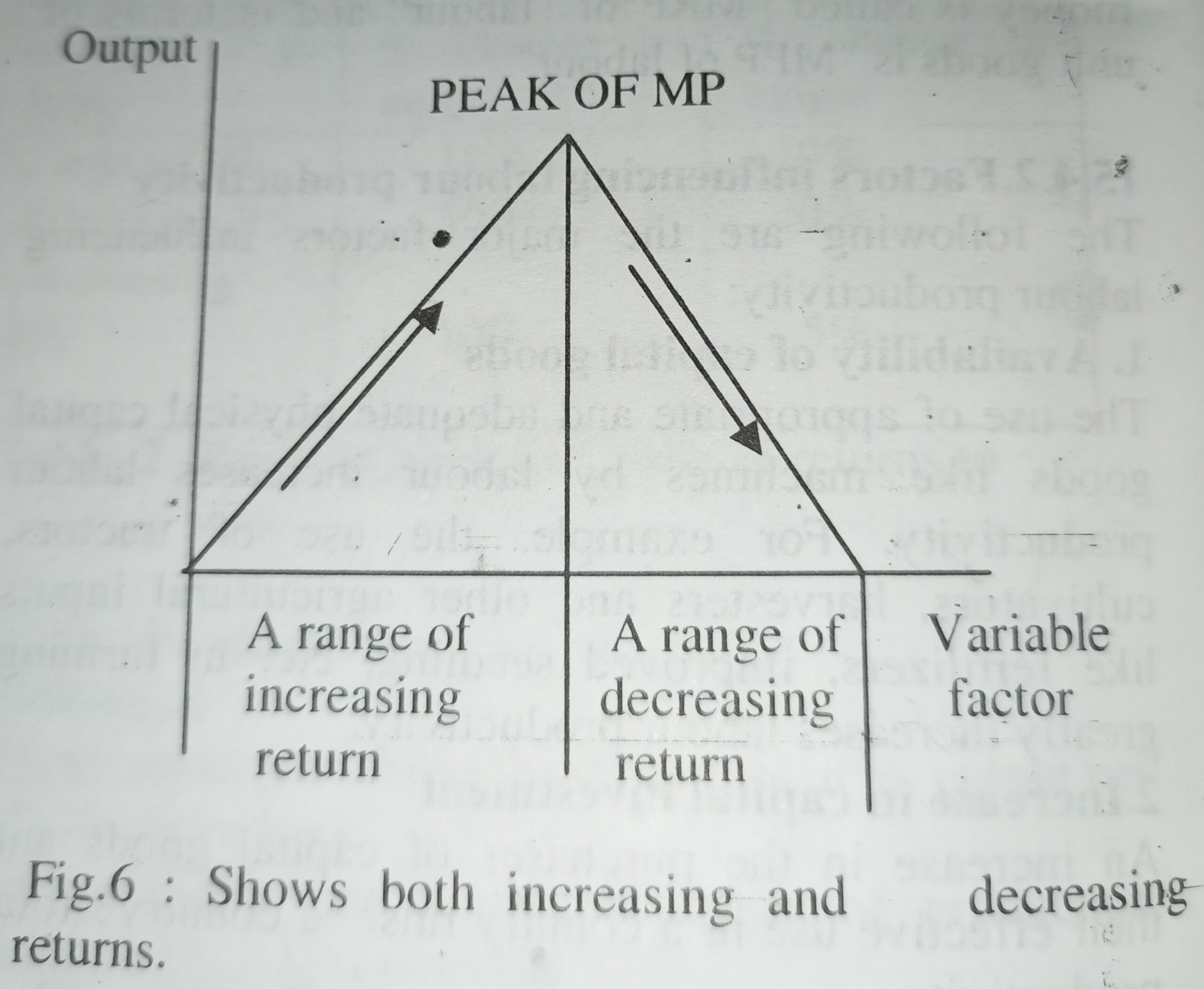 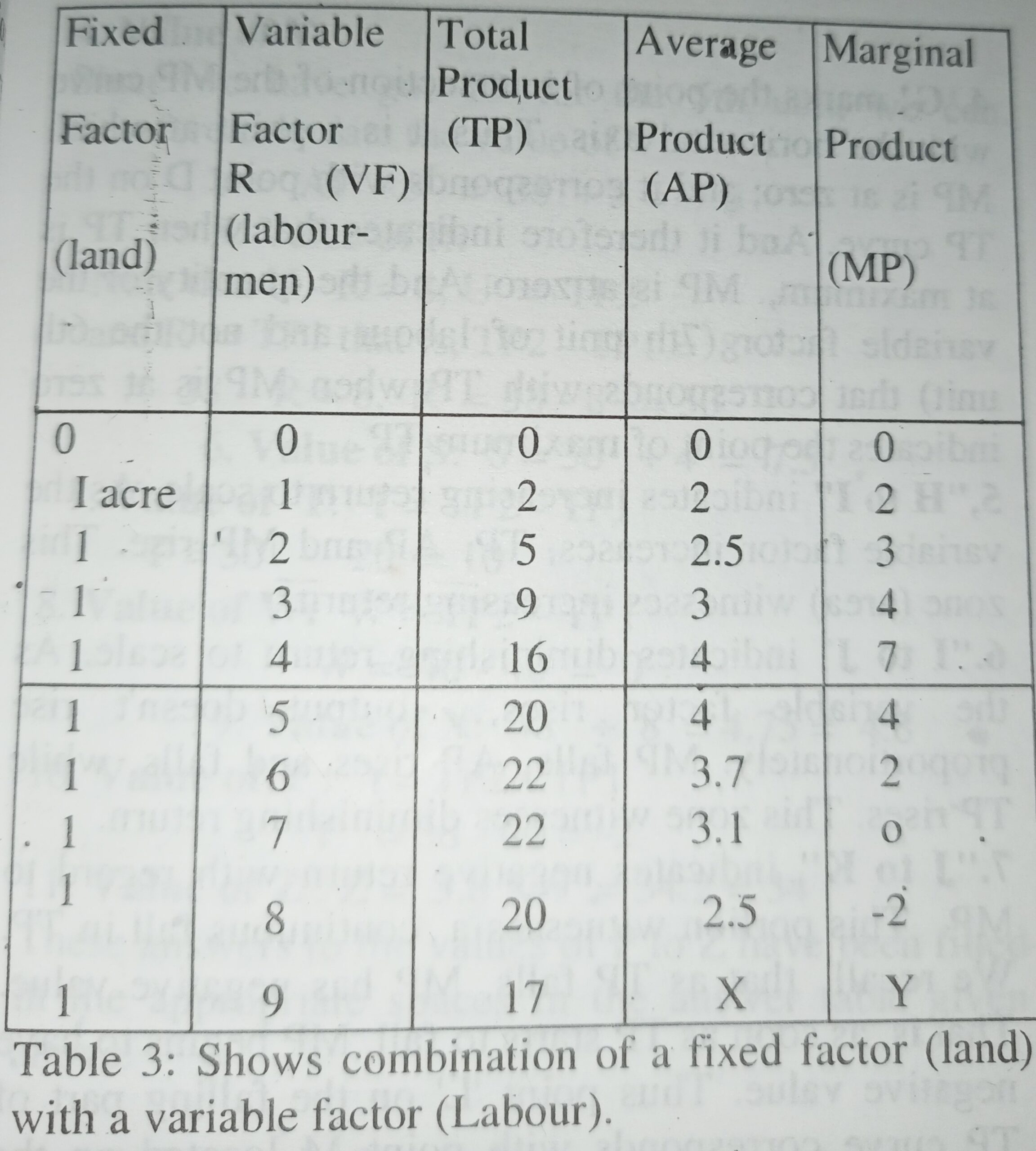 Determine the values of X and Y in table 3.

Let us apply the above given formulas to calculate the values of X and Y in the table. 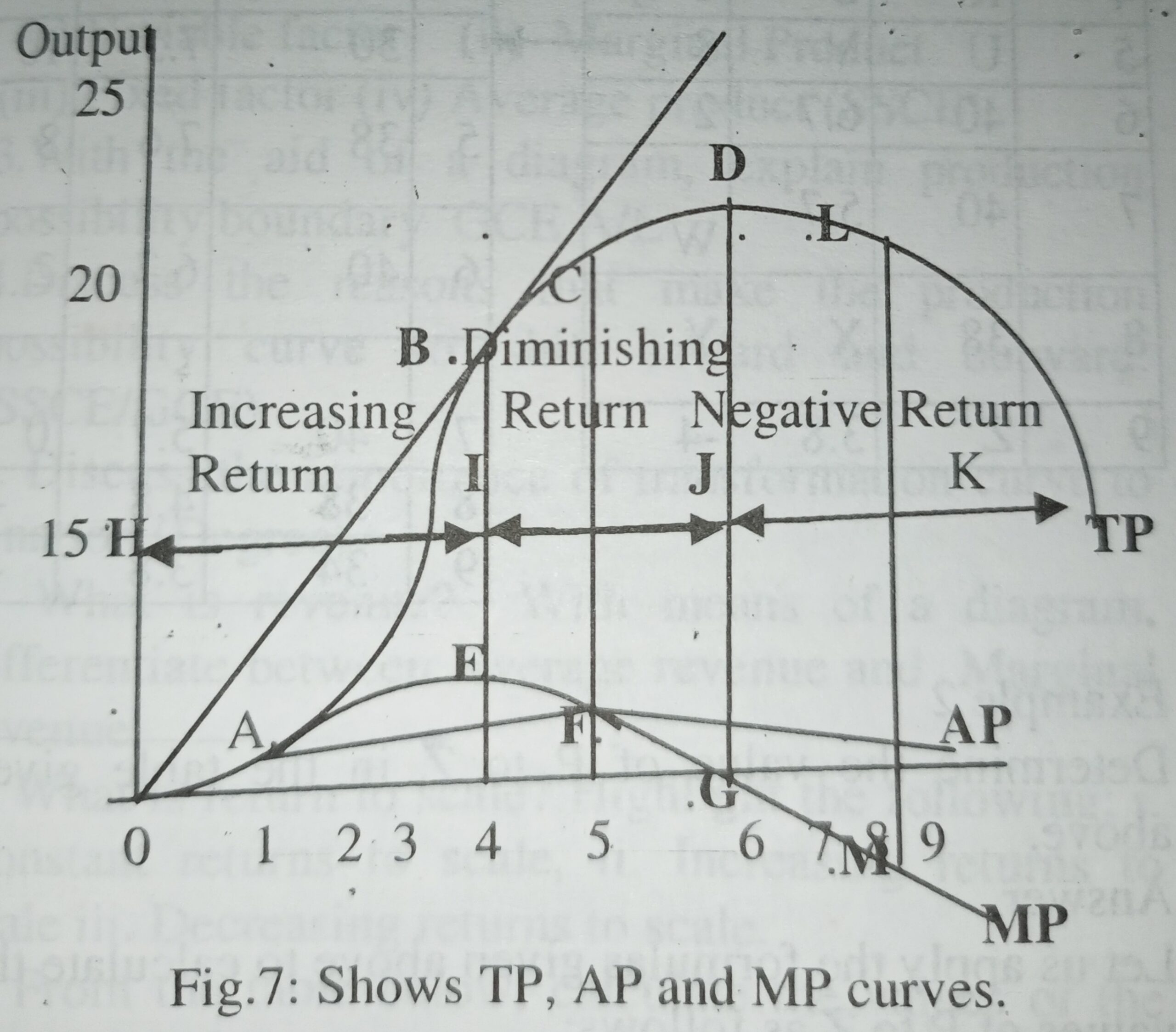 You should note that the point where MP is at maximum indicates the ‘end of increasing return’.

And such a point (point E in figure 7) is called

The quantity of variable factor that corresponds’ with it is called:

That is, OFC yields maximum output;, it yields the greatest number of goods that could be produced in a factory in a given period. Hence it always corresponds with the end of increasing return. It occurs at the point where MP is at the peak. And any increase in variable factor beyond such a point causes a decrease in output, Thus after this point the law of diminishing return normally sets in .

In the given example, table 3, OFC occurs at the 4th unit of labour. Thus the 5th person shouldn’t be employed as it makes MP to decline (fall). And note that it is not the point where TP or AP reaches maximum, like point D or F, that indicates OFC. OFC is solely determined or indicated by the peak of MP, point E in figure 7.

It employs additional worker (8th person) whose contribution is zero. That is, its employment does not add any thing (unit) to total output. TP remains the same; while AP declines to (57 ÷ 8) = 7.1 units.

It employs another person (9th person) whose contribution is negative (-2), and total output declines. This may occur because, probably, there is much congestion in the farmland or in the factory. And all the workers can’t work as effectively as before. This situation arises when diminishing return sets in.

We wish to summarize the above in a table, table 4, below. 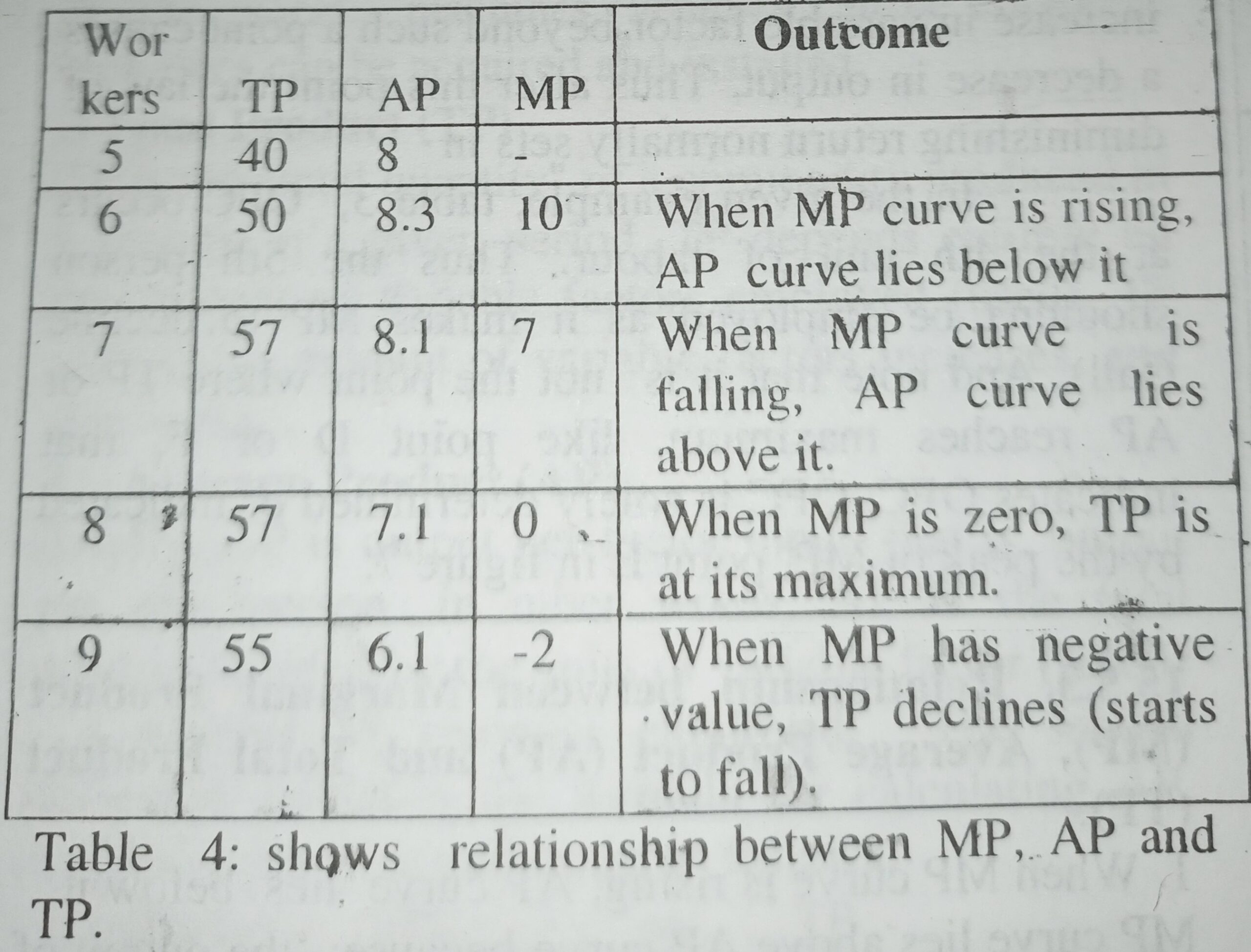 Interpretation of the various points in figure 7.

1) ‘E’ is the point of diminishing marginal return (or point of maximum MP). It corresponds with point B on the TP curve. This indicates that when MP is at peak, TP is still rising. Point E also indicates optimum factor combination which is 4 units of labour.

3) ‘A’ corresponds with one (1) unit of the variable factor. At this point or at one unit of variable factor, TP, AP and MP are all equal at 2 output (see table 3 given above).

7) “J to K” indicates negative return with regard to MP. This portion witnesses a continuous fall in TP. We recall that as TP falls, MP has negative value. That is, as soon as TP starts to fall, MP begins to have negative value. Thus point ‘L’ on the falling part of TP curve corresponds with point M located on the negative portion of MP curve. 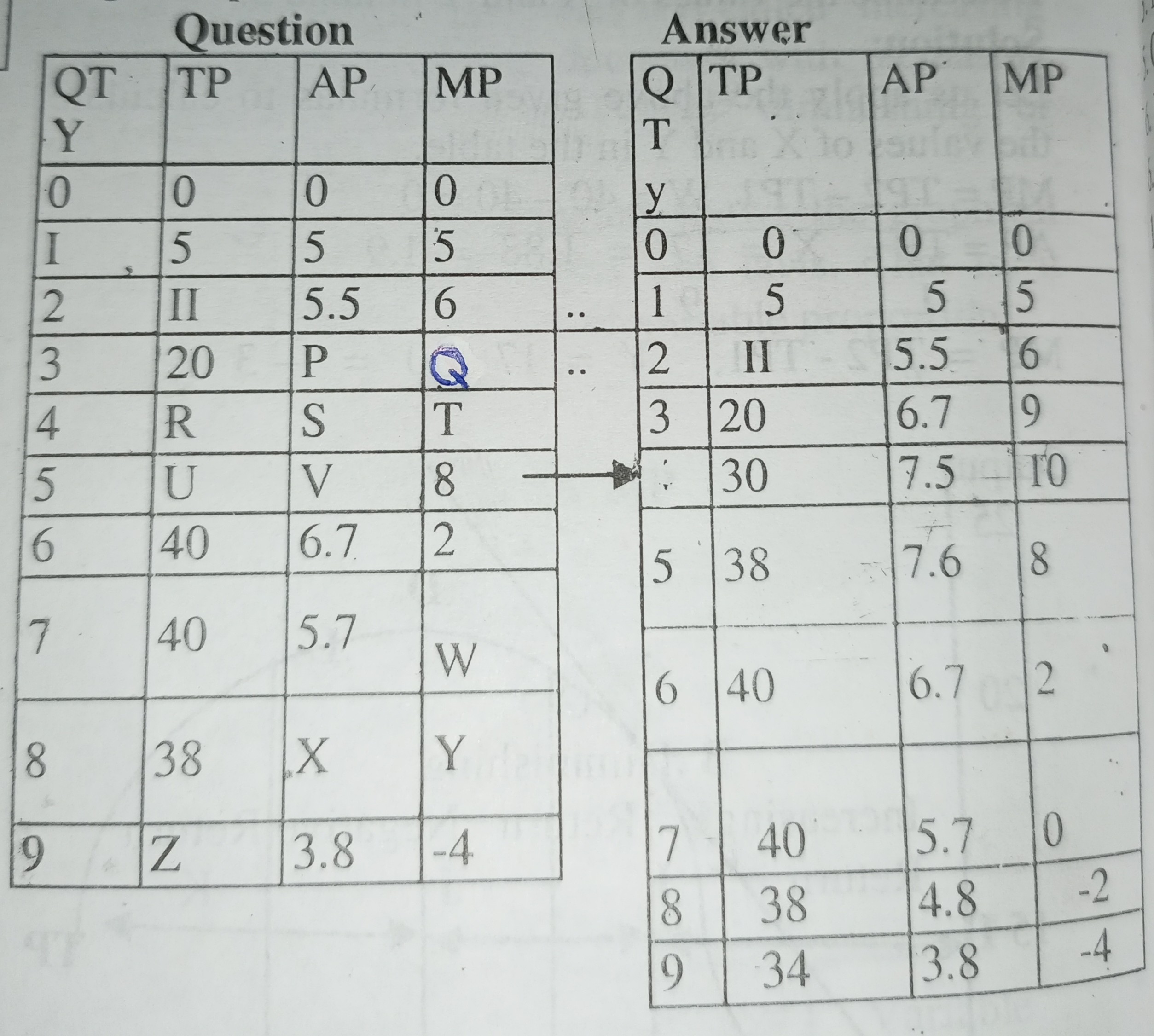 Determine the value of P to Z in the table given above.

Let us apply the formulas given above to calculate the values of P to Z as follows:

Since we have got TP for the 5th unit, we can therefore calculate the value of V

These answers to the values of P to Z have been filled in the appropriate spaces in the answer table given above.

Importance of law of diminishing returns