Index is a system that shows level of variable (item) especially price, cost, wages, etc so that they could be compared with previous date.

It involves the following preliminary stages:-

It is a device designed to measure average changes in the retail prices of goods and services which most people buy.

We wish to illustrate with how retail price index is compiled. Firstly, we chose 2010 as the base date. Secondly, we select low-income group. Lastly, after a thorough study of the expenditure pattern of the group we attach appropriate weights to the goods and services selected. The list of items and their prices on table 1 given below are those we selected in 2010 for the compilation of the retail price index. 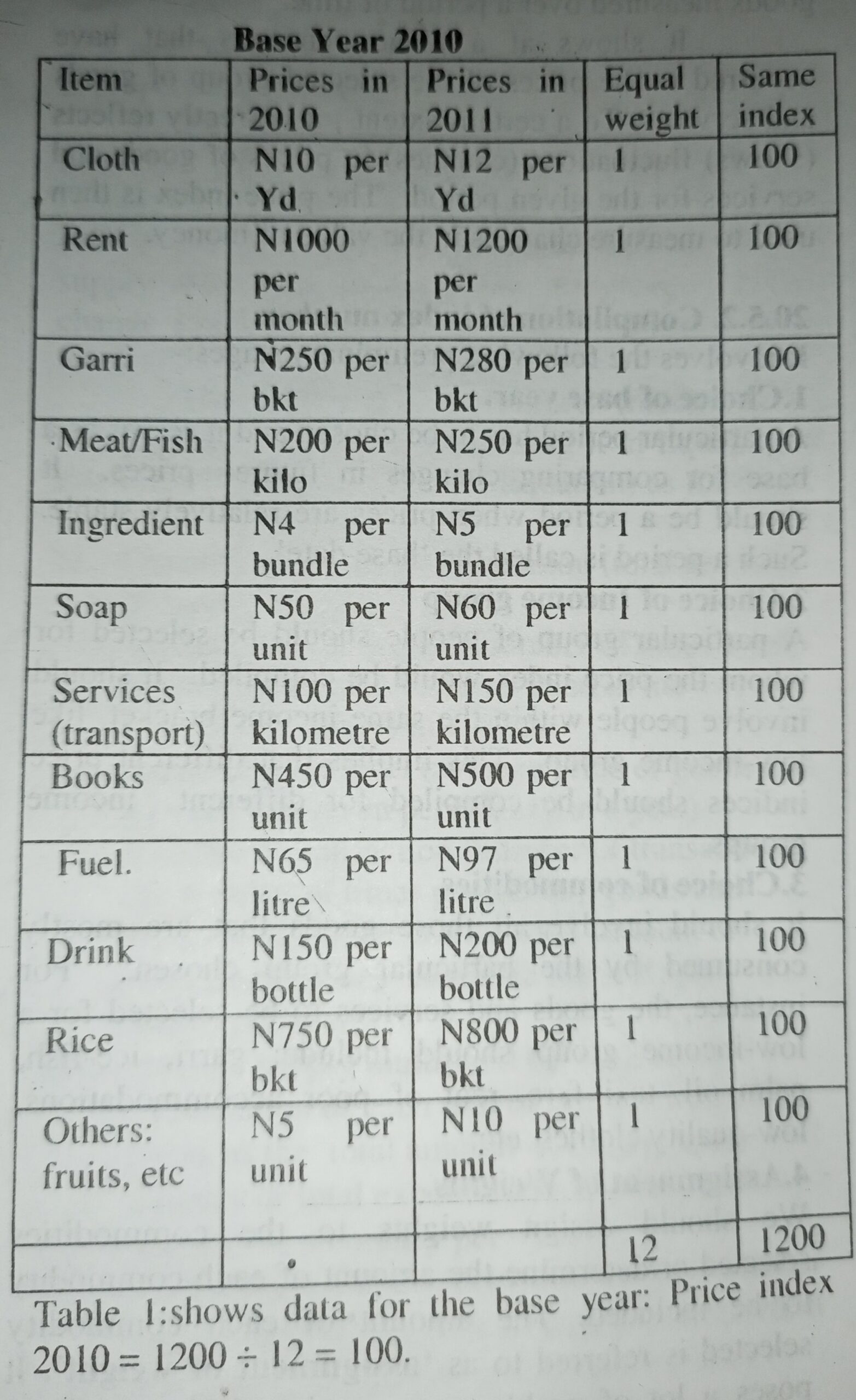 We should represent the price of each item at the base date, 2010, by 100 as shown above. And price in the subsequent period, 2011, should be calculated by altering 100 in the ratio at which the prices have changed. For example, in 2010, the price of cloth per yard rose from N10 to N12. This is 20% increase. If its price were 100 in the base date – 2010, in 2011 its relative price would be 120. Alternatively, the relative price can be calculated by placing the new price upon the previous one and multiplied by 100: 120/100 x 100 equal 120. The relative prices for the remaining items were similarly calculated.

The next column shows the weights we assigned to the items selected. They are determined by their importance or the amount of income expended on the item. For instance, garri has the highest weight because majority of low-income earners spend their income on foodstuffs, especially on garri followed by meat/fish, yam, etc. We have assigned the lowest weight to drink because poor people or low-income earners spend insignificant proportion of their income on drink. 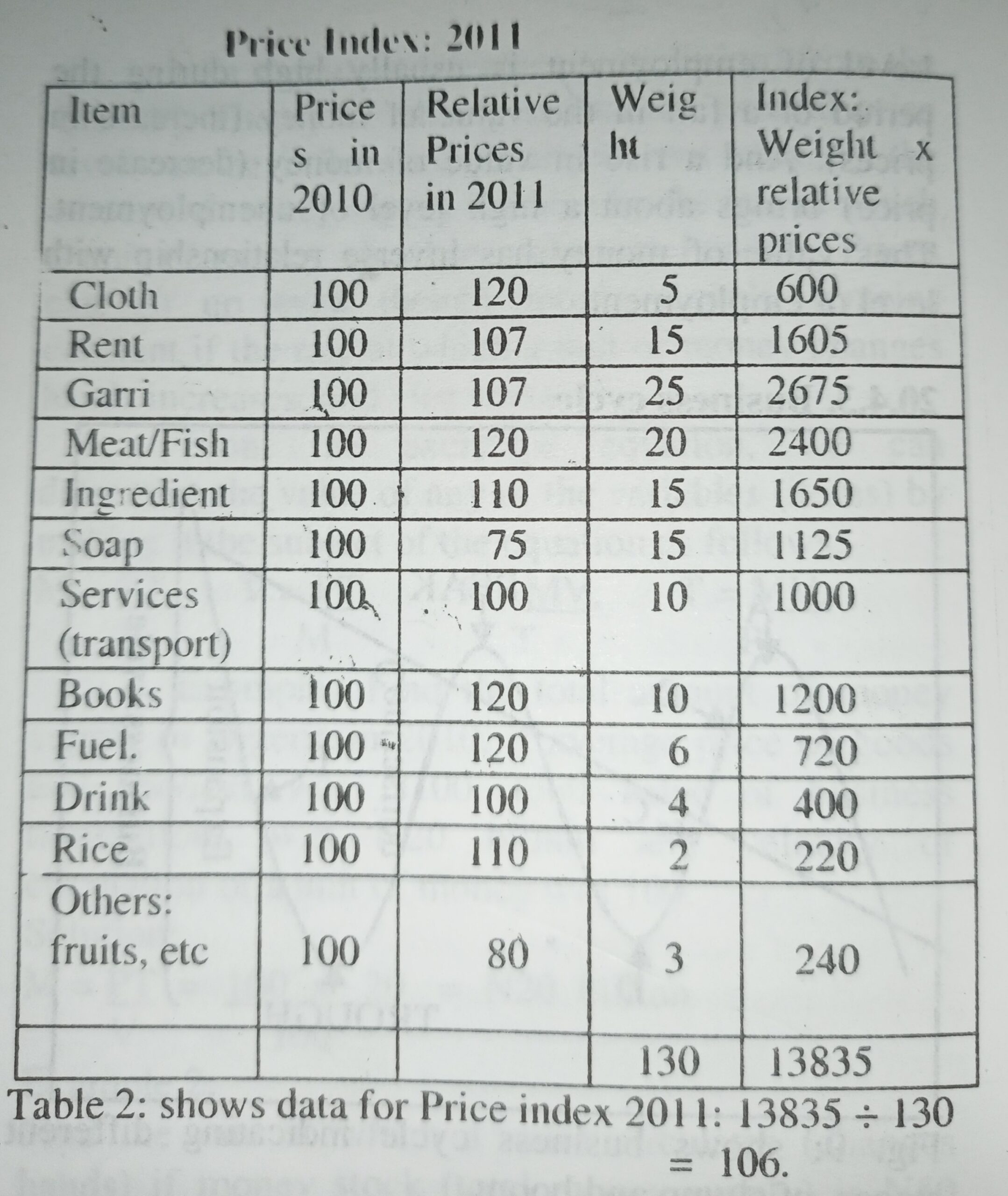 The last column shows the index of each item. They were arrived at by multiplying the weights by their relative prices in 2011. For example, the index of cloth in 2011 is calculated by multiplying 120 by its weight of 5 which equals 600. The indices of remaining items were similarly calculated.

We added the figures under the last column to get the index for all items which is 13.835. We divided it by the total of weights of 130 to get the price index for 2011 as 106. It shows an increase of 6% over the base year. It clearly indicates that price of goods and services mostly acquired by low-income people rose by 6% in 2011. And it implies that the value of money has fallen by 6% in 2011.

You should adopt (apply, use) the formula given above.

It is a system in which money is used as a medium of exchange in business transactions. It is synonymous with the price system in which all goods and services have prices. Thus it is a characteristic of monetized economy . .

MA consist of three institutions: they are

The first two institutions (CBN and Treasury) are created and firmly controlled by the third institution the Federal government. That is, CBN (central bank of Nigeria) and Treasury are government’s agencies or departments. Federal Government formulates (makes) monetary policies for their implementation. They ensure that all government’s directives (rules and regulations) concerning the monetary system – money supply and banking sector are properly carried out.

They are financial assets or interest bearing (earning) assets which can easily be converted into cash, but they are not termed as mediums of exchange (money). Liquid assets include: securities – equities (shares and stocks), treasury bills, bonds, time deposits (money deposited in banks especially saving and current accounts), etc.

They are financial instruments that can easily be converted into cash. They are also referred to as ‘near money’. They are in form of liquid assets.

It is a form of money that is legally recognized (duly authorized by the federal government) as a medium of exchange in a country Thus it MUST be accepted in exchange of (payment for) goods and services and settlement of debts. The objection to settlement of debt in currency notes or in any amount of currency notes causes nullification (cancellation) of the debt provided they are not counterfeit ..

‘Unlimited legal tender‘ means that any amount (even an infinite quantity) can be used in settlement of debt. While ‘Limited legal tender’ means that the quantity of coins that can be used in payment for goods or settlement of debts is restricted to a certain amount. After the specified quantity, a seller or a creditor has legal right to reject them – the coins. It is important to note, however, that the maximum quantity of coins required by law for payment is not openly expressed in many countries.