Christianity and Islam have a common origin. Both religions trace their origins to the same ancestor: Abraham. Abraham had two sons, Ishmael and Isaac. While the Muslims trace their descent from Ishmael, the Christians trace theirs from Isaac.

When Abraham married Sarah they had no child because Sarah was barren and could not bear children. When both of them had grown old, Sarah gave her Egyptian maid, Hagar to Abraham so that he might sleep with her and get a child. This was because the custom at that time allowed a barren wife to do such a thing. Abraham had a child with Hagar and called him: ‘Ishmael’. The descendants of Ishmael are the ‘Arabs’. From the Arabs, God called Muhammad to be His prophet, and this led to the founding of: ‘Islam’

Sometime after the birth of Ishmael, God made a covenant or agreement with Abraham. God promised to give the land of Canaan to him and his descendants for an everlasting possession. God promised Abraham that He would open the womb of Sarah and she will bear a child. The child will be called: ‘Isaac’. Within a year of this promise, Isaac was born. God had kept covenant faith with Abraham by giving him a son. Therefore, Isaac was the child of: ‘The promise,’ while Ishmael remained the child of a slave (maid) girl. In those days, a maid was a slave.

Isaac gave birth to a set of twins, Esau and Jacob. Later, God changed the name of Jacob to: ‘Israel’. Israel had twelve sons. From the twelve sons and their descendants came the twelve tribes that formed the nation of Israel. Out of the tribe of Judah, God chose the Virgin Mary to be the mother of our Lord and Saviour, Jesus Christ. God sent angel Gabriel to the Virgin Mary to tell her that she would give birth to Jesus Christ, the Son of God, who founded: ‘Christianity’.

The founding of our two religions

The founding of Christianity: When Jesus was about thirty years old he came to the River Jordan and was baptized by John the Baptist. God then baptized him with the Holy Spirit and called him: ‘His Son’. After fasting for forty days and nights in the wilderness to prepare himself for his ministry, Jesus began to preach the gospel message. He called on mankind to repent and enter the kingdom of God. Many people followed him. From among them, he chose twelve disciples who would continue with his work when he was gone. He founded the Church and appointed Peter as its first leader. After the death, resurrection and ascension of Jesus, the disciples continued with his work; and converted many people to the faith after the baptism with the Holy Spirit on the day of Pentecost. The followers of Jesus Christ were called ‘Christians‘, and the religion: ‘Christianity’.

As Christians, our holy book is the: ‘Holy Bible‘. It contains the story of the creation of the world, and the word of salvation which God spoke from the time of Adam and Eve, Noah, Abraham, Moses, the prophets of Israel to Jesus Christ and the apostles.

The founding of Islam: About 600 years after Jesus Christ had founded Christianity, an Arab family in Mecca in Saudi Arabia, Abdullah and Amina gave birth to a baby boy. He was called: ‘Muhammad’. When he was twenty-five, he married a wealthy Arabian woman called: Khadijah.

When Mohammed was about thirty years old, he used to retire to a cave called Hira. There he meditated about life. One day, while Mohammed was meditating in the cave, God sent angel Gabriel to him and commanded him to recite the word of God: In the name of the Lord who created everything. Angel Gabriel continued to visit Mohammed in the cave and gave him more messages to recite. The messages were collected to form the: Holy Qur’an, the Holy book in Islam, which is the religion Mohammed founded. The followers of Mohammed are called: ‘Muslims‘.

The creation of the world: Both Christians and Muslims believe that God is the creator and controller of the world and everything in it. He is Omnipotent (all powerful); Omniscient (all wise); and Omnipresent (present everywhere). He is Compassionate (kind, loving and merciful), King and the Judge of man’s character.

God created the first human beings, Adam and Eve, and put them in the Garden of Eden. God gave them the command to eat of all the fruits of the Garden of Eden except the fruits of the tree of knowledge of good and evil. God warned them that the day they disobeyed Him, they will die. At first they were very obedient, and therefore, had good relationship and fellowship with God.

The separation between God and man: The separation between God and humankind came when Adam and Eve disobeyed God’s command. The devil came and used the spirit of rebellion to poison their minds. He told them they will not die. Therefore they rebelled against God’s command and ate the forbidden fruit. The rebellion of Adam and Eve broke the good relationship that had existed between them and God, and separated them. As punishment for their sin, God drove them out of the Garden, where they had been living in comfort.

Reconciliation with God: Mankind has to seek forgiveness from God so that the broken relationship could be mended or the good relationship restored. According to Muslim belief, the moment Adam and Eve sinned, they confessed, and God forgave them.

However, Christians believe that God delayed His forgiveness because the sin of Adam and Eve affected the whole of mankind. Therefore, God’s forgiveness must cover the whole of mankind. God provided the means of reconciliation when He sent Jesus Christ to make atonement for our sins so that we might be forgiven and be reconciled with God once again.

The teachings of Jesus with regard to reconciliation with God and how to maintain the good relationship so that we can go to heaven after we die are found in the: New Testament. The teachings of the Prophet Mohammed on how to maintain good relationship with God and go to heaven after Muslims die are found in the Holy Qur’an and the Hadith (Traditions about Prophet Mohammed). 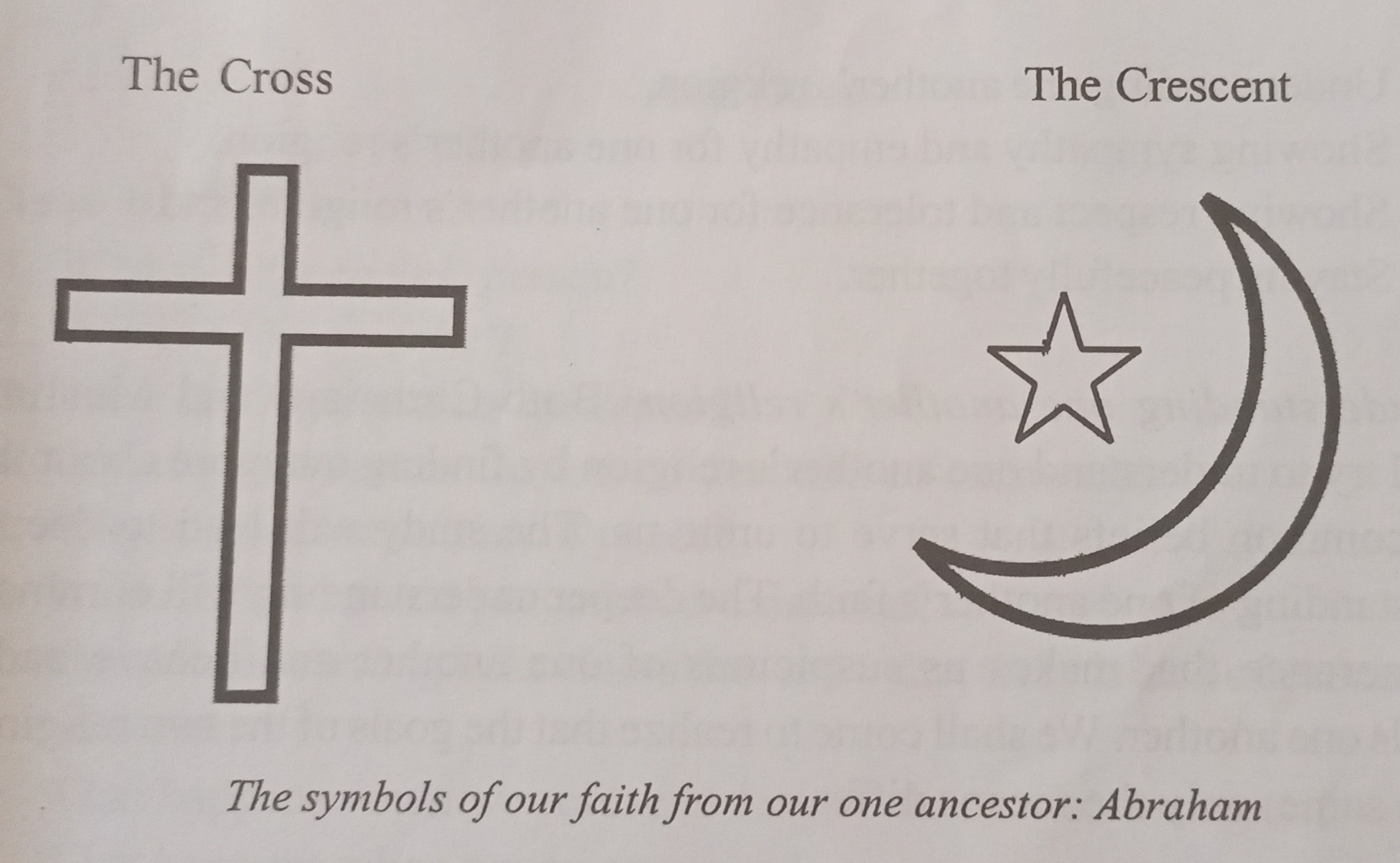 Towards peaceful co-existence between Christians and Muslims: We Christians and Muslims are united by our common belief in God, the separation between God and man, and reconciliation with Him. There are differences in some of the beliefs and the way we worship God. But we must not allow the differences to separate us. We should all work towards peaceful co-existence. This can be achieved by:

As Christians we live with different people in our community who are not of our tribe or our faith. Some of us have tried to live peacefully with others, but it has not been easy to promote peaceful co-existence. We find it difficult not to quarrel with them or fight them. We have problem exercising patience, forbearance and understanding. There is little tolerance, love and friendship between us and them. We know we are not promoting peaceful co-existence.

Therefore, you must call upon Jesus to help you promote peaceful coexistence by exercising patience, forbearance and understanding in your neighbourhood so that Nigeria, our great country will continue to remain strong, great, united and prosperous.

God wants Christians and Muslims to work towards peaceful co-existence

Christians and Muslims have been fighting one another for a long time in this country. Peaceful co-existence between one another has been very difficult to achieve. Part of the reason is that we are all ignorant of one another’s religion. We do not know that both religions (Islam and Christianity) have the same, ancestor: Abraham. We also do not know that there are three common beliefs that serve to unite and bind us together as Christians and Muslims. As a result of this ignorance, we say bad things about one another’s faith, and fight one another. All this is bad. We should put a stop to that now.

Now you know of the common origins of your faith (Abraham) and the three common beliefs that unite both of you. With this knowledge, God wants you to pray to Him through Jesus to help you show more understanding; sympathy and empathy; respect and tolerance for both Muslims and Christians; so that you can all work to achieve peaceful co-existence.

3) As Christians you should desire peaceful co-existence. Therefore, we should learn to pray to God through Jesus to help you to:

Save
Tags: and, christian, christianity, islam, of, origins, religious, studies, the