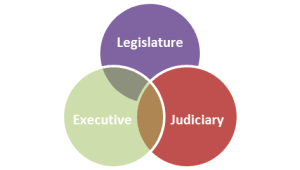 The Executive: This is the organ of government that implements laws and policies in the state for the smooth running of the state. The executive implement laws passed by the legislature and help to administer the affairs of the state properly.

The executive arm of government performs the following functions:

There are two types of legislature and they are:

FUNCTIONS OF THE LEGISLATURE

Structure of Courts in Nigeria

Independence of the Judiciary

Independence of the judiciary suggests a situation whereby judicial organ of the government is able to dispense justice without fear or favour. It also means ability to perform duties without being under the control or influence of any other arms of the government.

In all civilized countries of the world, judiciary must be independent because:

Problems of the Judiciary in Nigeria

The Nigeria Judicial system is facing the following problems;

Functions of the Judiciary