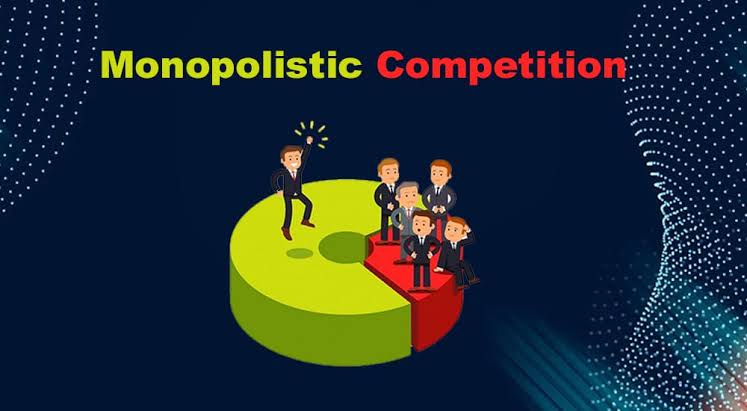 The following are some of the important conditions under which a monopolist operates.

Conditions under which all firms operates

Short-run equilibrium of a monopoly firm

A monopolist continues to produce as long as MR exceeds MC. Conversely, he reduces production output whenever MC exceeds MR as the surplus profit falls or losses are incurred. 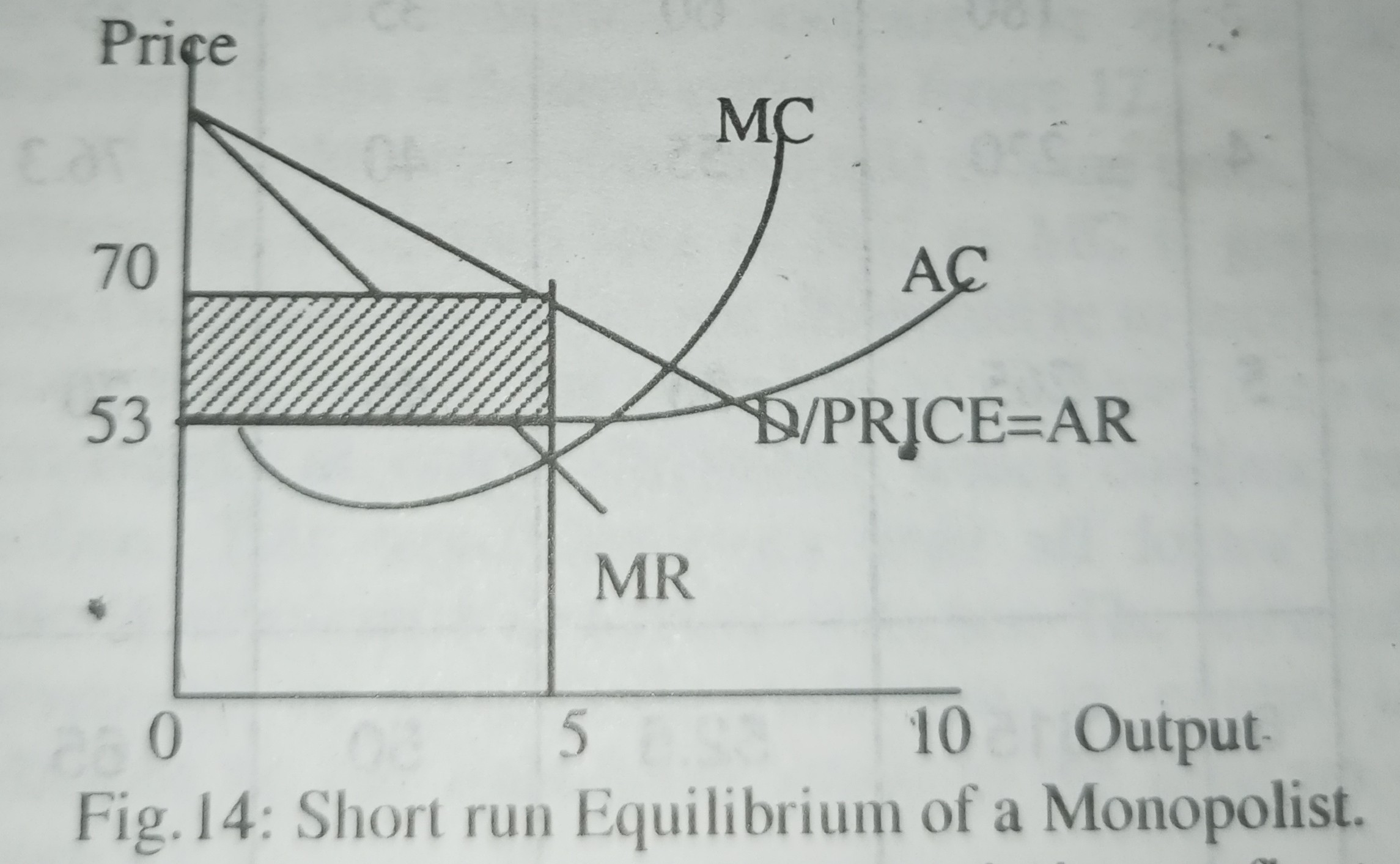 We recall that all firms maximize profit at the output where MR equals MC; the monopolist is not an exception. Thus all profit maximising monopolists increase production output towards this point. And an output slightly less than this level (where MR equals MC), profit is not at the peak or maximised. Also an output slightly more than this level. profit decreases. Therefore, the monopoly firm is in short-run equilibrium (reaps maximum profit) when it produces an output at which MR equals MC. And there is no tendency either to increase or decease output as any of such actions causes profit to decline.

From the above diagram, figure 14, the monopoly firm is in equilibrium when it produces and sells the fifth unit. At this output, the price is N70.00; and the cost of producing a unit is N53.00. The profit is the difference between the price and AC multiplied by the quantity produced and sold (five). Thus his profit is N85 (N17 times 5 units which is the shaded portion in figure 14. And it is not in equilibrium if it produces an output that is either less or more than five units as it realises less profit or the sustains losses. 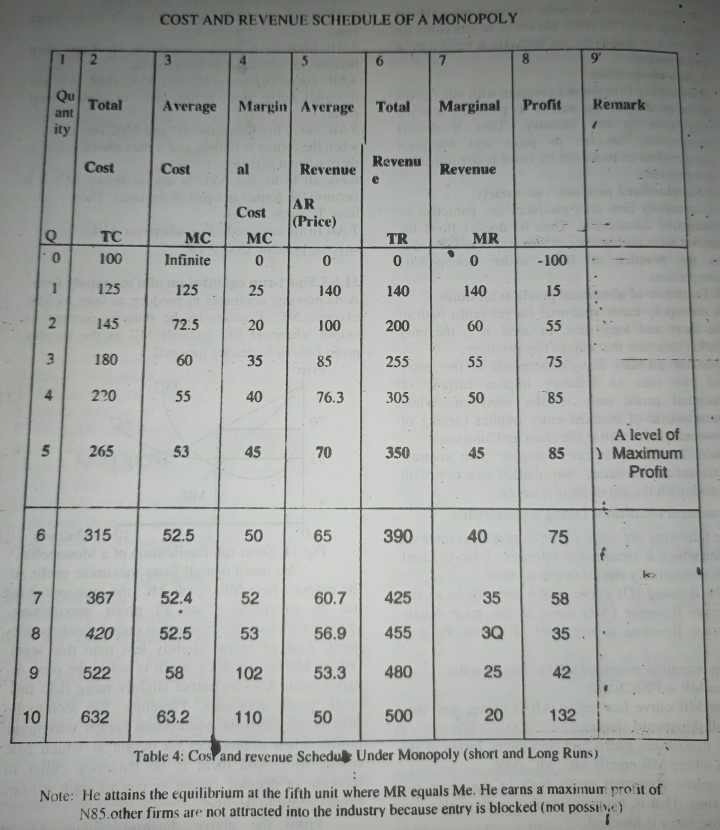 Students are advised to use alphabets (A, C, E, P. Q, O, etc.) during class work or examinations. For example, in figure 14 , the equilibrium price can be termed as OP, and the quantity as OQ. Therefore, the abnormal profit is equal to rectangle PIPEEI (OPEQ – OPIE1Q) as illustrated in figure 15. Monopolists earn abnormal profit in the long; it is because entry is almost entirely blocked. They earn abnormal profit at the point where MC = MR and price is greater than MC; MR = MC < Price. It is equal to the shaded portion of the diagram. At this level of output, either increase or decrease brings in less profit. This is their equilibrium position in the long run. This is illustrated in figure 16. 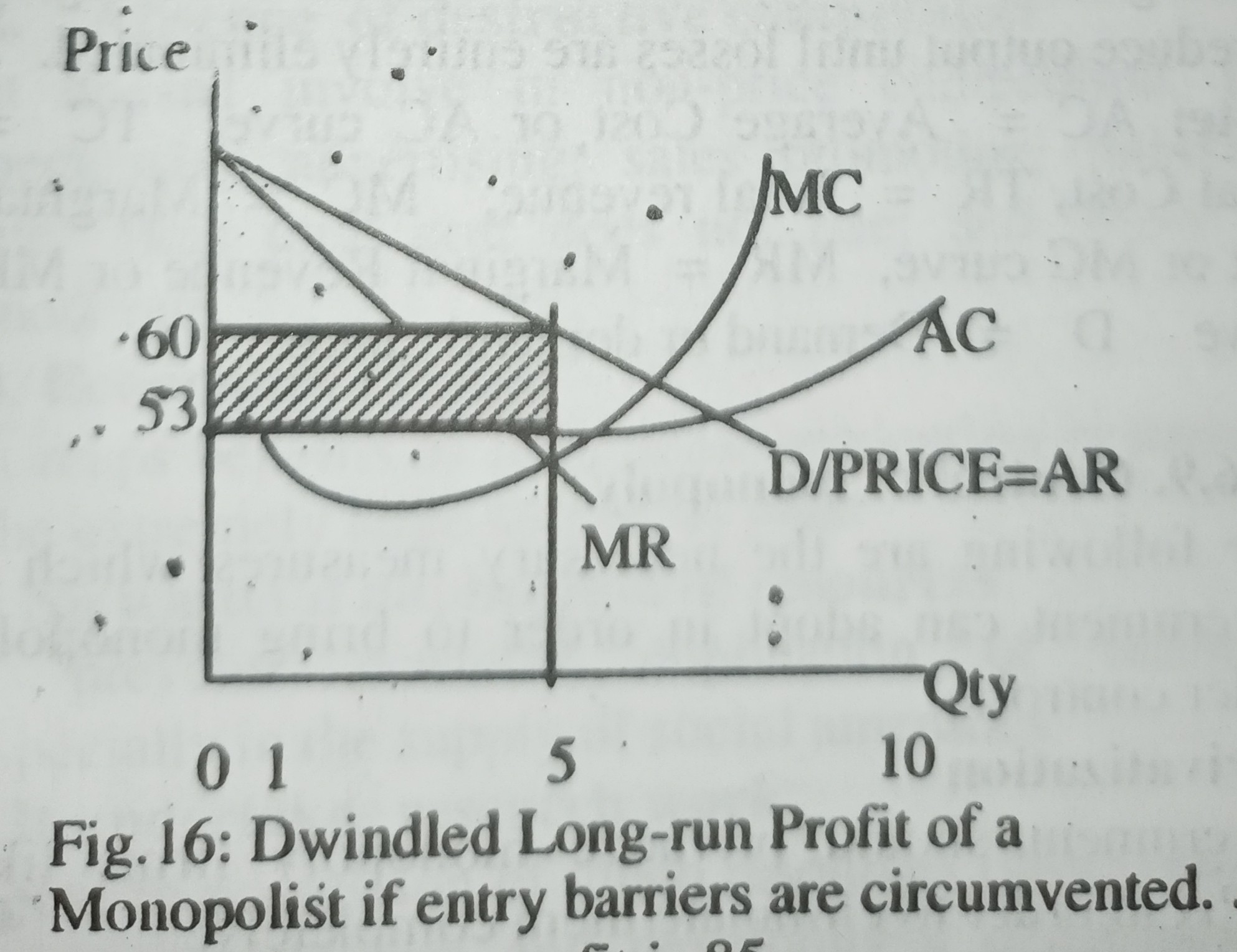 The monopolist’s equilibrium profit in both short and long runs are almost the same. It may be smaller or larger than in the short-run. However, it tends to decline in the long run because of:

Invention of similar or very competitive products by rivals – other firms.

Failure of the monopolist to adopt modern technique of production and organization in order to continuously improving the quality of his product and its effective distribution. These adversely affect his profit margin as illustrated  in figure 16. Nevertheless, pure profit still exists in the long run, all things being equal. 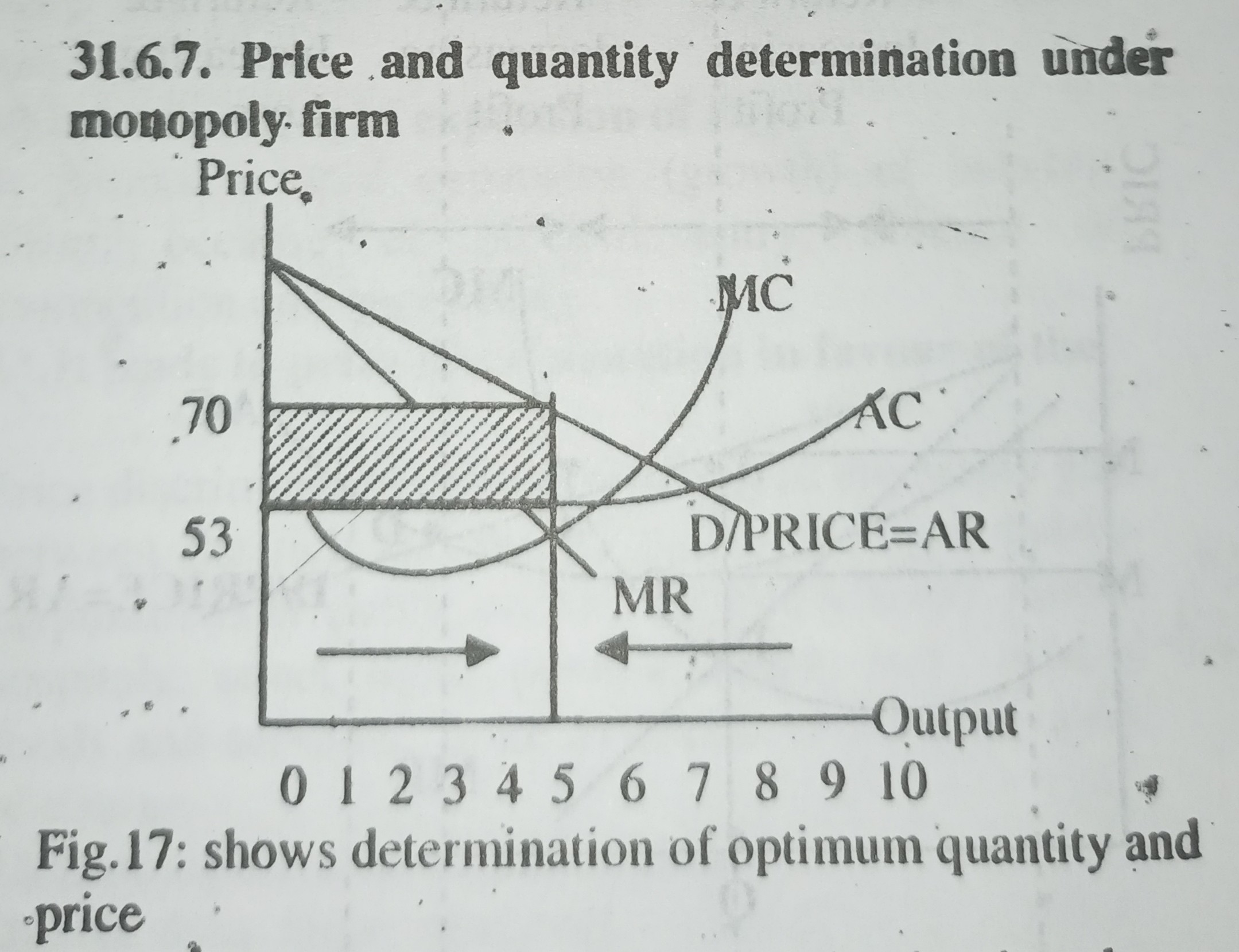 At the output of two units in the above figure 17, the firm realizes a profit of N55.00. You should also see table 2. And as it increases output to 3 units. 4 units etc, the abnormal profit increases. The abnormal profit reaches a maximum when it produces and sells five units.The rightward movement or continuous increase. in output is? indicated by the left-hand arrow in figure 17.

Upon the production and sale of nine units, the monopolist sustains a loss of N42 as MC is greater than the price. As losses are disincentive to increase production output, he decides to reduce output. Fortunately as output decreases, losses continue to decline. This trend continues until all losses are entirely eliminated and profit emerges. The leftward movement or continuous reduction in output is indicated by the right-hand arrow in the diagram .figure 17.

At the output of five units, MR equals MC; and the firm’s profit, which is N85, is at a maximum. Any output before or beyond five units does not maximize profit. Thus the most profitable output is five units; the price that corresponds to this point or level of output where MR equals MC, or the price N70, at which the five units are sold is the optimum price. Thus the optimum quantity is 5 units and equilibrium price is N70. 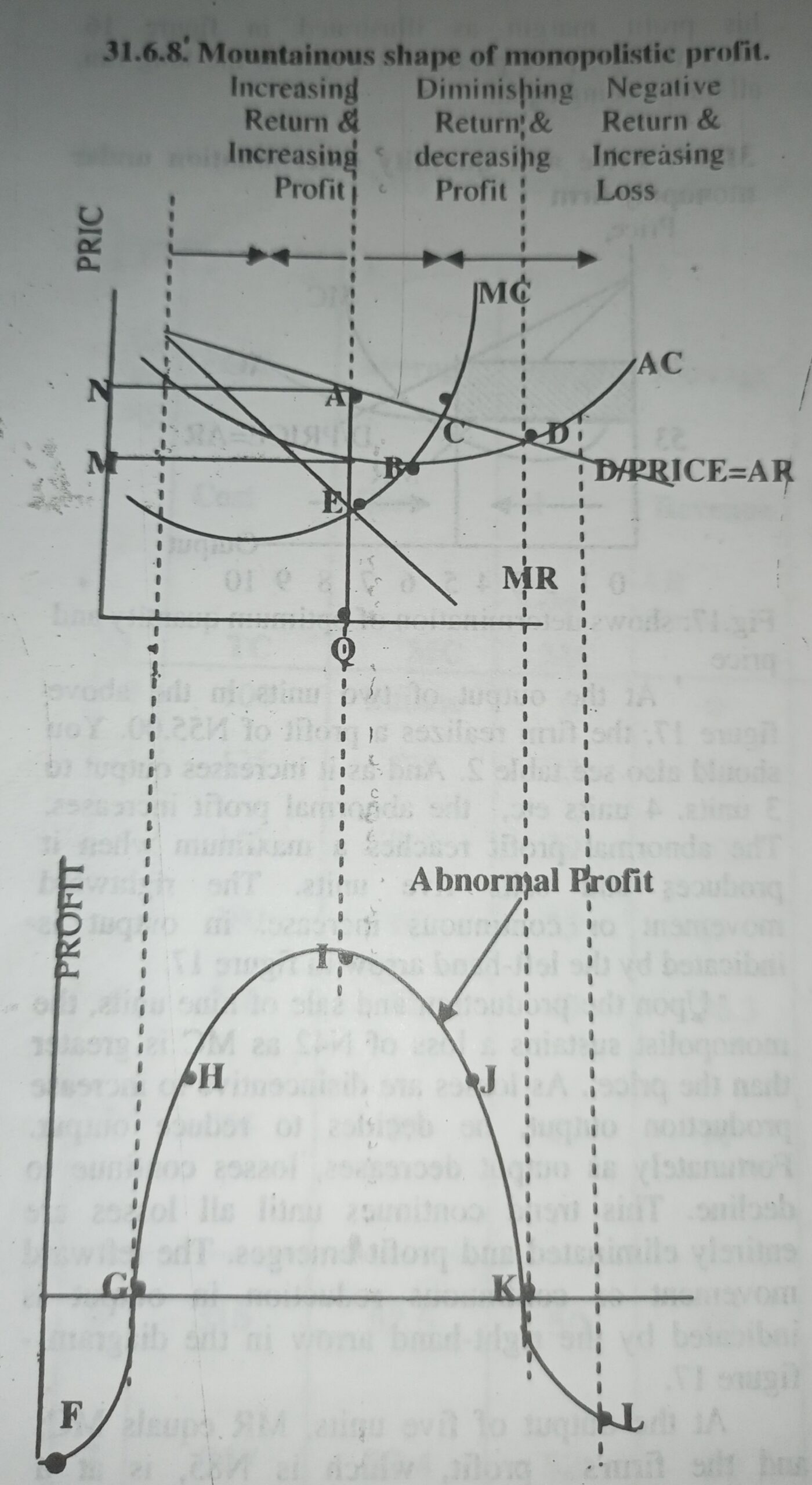 The minimum point of the AC curve: the point through which MC curve intersects the AC curve.

Point of intersection of AC and demand curve. When AC equals Price, there is a break even profit is zero.

Equilibrium point where MR = MC. The major determinant of equilibrium position of all types of market structure.

Initial break-even point: it is the break even point at the initial stage of production.

Level of decreasing profit; the law of diminishing (or decreasing) return operates at this level.

Ultimate (last) break-even point where AC = price after a very large output and diminishing return has long set in.

Zone of heavy losses as AC by far exceeds price (or TC is greater than TR). At this stage the firm ought to reduce output until losses are entirely eliminated.