“The sum of values of goods and services created in the economy gives the output calculated GDP.”

The output or value-added method does not calculate the values of goods at different stages of production. It rather estimates “the value each firm adds to a product” in the process of production. That is, we calculate the contribution of each firm to a product until it is finally produced. And the sum of value added by each firm until the product is finally produced gives the actual value of the final product.

The sum of values added by all firms to a product until it is finally produced is equal to its market (retail) price as shown in the examples and tables below. Thus the output method entails (involves) adding the prices of all goods produced and services rendered in a country in a given period. And the sum of the market values of all goods and services produced in a country per period gives the Gross Domestic Product (GDP).

Firm A (Mr. Paul) picks up an orange in a forest and conveys it to the town for sale at N10 to firm B. Firm B transforms it to orange juice which is sold to firm C at N22. Firm C converts it to Fanta sold at N35 to firm D (trader). Firm D preserves and transports it to a market where it is sold to a final consumer at N40.00. And for a thorough understanding of the topic, we wish to explain more on the role of each of the firms as follows.

Firm ‘A’: It does not buy anything like input or raw material from any body as it picks it up in the forest free of charge; that is, there is no cost of production.

(This example assumes that there is no transport cost).

The sum of values-added by the four firms (A – D) that are involved in the production of the fanta gives the final value of the product. This is further illustrated below:- 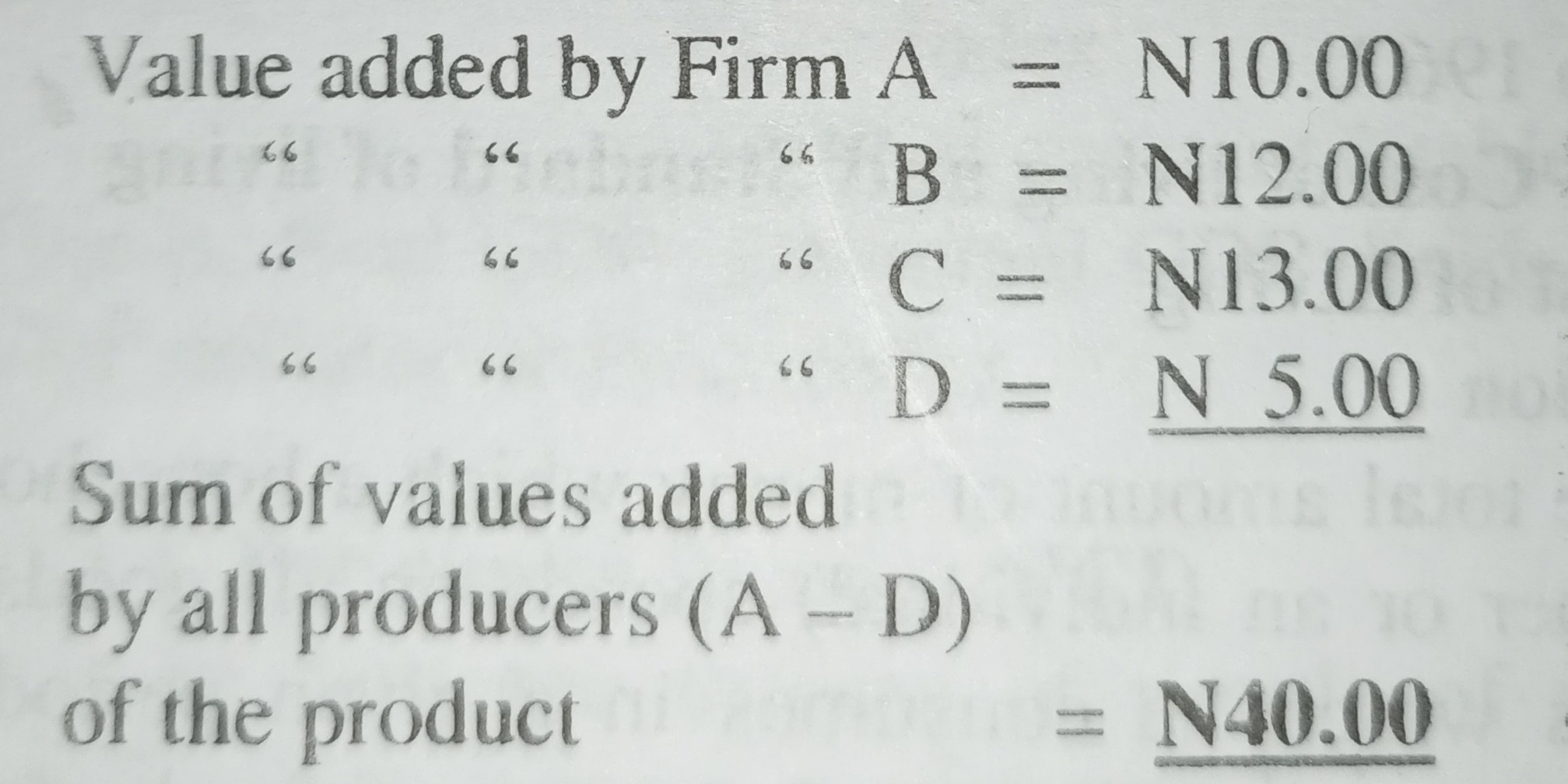 Thus the actual value of producing a bottle of Fanta is N40.00. The above output method of measuring National Income is clarified in a summary table below which is divided into two sections: Upper and Lower. 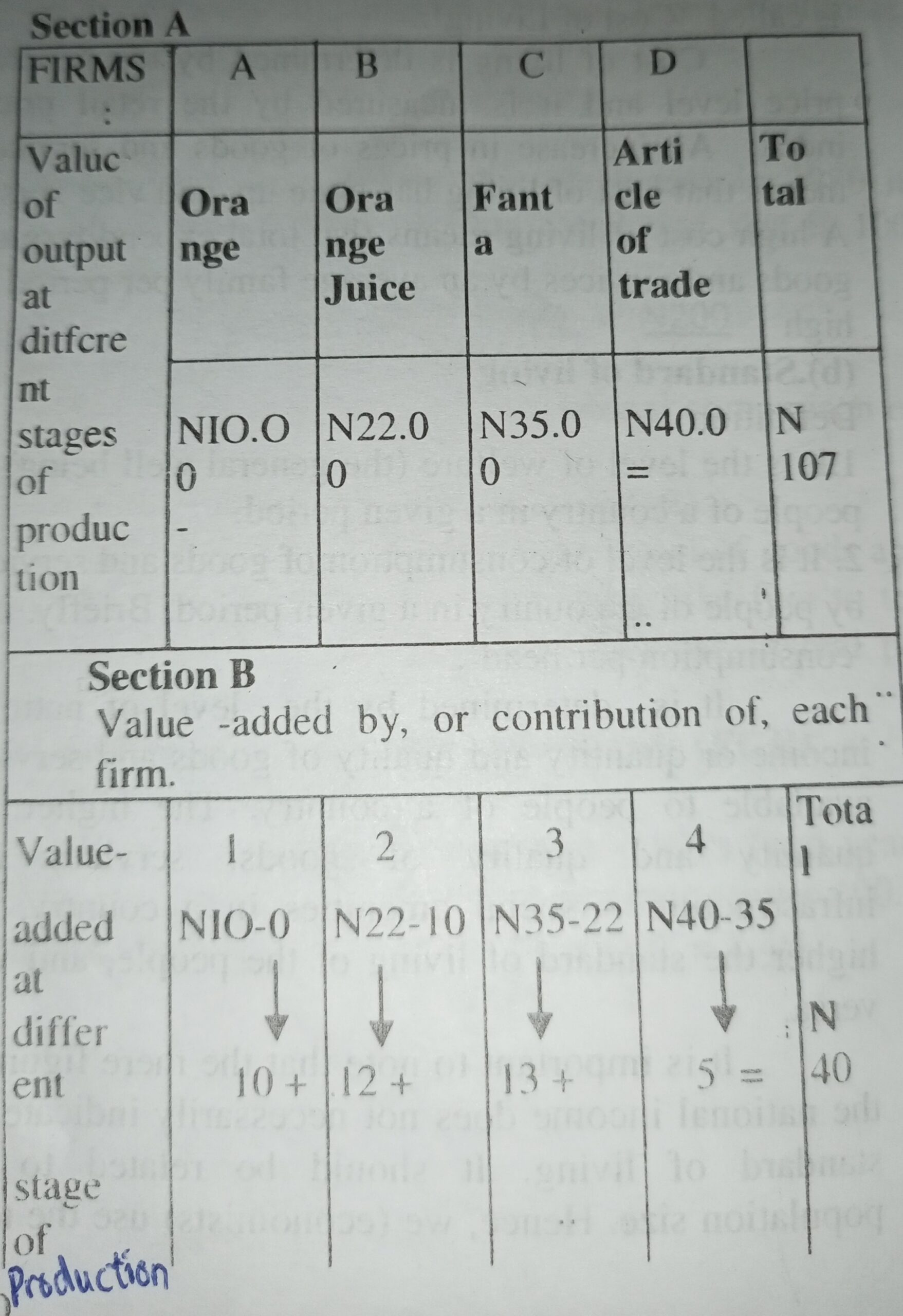 Table above shows calculation of values added to a product by different firms.

This section calculates value of goods by taking the total value of a product at different stages of production without deducting inputs from output to arrive at value added by each Firm. It takes the following steps: 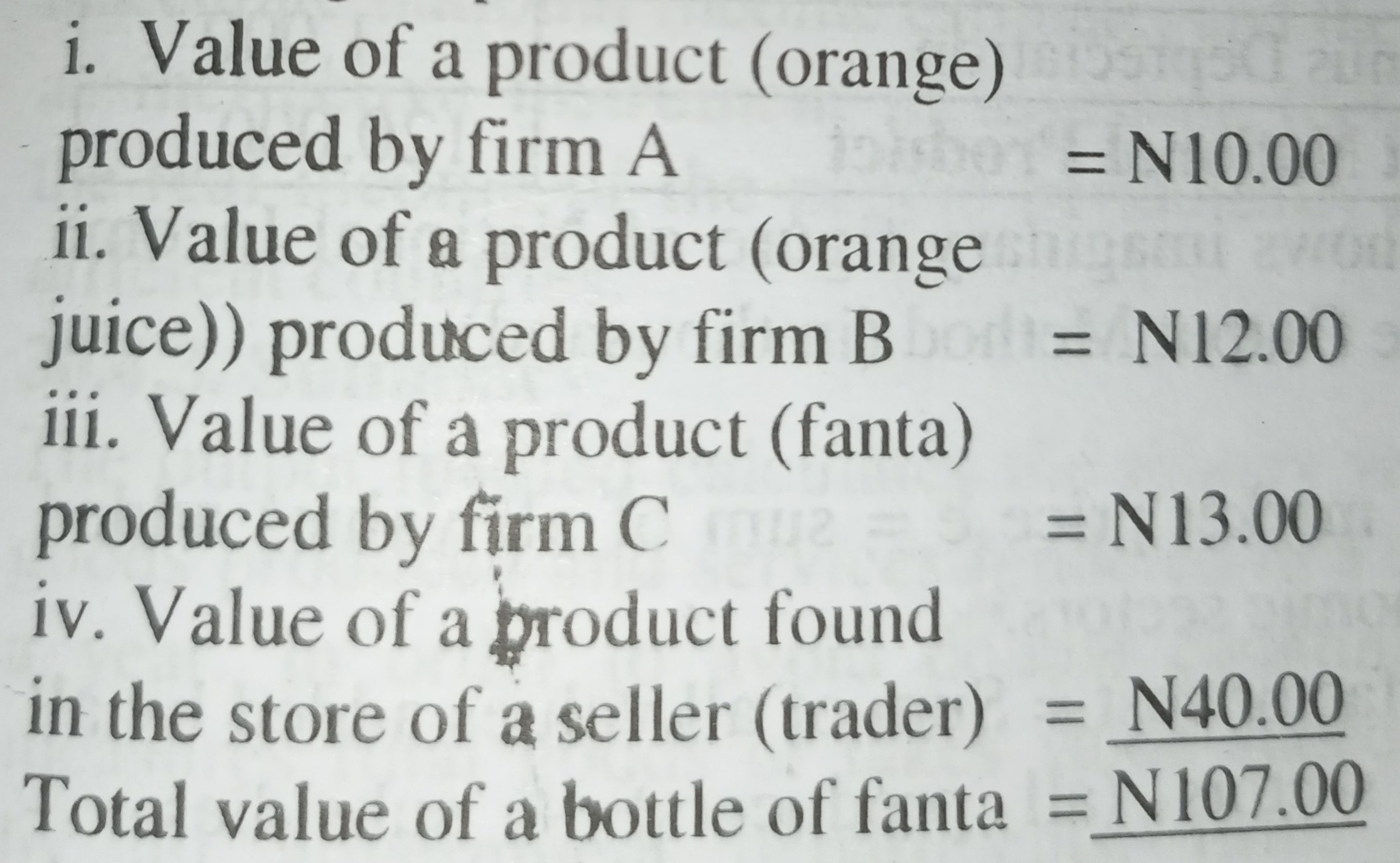 Therefore, the cost of producing a bottle of Fanta is N40.00 and not N107.00. This avoids double counting. Using this method in measuring all goods and services in a country shows a true reflection of the people’s efforts.

Whereas the Section A approach makes many items like raw materials or semi-finished products to be counted twice, even three times. It shows that the value of a bottle of fanta is N107.00. This leads to double counting; and the total value of goods and services produced in a country is grossly over estimated.

Lumber-jack (lumberman) cuts down a timber; and he cuts it into logs. He conveys them to the town; and he sells them to a sawmill factory at N500.00. The sawmill saws them into planks which it sells to a carpenter at N750.00. The carpenter uses them to construct / chairs which he sells to a retailer at N1,200.00. The chairs are subsequently sold to a final consumer at N1,500.00.

Through the output (value-added) method, the chairs cost N1,500. If the values of the products were taken at different stages of production, the chairs should have cost N3950.00 which implies double counting.

You should note that the output method is in line with the definition of GDP given above. That is, we calculate value added of all government agencies, firms and individuals plus net income from abroad to obtain the Gross National Product. (GDP). These items and others to be added and subtracted are discussed in detail as follow.

Under the output method, the following are either added to or subtracted from the GDP in order to reflect (show) a genuine figure.

The machines bought today are very useful and more productive than those bought yesteryears. This is due to constant reduction in value of fixed assets. Such reduction in value which is simply referred to as ‘wear and tear’ of fixed capital goods like machines, vehicles, etc is called Capital consumption or depreciation. And the value of depreciation is always subtracted from the GDP to obtain the NNP. This ensures that the productive capacity of a nation’s stock of fixed capital goods is constantly maintained.

We should take into account property owned or investment made by Nigerians in other countries. We should also know the value of the property owned or investments made by foreigners in this country. They earn incomes. If the incomes realized from Nigerians’ investment in abroad is greater than those of foreigners in this country, we have surplus. And such surplus should-be added to the GDP.

In order to simplify the discussion, we assume that “Net Property Income from Abroad, abbreviated as ‘NPYA’ is always positive. That is, we always get some amount from abroad.

It is amount of money paid by an extra body, especially by government, as a part of cost of production of goods and services in order to reduce their cost and prices. And this makes their production and distribution to the public possible as they are very cheap.

Many governments often subsidize cost of production of public utilities, like pipe-borne water, electricity, petroleum products (petrol and kerosene), gas, educational (schools) and health care (hospital) services. This lowers their costs and prices. In order to reflect (show) the true cost of producing these goods and services, the amount of subsidy is always added to the GDP.

Table 7: shows summary of items to be either added or subtracted from the output method. 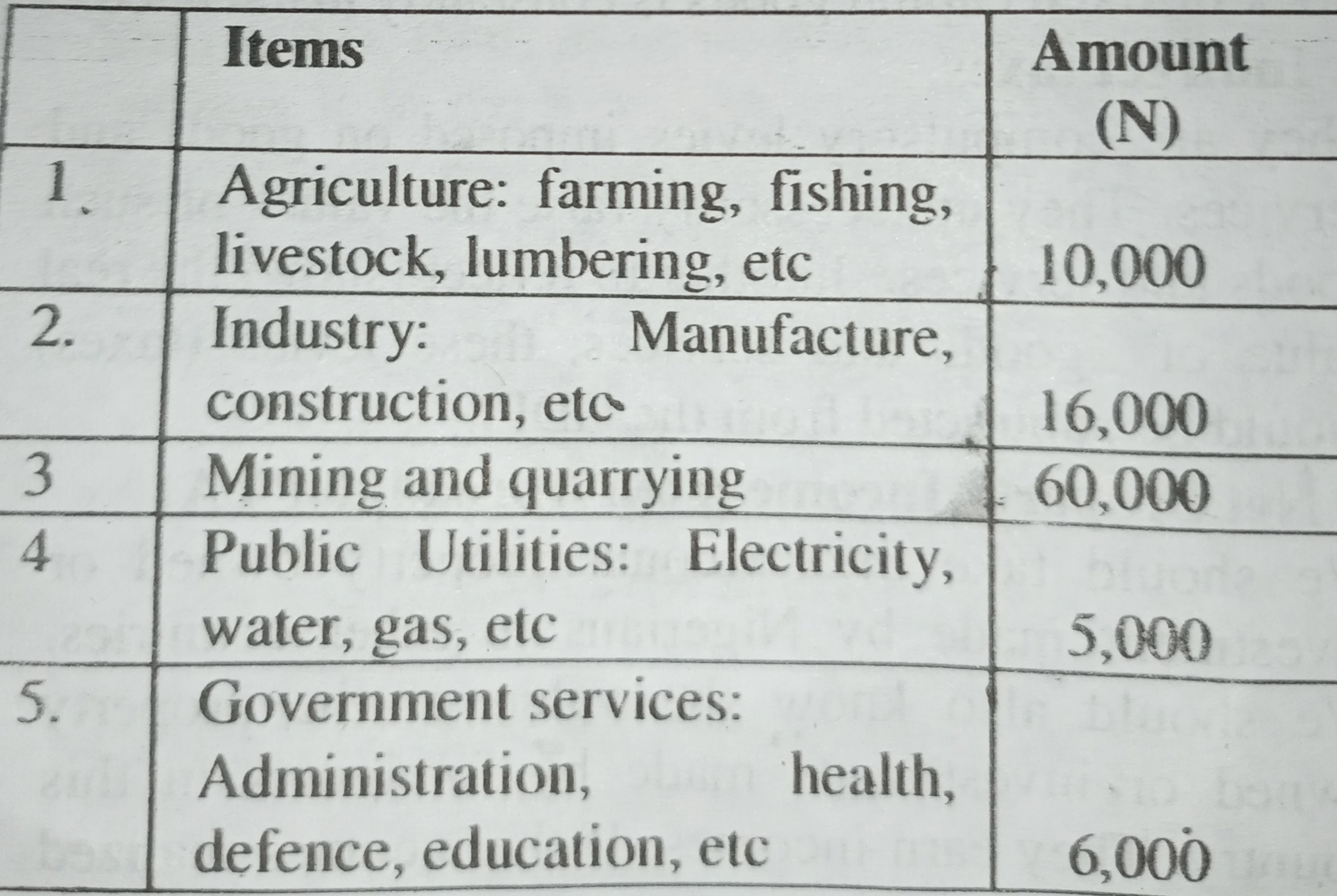 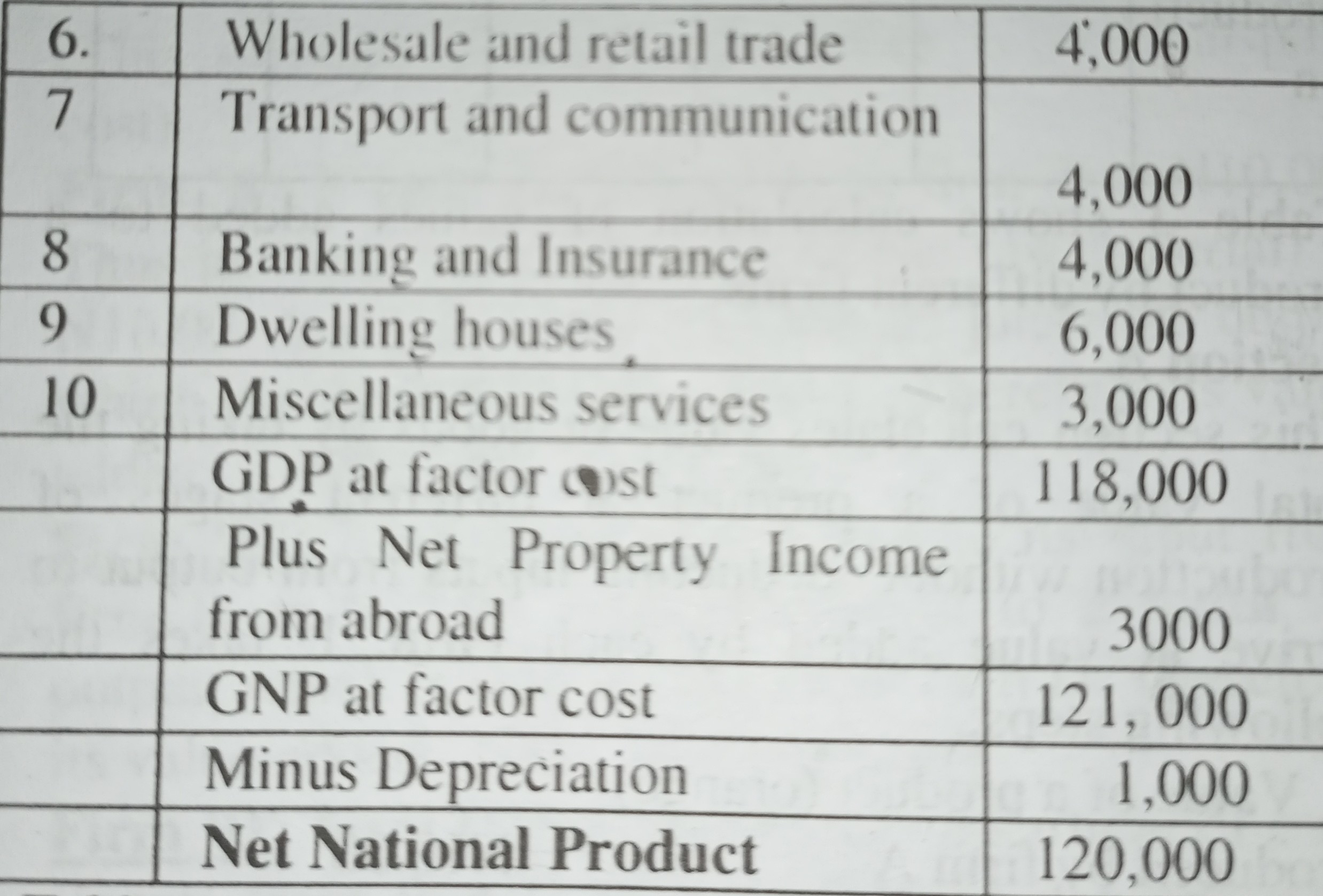 Table 8: shows imaginary figure of through the Output Method (in thousand).

1) GDP at market price = sum of all values added by all economic sectors.

2) GDP at factor cost = Sum of all values added by all economic sectors (all producers) + subsidies indirect taxes.

4) GNP at factor cost = sum of all values added by all economic sectors (all producers) + NPYA + subsidies – indirect taxes.

It doesn’t take the value of a product at different stages of production. It rather estimates the value each firm adds to a product until it is finally produced. As the sum of the values added by different firms is equal to the market price of the product, this method therefore implies adding up the market (retail) prices of all final goods and services (and not market prices of all outputs – intermediate products but ONLY final products) in a country in a given period. Also the values of goods and services that don’t require the calculation of value-added have to be estimated. They include the output of fishermen, hunters, peasant farmers, etc. In addition, the services of- self-employed individuals, like barbers, lawyers, architects, chartered accountants, doctors, etc. have to be determined and their values should be included in the national income

Furthermore, proper estimates of mining and quarrying products, like petroleum, coal, gravels, sand, etc, have to be included. Also the contributions of transport, communication, distribution, insurance, banking, etc, have to be calculated and their values should be added to the GDP estimate. The value of goods of all public corporations and services of public utilities like electricity, water and other government free services like health care, education, public administration, defence, etc. should be thoroughly. assessed and their values should be added to the GDP figure. The sum of all values added in the country as discussed above gives GDP at market price. When net property income from aboard is added, it becomes GNP at market price. The subtraction of depreciation from the figure gives the NNP at market price

However, the output method is beset with a number of problems like double counting, inadequate record, subsistence production, etc. They cause inaccurate national income estimate; and they make it an ineffective instrument in assessing (determining) the real income of the people periodically or among different countries.

The output method calculates the money value of all goods produced and services rendered in a country in a year. In order to avoid double counting, it only measures final goods or takes value added to goods by all government departments, firms and self employed individuals, like artisans. It also estimates the values of services rendered by all firms (banks, Insurance, transport, etc), professionals (lawyers, medical doctors, etc) and public utilities like electricity, water board and other government free services The sum of values of all final goods and services produced in a year gives us Gross Domestic Production (GDP). The addition of net income from abroad gives us Gross National Product (GNP).

A – E represents the following

A = Value of all final goods produced by all firms.

B = Value of all final goods produced by government.

C = Value of all final goods produced by individuals.

D= Value of all final services rendered by all firms, government and individuals.

Calculate the GDP, GNP and NNP through the output method with these figures (in millions)

Note: The knowledge of the formula enables you to easily discuss the output method on your own words.