‘The sum of expenditures of individuals, firms, governments and foreigners gives the expenditure calculated GDP.’

It involves calculation of all expenditures made on final goods and services by Individuals, firms and governments as well as foreign countries (foreigners). Expenditures are made by these four major bodies which are explained in detail as follow:

Firms mainly spend their money on capital goods, like machines, vehicles, raw materials, factory and office buildings and other items meant for production of goods. We recall that capital goods are goods that are used to produce other goods. They are divided into two major groups: Fixed capital goods are durable goods, e.g. machines, vehicles, tools, factory building, office furniture, and other equipment or tools. While non-durable capitol goods are non-durable items, e.g. stock of inventory, like raw materials, etc. Firm expenditure is referred to as Private Investment (I).

Secondly, we should deduct government expenditure on pension payments, unemployment benefits, payment of interest on public debt, donations to poor nations and other forms of transfer payment as they are not incurred due current production of goods and services. Government spending is referred to as Government Expenditure (G).

Foreign countries and their citizens (immigrants) are also purchasers of goods and services in a country. And such expenditures are also included in the national income estimate. Their expenditures are referred to as Foreign Investment as they mainly spend their money on capital goods.

However, for the purpose of national income accounting, we recognize Net foreign investment (NFI) which is the difference between our investment or purchases from abroad and foreigner’s investment or their purchases in this country. For the sake of simplicity, estimators use net foreign Trade or Net Export for NFI. Net Export is the difference between Export and Import. Thus expenditure method, therefore, consists of four major parts as follow:-

The above major expenditures are shown in a table as follow: 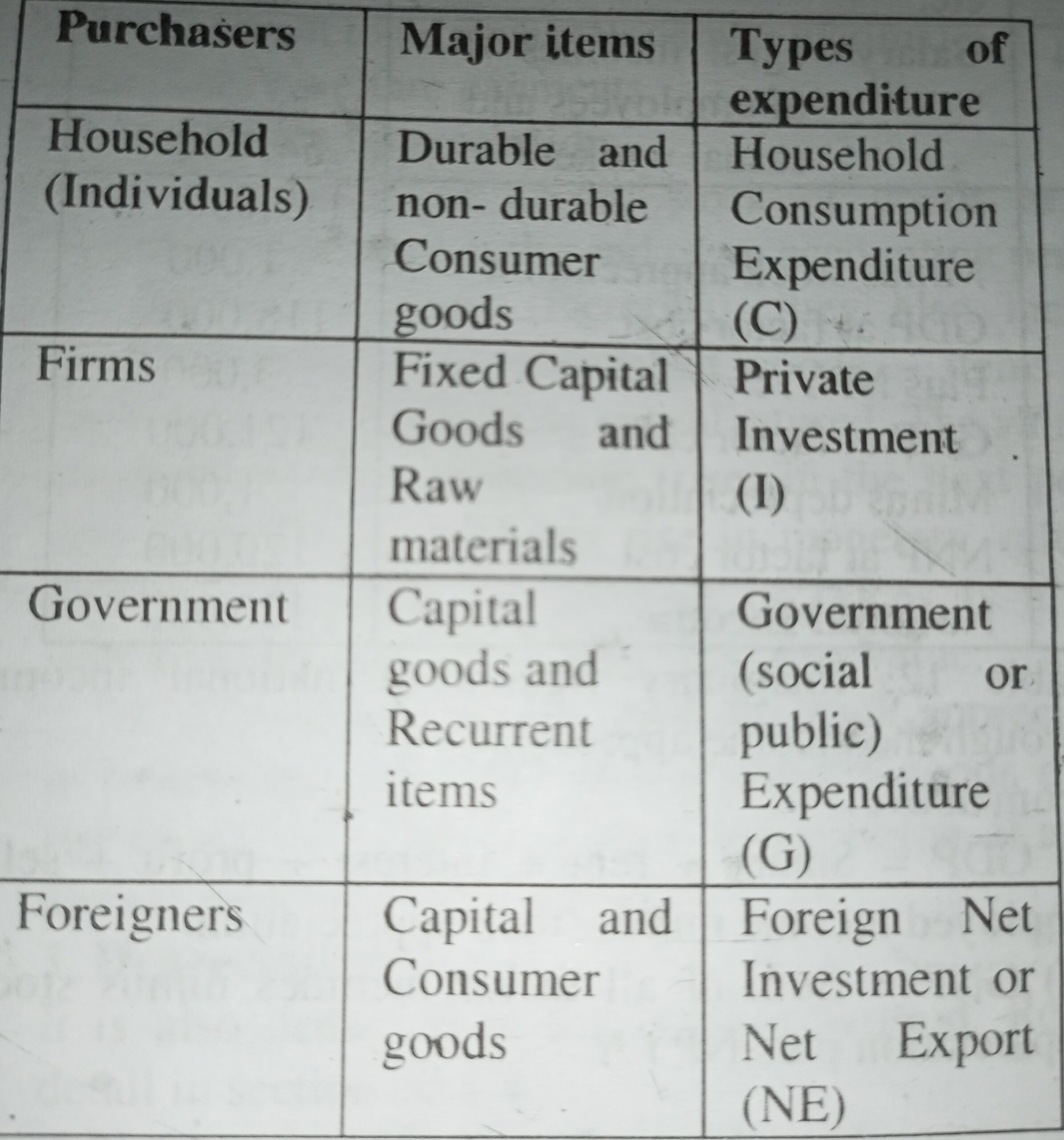 You should note that all the above major purchasers are buyers of services like banking, insurance, transport, etc. As they are not durable items, they are therefore included under the second major item, i.e No 2 of each of the groups in the table. And the sum of all the expenditures gives the GDP?

In order to show the people’s genuine efforts, estimators add certain items and subtract others. They are shown in the summary table below.

Summary of items to be either addedor subtracted under the Expenditure method. These items have been properly explained above. 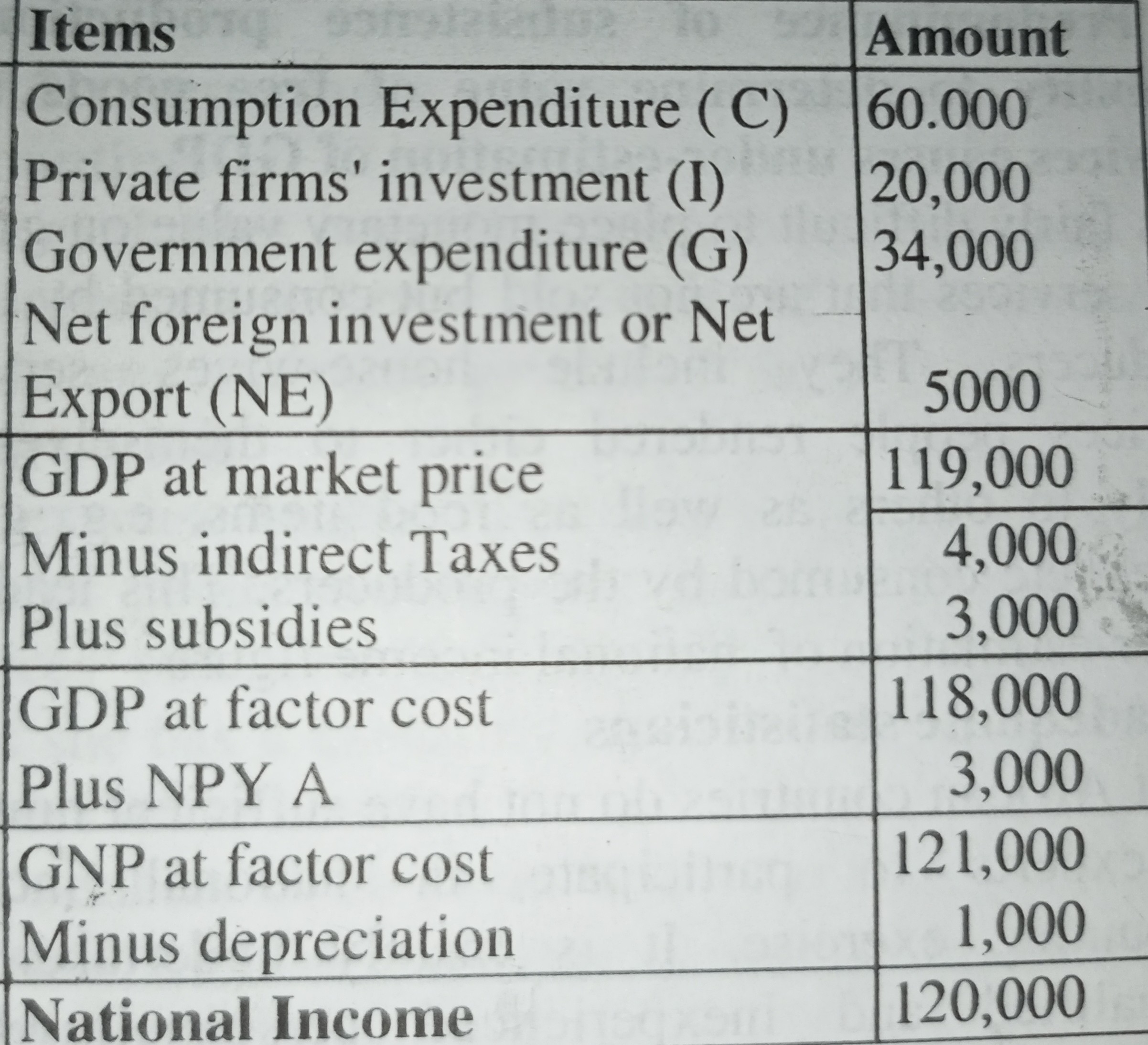 The table an imaginary figures of national income through expenditure method (in thousand). From above:-

It involves calculation of all expenditures made on final goods and services by all purchasers of goods and services: individuals, firms, governments and foreigners in a country in a given period. And estimators take much care in guiding against occurrence of double counting by ignoring (not counting) expenditures on intermediate products or semi-finished goods used in the production of the final goods.

Expenditures are made by four major groups of people or institutions. They include the following:

The expenditure approach has peculiar problems, like inadequate information on all types of expenditure, double counting, difficulty of determining value of unsold goods and work-inprogress and inadequate foreign record. These problems make the expenditure-calculated national income to be quite inaccurate and unreliable means of knowing the actual national income.

It involves calculation of all expenditures made by individuals, firms, governments and foreigners on final goods and services periodically. However, expenditures on semi-finished products are not counted for the avoidance of double counting. And the sum of consumption, investment, government expenditure and net export gives the GNE at market price. The addition of net income from abroad, subsidies and subtraction of indirect tax and depreciation give the NNE at factor cost. However, a number of problems, like inadequate record, make it to be unreliable estimate and ineffective economic tool.

(i). Calculate the national income (GNE) at market price through the expenditure method with the following data

Calculate the GDP, GNP and NNP with the following data (information):-

Calculate the national income with the following statistics (figures);

Students should make a sentence with this phrase ‘final goods and services’ to reveal the measurement of N. Y through the output method.

Statisticians measure the money values of all final goods and services produced in a country in a year. This is more or less the summary of the output method in one sentence.

Students should make a sentence with any of these terms ‘all factors incomes‘, ‘all factors of production’ to indicate measurement of N. Y through the income method.

2) Evaluators calculate all incomes generated (received) by all factors of production in a country in a given period. Any of these two sentences is the summary of the income method in one sentence.