They include the following:-

It is the total amount of utility which a consumer derives (obtains or gets) from consuming many units of a commodity at a particular time. Total utility increases as one consumes more and more units of a commodity. it increases up to the point of satiety greatest level of satisfaction and thereafter it starts to decline as illustrated in figure 1. 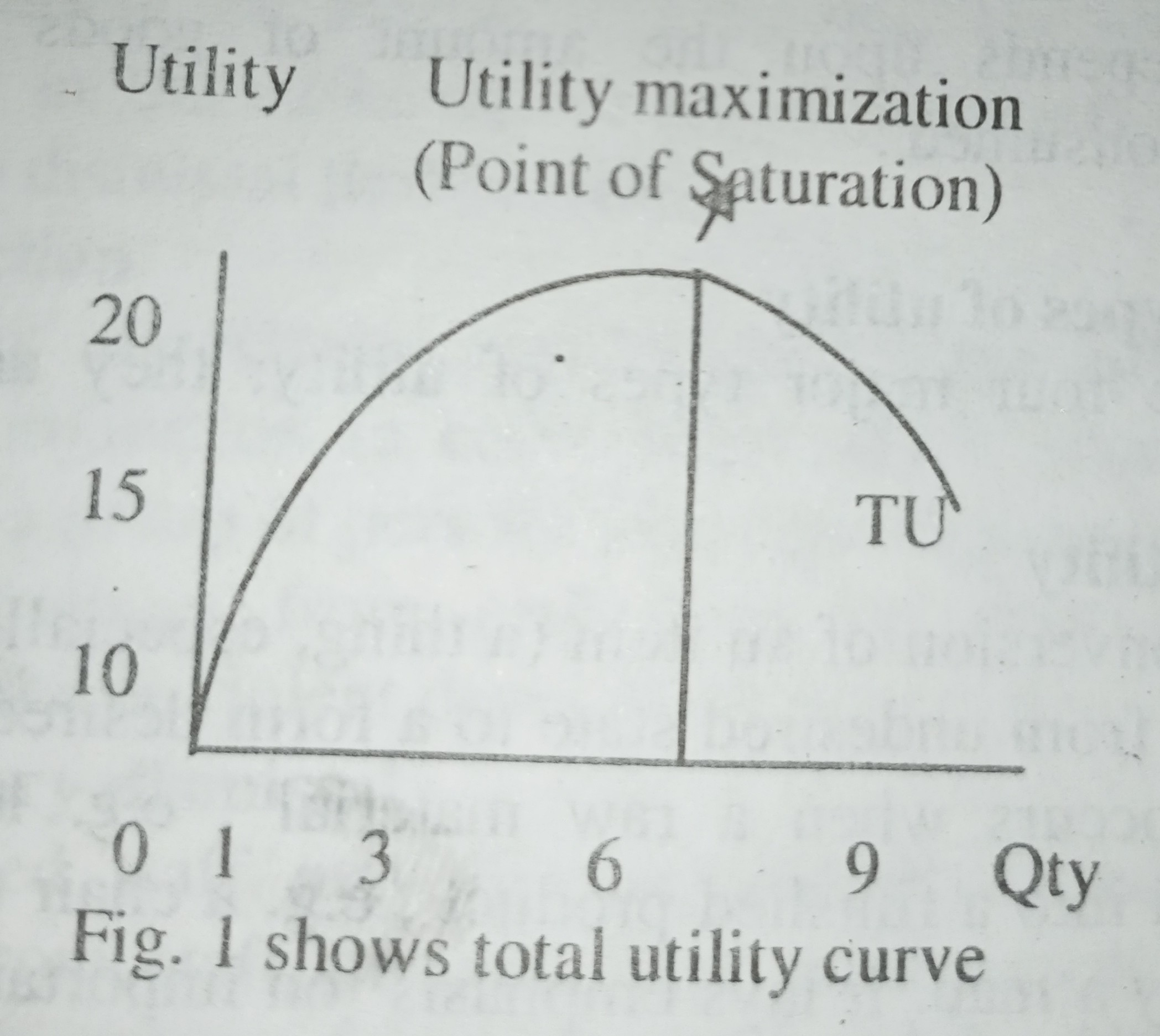 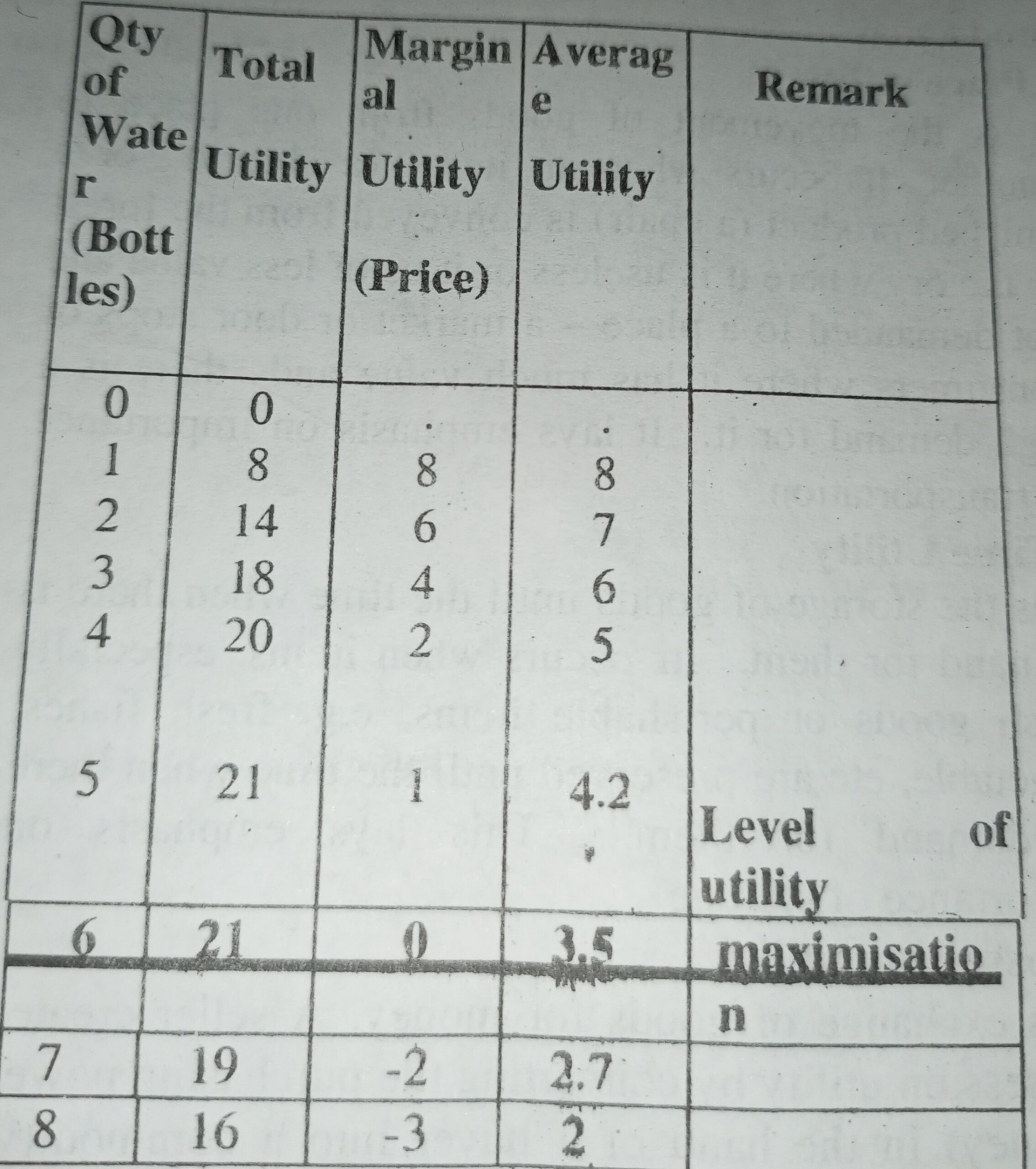 Average utility (AU) is calculated with the following formula:-

From the utility schedule, when the quantity of water consumed is two bottles, total utility is fourteen units. 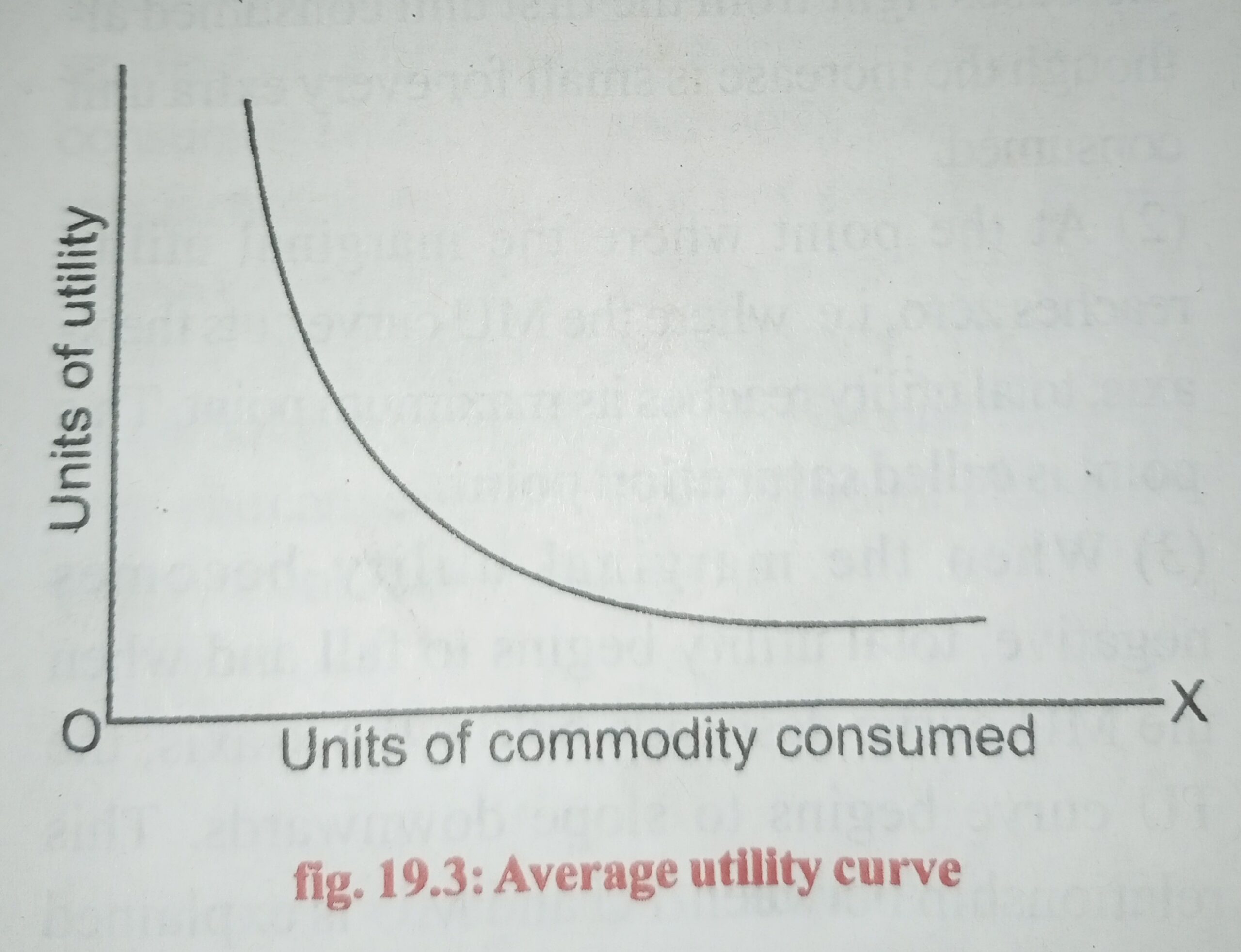 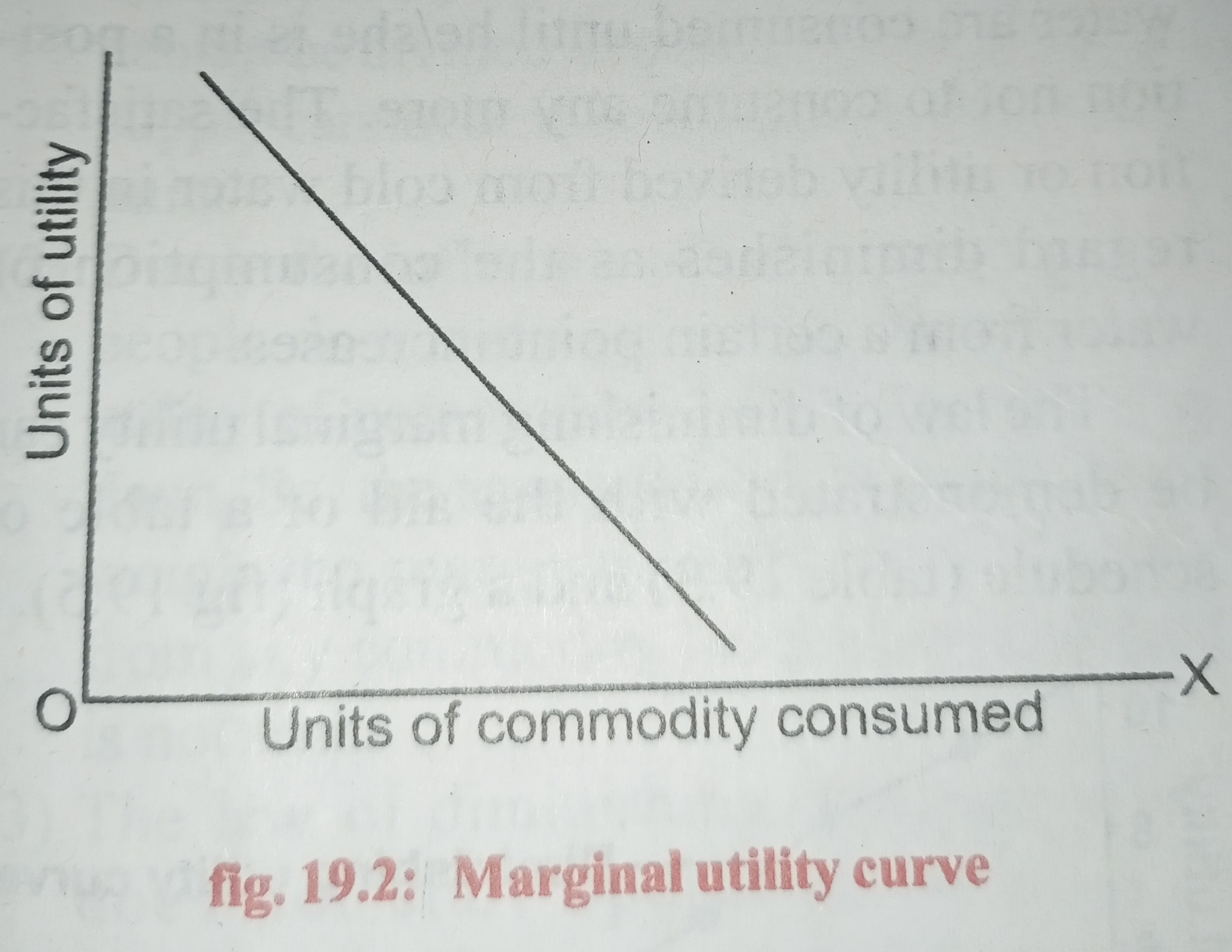 Marginal utility is calculated with the following formula:

Relationship between TU, AU AND MU

Initially, they are all (TU, AU and MU are) equal when a consumer consumes only one unit. As he consumes additional unit (second unit) TU rises, while both AU and MU decreases. MU curve lies below AU curve because the extra satisfaction he derives from additional unit is less than the average satisfaction of all the units consumed. 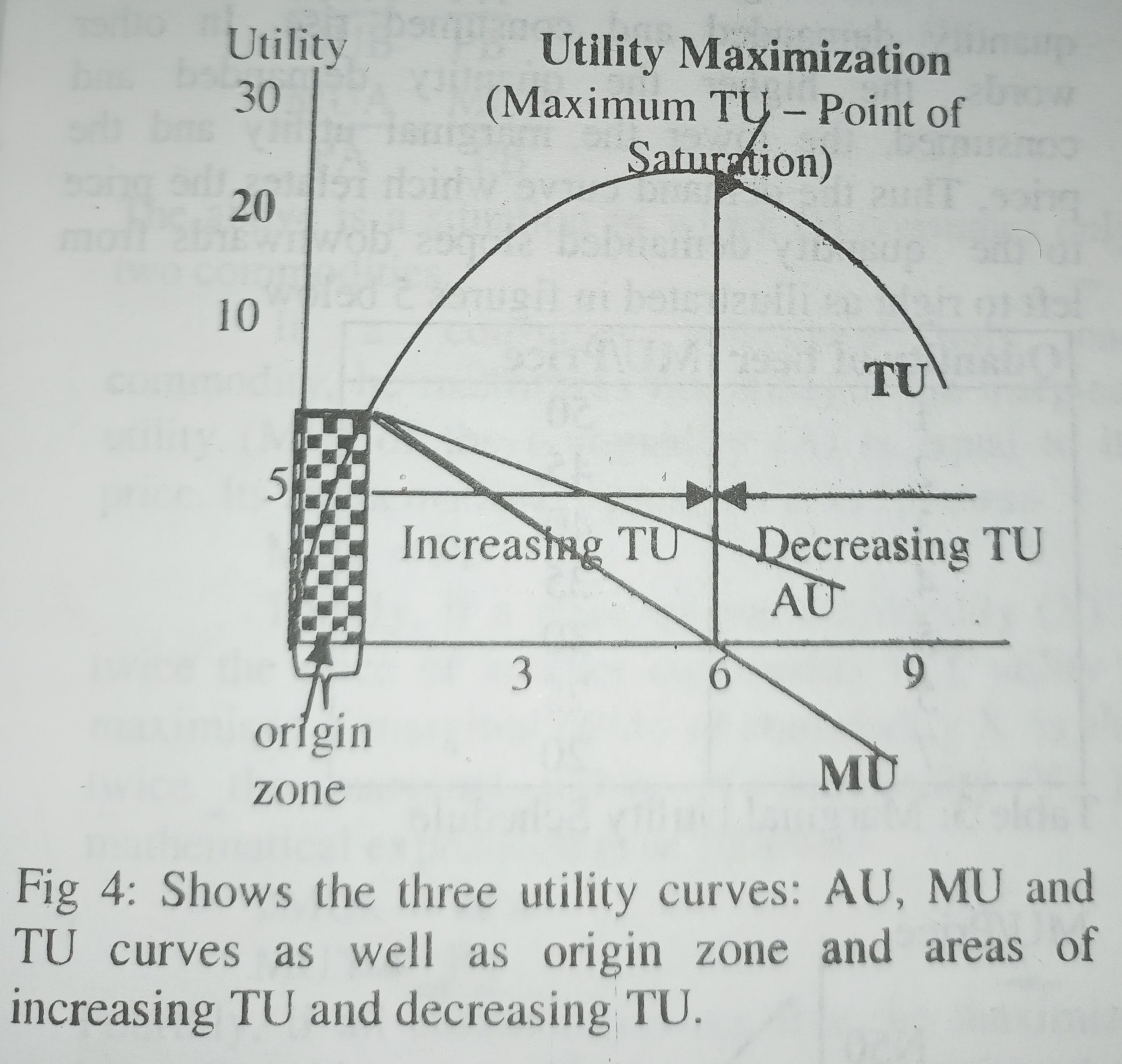 When MU is at zero, TU is at the maximum point – point of satiety (saturation); and AU decreases at a rate lower than MU. Hence MU reaches zero before AU. TU declines and AU gradually approaches zero and MU begins to have negative value (-1, – 2, – 3) as illustrated in the diagram, figure 4 above.

A consumer stops consuming more of the commodity at the point of maximum total utility (point of saturation) – the sixth bottle. If he goes beyond this point (even though the commodity is free e.g. water) there will be negative effect (constipation). Thus total utility declines; and marginal utility becomes negative.

We recall that at the initial state of consumption (1 bottle), total utility (TU), average utility (AU) and marginal utility (MU) are equal. Why, Through mathematical approach at one bottle:

There will be a change in the three concepts if there is additional consumption, like taking a second bottle. Total utility will rise but marginal utility and average utility will decline.

Save
Tags: concepts, economics, of, utility