The law of diminishing marginal utility is based on the following consideration or assumption:

“As the amount of a commodity a person possesses or consumes increases, the utility a consumer derives from successive units declines until marginal utility becomes zero and assumes negative value”.

The law illustrates the declining nature of marginal utility (MU). It stresses (states) that the amount of satisfaction derivable from successive units consumed declines continuously until marginal utility becomes zero and starts having negative figures (values).

At the initial stage of consumption of commodity total utility (TU) increases. And as a person consumes more of a commodity, the satisfaction he derives from successive (additional) units declines until TU reaches the point of satiety (maximum point) and thereafter it starts to decline (reduce).

For instance, a thirsty man will be willing to pay a very high price such as N8.00 for a bottle of ice water for the first time as the utility he will derive from it is quite high. As he possesses more and more of the commodity, the marginal utility (i. e its value) diminishes until it eventually becomes zero; and he is no more willing to take additional bottle even though it is free The above explanation is clarified with a means of a utility schedule – table 2.

From the foregoing discussion and the utility schedule, we wish to state that:

The law of diminishing marginal utility can also be demonstrated with the aid of a table or schedule and a graph below. 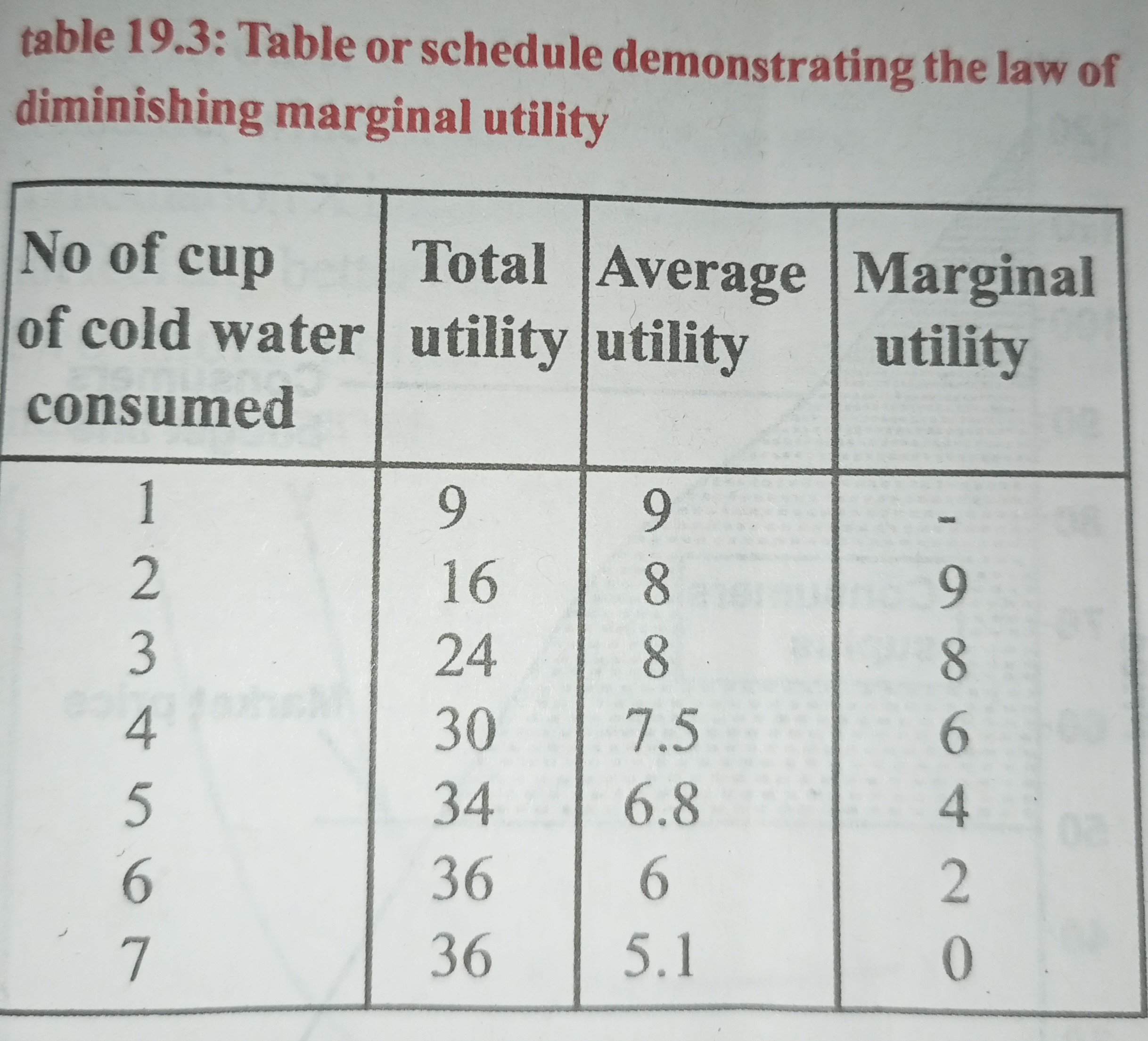 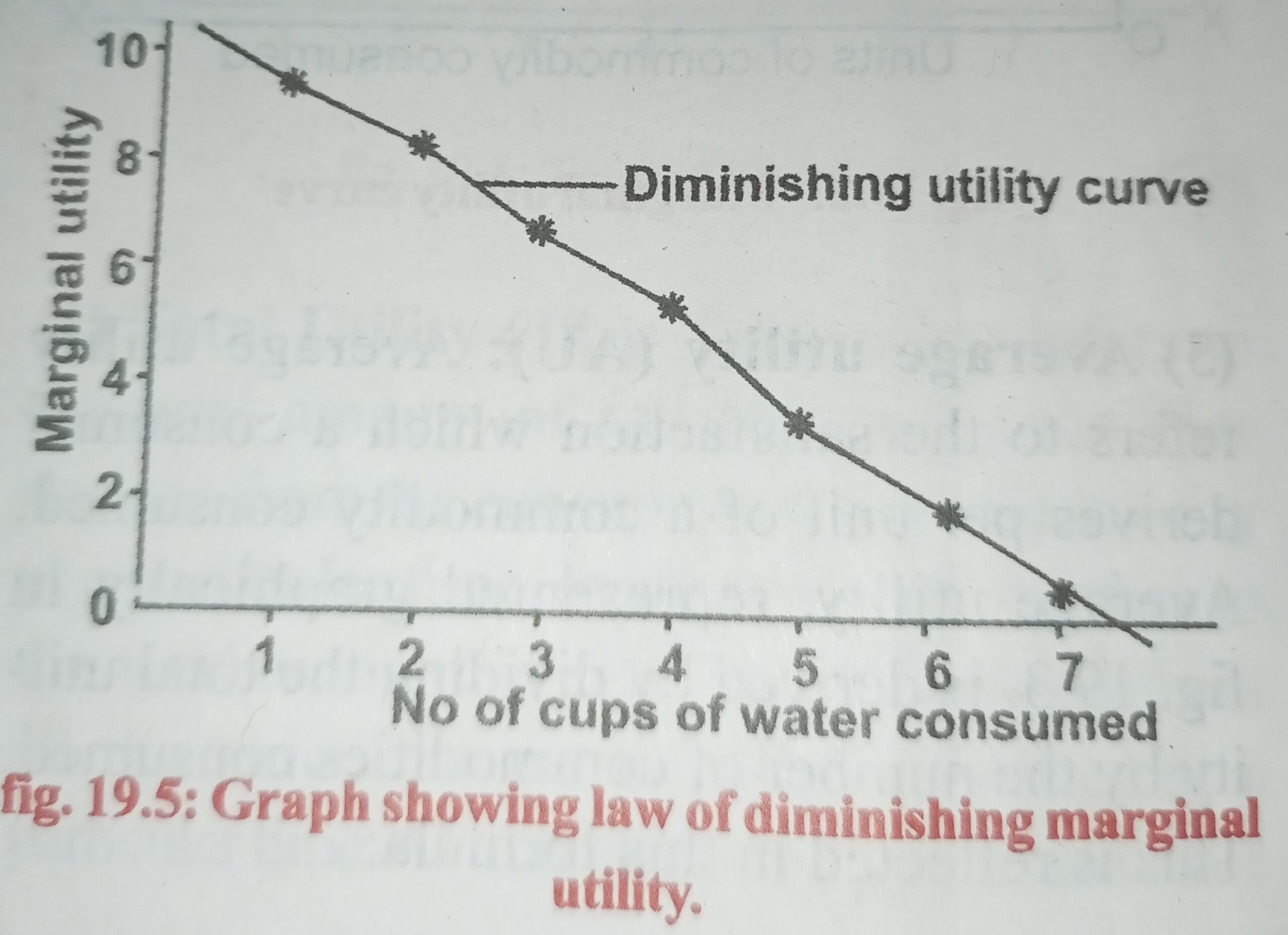 Criticism of the Law of Diminishing Marginal Utility

The law of diminishing marginal utility has been largely criticised on the basis of its assumptions. Most of the assumptions are not realistic.

The Law of diminishing marginal utility (LDMU) can be used to explain the derivation of the demand curve as illustrated below.

A wise consumer buys a commodity if he feels that the satisfaction he will derive from it is either more or equal to its price. As he buys and consumes more units of the commodity, the marginal utility declines. This implies that he will only buy more if the price falls, as the price must be equal to the MU. Thus, as the price falls, the quantity he buys rises: ‘the lower the price, the higher the quantity demanded and bought’.

On the other hand, if the price starts to rise, he will not be willing to buy more because the satisfaction he will derive form additional unit well be less than the price. Thus ‘the higher the price, the less the quantity demanded’.

On the other hand, if the price starts to rise, he will not be willing to buy more because the satisfaction he will derive form additional unit will be less than the price. Thus ‘the higher the price, the less the quantity demanded’. 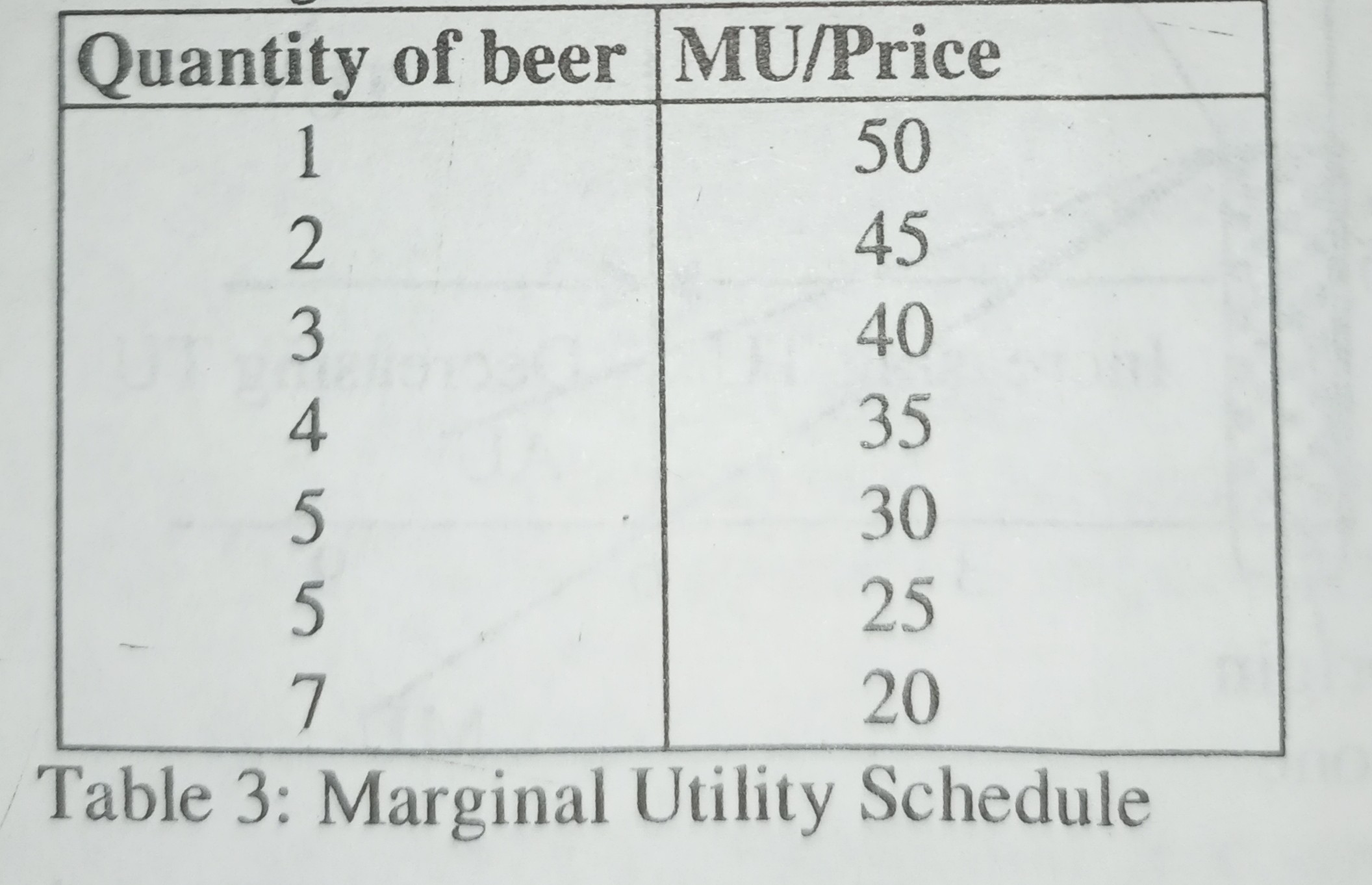 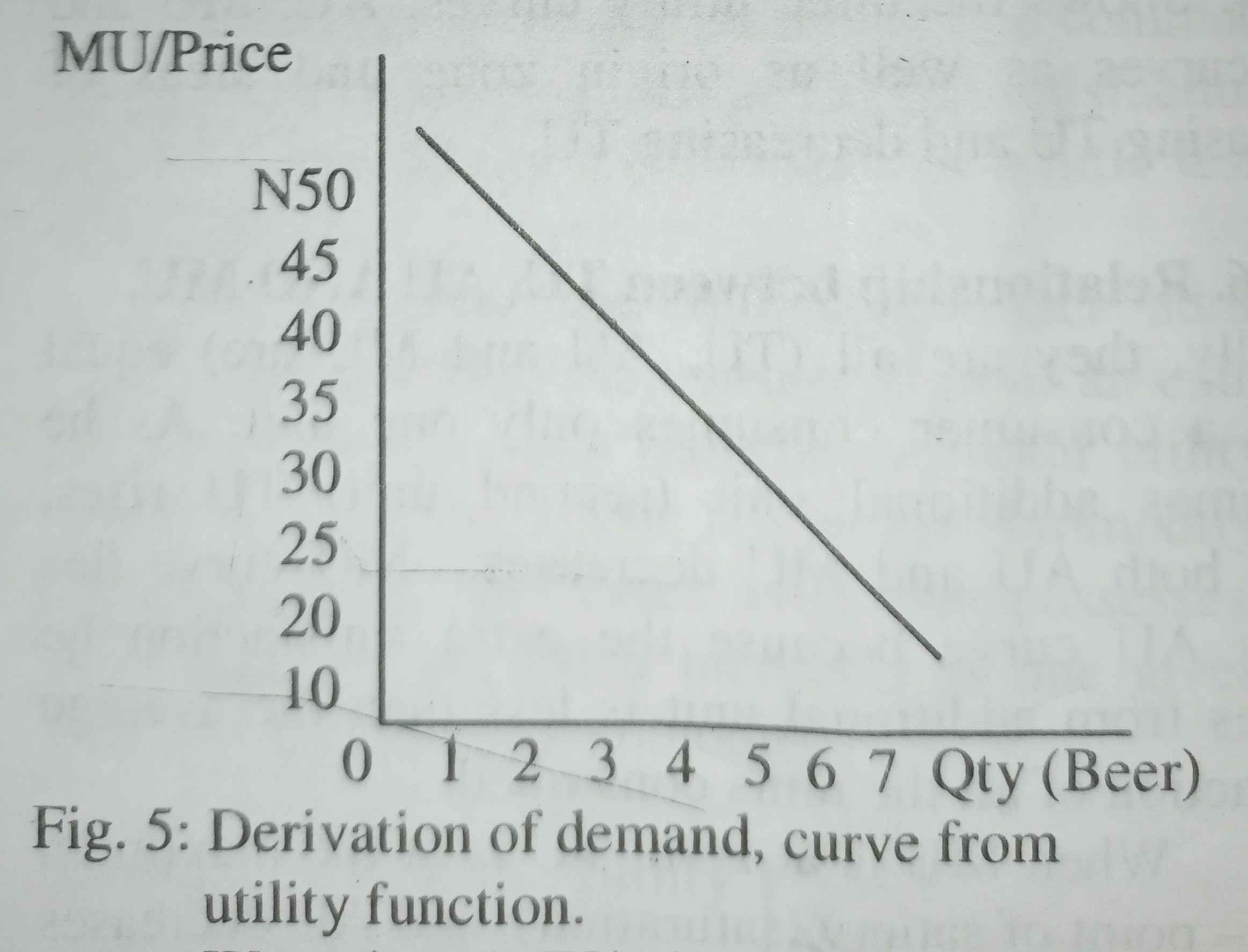 The consumer’s surplus refers to the difference between the amount a consumer budgeted to pay for a particular commodity based on the expected level of satisfaction and the actual amount he paid to have the commodity. The concept of consumer’s surplus is represented in a graph shown in fig. 19.6. 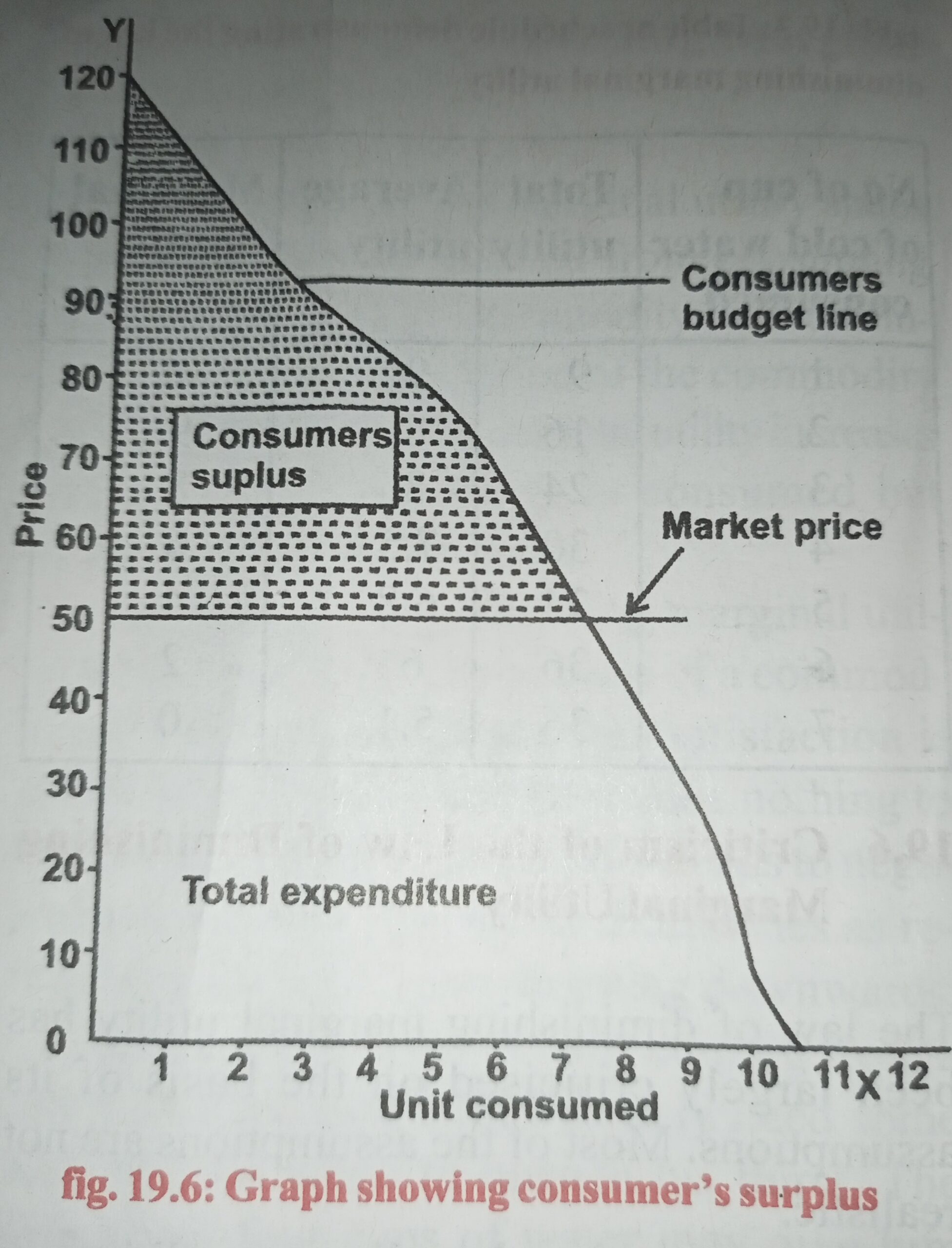 From the above graph, it is observed that when the consumer made use of the very first unit, he was willing to pay as much as N120.00 but the commodity price was N50.00. So, he was able to save about N70.00. Therefore, any amount above the market price of N50.00 represents the consumer’s surplus.

Theory of consumer behaviour is based on the following assumptions:-

A consumer maximizes his utility if he allocates his money among the commodities he consumes in such away that the utility he derives from one Naira he spends on each commodity gives him equal satisfaction. Briefly, utility is maximized if:

The above is a situation in which he consumes only two commodities.

If a consumer consumes only one commodity, he maximizes his utility if his marginal utility (MU) of the commodity (A) is equal to its price. Its mathematical expression is as follows:

Fourthly, if all commodities are free, he maximizes his utility if he consumes them up to the point where their marginal utilities are zero.