Abraham’s father was Terah. He was the descendants of one of those people who were scattered in small language groups after the Tower of Babel incident. He grew up in Ur in Mesopotamia. When Abraham was a small boy, Terah took the whole family from Ur in southern Mesopotamia to Haran in northern Mesopotamia.

When Terah died in Haran, Abraham, who was now a young man, took over the responsibilities of his family. Abraham lived with his family till he was seventy-years. Then God called him. God told Abraham to leave his country. God said:

“Go from your country and your kindred and your father’s house.”

God promised to bless Abraham if he obeyed the call to leave his country. God promised Abraham four things:

When Abraham heard God’s call and the blessings that would follow if he obeyed the call, he immediately left for the new land. Abraham went with his wife, Sarah, and with his nephew Lot, and his wife. They left Haran with all their servants and as much of their property as they could carry. 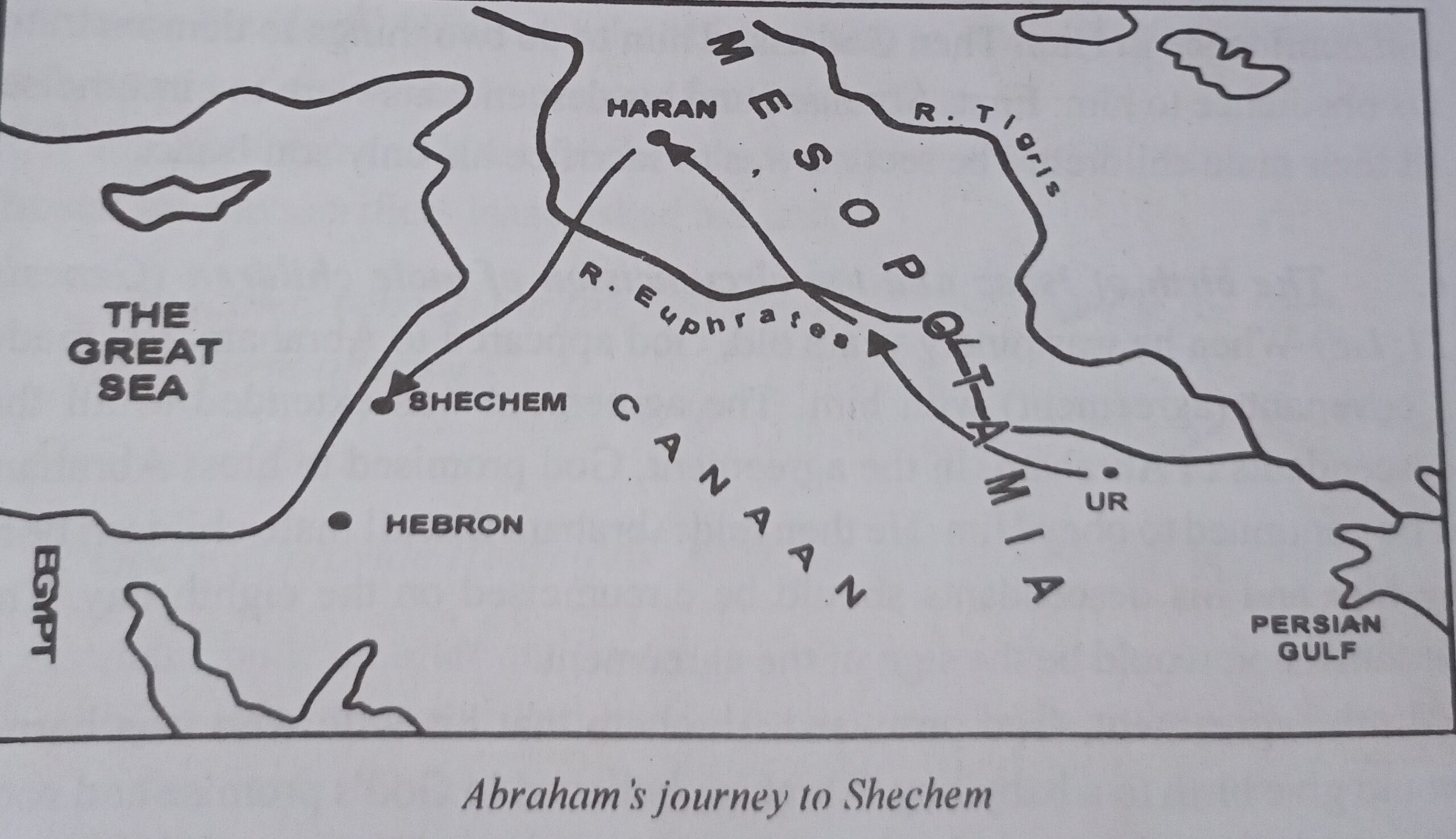 From Haran, Abraham and group travelled southwards for weeks and months. Finally they entered the land of Canaan and came to the city of Shechem. In the time of Abraham, Shechem was an important Canaanite town. It was noted for its religious activities. In the centre of the town was a sacred tree called the: ‘Oak of Moreh’. At this sacred tree, the Canaanites worshipped their gods.

Abraham and his group stopped by the sacred tree and spent the night there. In the night, God appeared to Abraham and promised that this land: Canaan, is the land that He had promised to give to him and all his descendants for his obedience.

In the land of Canaan, Abraham continued to trust God. He put all his hope and confidence in Him. Then God asked him to do two things to demonstrate his obedience to him: First, Abraham and his descendants were to circumcise all their male children. The second was to sacrifice his only son Isaac.

1) The birth of Isaac and the circumcision of male children (Genesis 21:1-8)

When he was ninety years old, God appeared to Abraham and made a covenant (agreement) with him. The agreement was extended to all the descendants of Abraham. In the agreement, God promised to bless Abraham if he continued to obey Him. He then told Abraham that all male children born by him and his descendants should be circumcised on the eighth day. The circumcision would be the sign of the agreement.

In the agreement, God promised Abraham that his wife who was barren would give birth to a baby boy. Abraham believed in God’s promise and soon afterwards his wife conceived and bore him a son. He named him: Isaac. Exactly eight days after Isaac was born, Abraham demonstrated his obedience to God by circumcising him.

One day, when Isaac was about twelve years of age, God asked Abraham to go and offer the child as a sacrifice to Him. God wanted to test Abraham’s obedience and confidence because He knew Abraham loved Isaac very much. Therefore, God appeared to Abraham and commanded him:

“Take your son, your only son Isaac, whom you love, and go to the land of Moriah, and offer him there as a burnt offering upon one of the mountains of which I shall tell you”.

Abraham readily obeyed God’s command without question. Very early in the morning, Abraham made the necessary preparations to go and sacrifice Isaac as the Lord had ordered. He cut wood for the burnt offering. He then saddled his ass, and together with Isaac and two of his servants, they set out for the land of Moriah. It took them three days to reach the site. When they were near the place, Abraham asked his servants to stay behind while he went with Isaac and the wood to prepare for the sacrifice.

When Abraham and Isaac reached the mountain of Moriah, which God had chosen for the sacrifice, Isaac asked his father:

“My father, behold, the fire and the wood; but where is the lamb for a burnt offering?”

“God will provide Himself the lamb for a burnt offering, my son”.

Abraham built an altar and laid the wood on it. Then he took Isaac and bound him with ropes and laid him on the altar. Abraham then took out his knife to slay Isaac for the sacrifice. Just as he was about to slay his son, an angel of the Lord stopped him by saying:

“Do not lay your hand on the lad or do anything to him; for now I know that you fear God, seeing you have not withheld your son, your only son, from me”.

And, Abraham lifted up his eyes and looked, and behold, behind him was a ram, caught in a thicket by his horns. Abraham took the ram, and offered it as a burnt offering instead of his son. Abraham therefore called the name of the place:

‘The Lord will provide’.

Abraham had obeyed God in complete faith to His command. God alone knew what was good for him. God was so happy with the obedient trust of Abraham that He decided to reward him for his faithfulness. Again, the angel called Abraham and said:

After this, Abraham and Isaac returned home.

God wants you to be obedient to your parents at home, teachers at school and elders in your community

You all know that it is not easy to be obedient to your parents at home, teachers at school and elders in your community all the time. So, you pray to God to help you do that. That is very good. You will grow up to become good Christian citizens. Keep it up.

Although some of you know it can at times be difficult to be obedient, yet you refuse to pray to God to help you do that. Because of your refusal to ask God for help, you are disobedient to all at all times. That is not good for you. If you continue with that kind of attitude, you will not grow up to become good Christian citizens. You must learn to pray to God to help you now.

God wants all of you to be good boys and girls by always praying to Him to give you spiritual power to obey your parents at home, teachers at school and elders in your community so that you will all grow up to become good Christian citizens.