The cell is defined as the structural and functional unit of a living organism. In other words, the cell is the simplest, the smallest and basic unit of life. All living things (plants and animals) are made of cells.

The cell is regarded as the basic unit of all living things because it can carry out all life activities such as feeding, reproduction, excretion, growth, adaptation, respiration, definite life span, sensitivity and movement. All these activities possessed by a cell are the characteristics of living things.

Classification of Living Organisms Based on the Number of Cells

Living organisms are classified into two major groups based on the number of cells. These groups are:

History of the Cell

Many scientists contributed to the history of the cell. Among the scientists are:

The cell theory states that:

The various types of microscope include:

The hand lens is the simplest and the most commonly used magnifier in the laboratories for magnifying tiny living things and other objects.

Parts of a microscope

The microscope is made up of many parts which include:

How to use the microscope

The Biology teacher is expected to guide and demonstrate the use of microscope to students in the laboratory.

FORMS IN WHICH LIVING CELLS EXIST

There are four forms in which living cells exist. These are:

1) As Independent or Single and Free-living Organisms: Independent and free living organisms are organisms which possess only one cell and are capable of living freely on their own. Each organism, even though it has only one cell can carry out all the life processes such as feeding, movement, reproduction, sensitivity, excretion, growth, respiration, etc. Examples of independent or free-living organisms are Amoeba, Euglena, Paramecium and Chlamydomonas.

Amoeba Structure: Amoeba has irregular shape and changes constantly. The protoplasm is made of nucleus and cytoplasm. Embedded in the cytoplasm are food vacuole and contractile vacuole. Amoeba moves with the aid of pseudopodia.

Paramecium Structure: Paramecium is often described as having a slipper shape. The cytoplasm is composed of ectoplasm and endoplasm. The nucleus consists of two micronucleus and meganucleus. The cytoplasm also houses the food vacuole, contractile vacuole and cytostome. Paramecium moves with the aid of cilia. 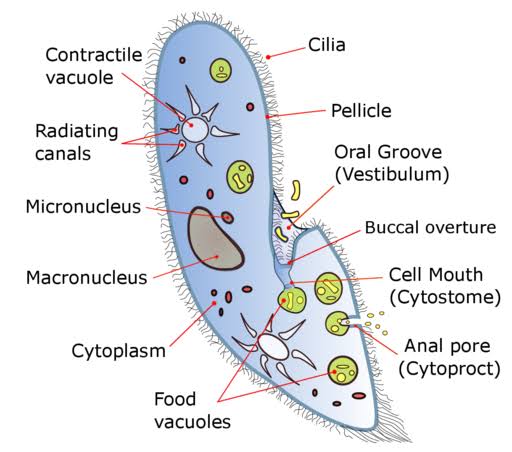 Euglena Viridis Structure: Euglena viridis is a protist and a typical example of an organism sharing the characteristics of plants and animals. The organisms possess flagellum, gullet, contractile vacuole, eye spot, pellicle, myonemes etc which make it an animal and chloroplasts, pyrenoids and paramylum granules which also make the organism a protist. Euglena moves with the aid of flagellum. 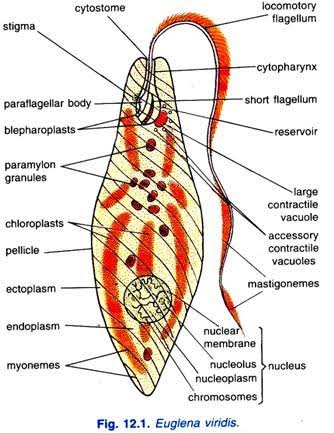 Chlamydomonas Structure: Chlamydomonas is a simple microscopic plant. It is a unicellular plant, having flagella for movement, eye spot, chloroplasts, food vacuole and contractile vacuole. 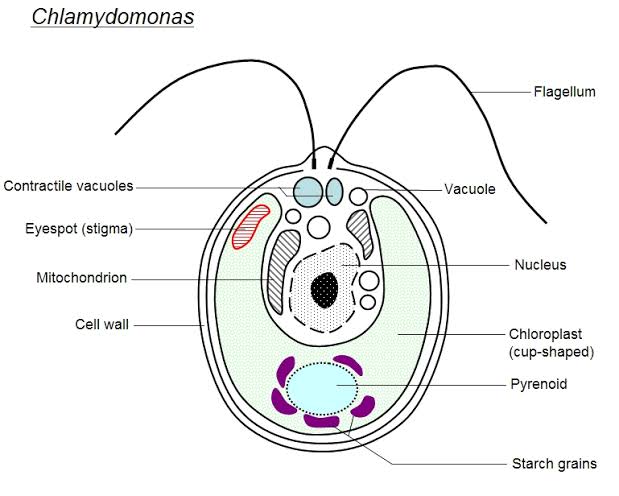 2) As a Colony: Some organisms are made of many similar cells which are joined or massed together but they cannot be differentiated from each other. In other words, these cells form a loosely arranged association of two or more cells but the cells cannot be differentiated from each other. This aggregation of independent cells or protists is called a colony. Examples of organisms which exist as colonies are Volvox, Pandorina and Sponges. 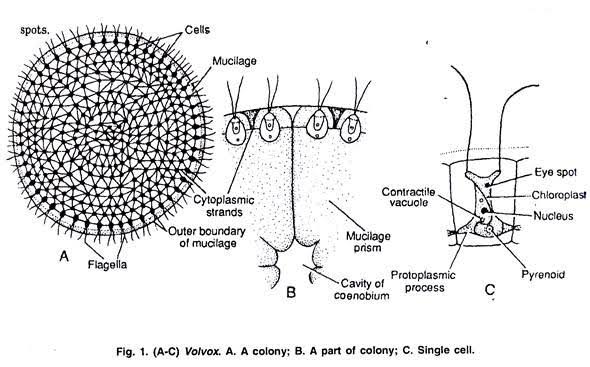 4) As a Filament: Certain cells are organised into filaments in which identical cells are joined end to end to form unbranched filaments. Each cell functions as an independent living cell. Such organisms are multicellular and therefore exist as filament. Popular examples of filamentous organisms are the Spirogyra, Zygnema, Oscillateria and Oedogonium. 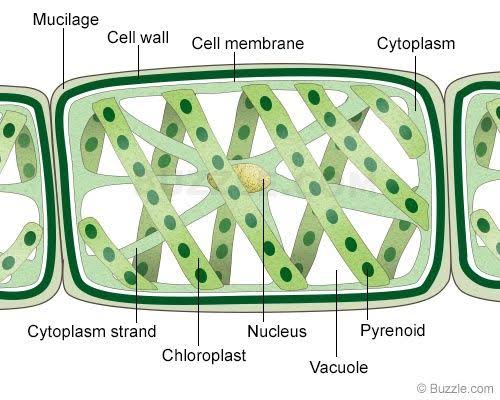 Cells as Part of a Living Organism

STRUCTURES OF PLANT AND ANIMAL CELLS AND FUNCTIONS OF THEIR COMPONENTS

Structure of the cell: The structure of plant cell and animal cell can fully be understood through the use of microscope. The cell is composed of protoplasm which can be divided into two main parts: the cytoplasm and nucleus. Each cell (plant or animal) is bounded by a thin membrane. The cytoplasm is a fluid material that consists of cytoplasmic organelles such as lysosome, golgi bodies, endoplasmic reticulum, mitochondria, vacuoles etc. The nucleus is bounded by a nuclear membrane and it consists of chromosomes (chromatin granules) and nucleolus.

The animal cell in addition has centrosomes. The plant cells in addition also has starch granules, cellulose cell wall and some plastids, e.g. chloroplasts. The structure and functions of the components of the cells or organelles are outlined in the table below. 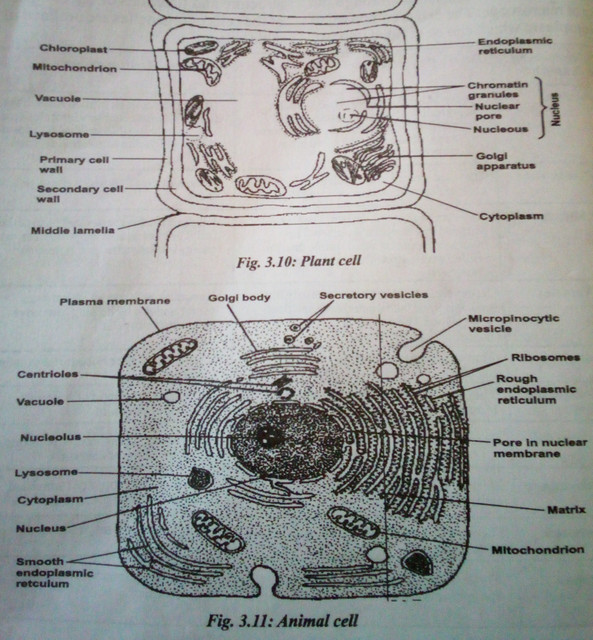 SIMILARITIES AND DIFFERENCES BETWEEN PLANT CELL AND ANIMAL CELL

Similarities: Both plants and animals cells have in common the following organelles: 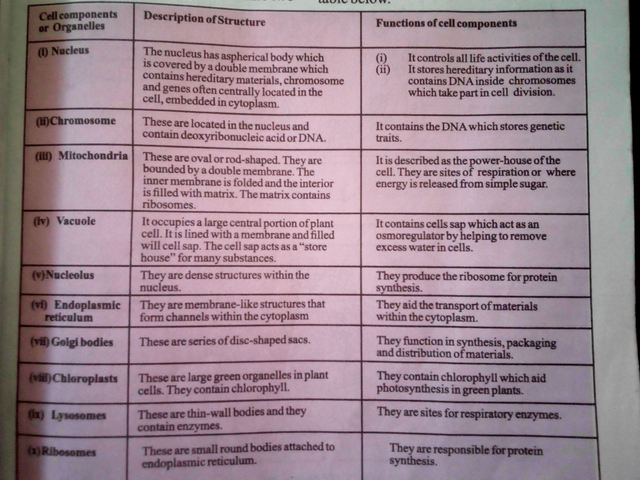