Diffusion is defined as the process by which molecules or ions of a substance (i.e. gases and liquids) move from a region of high concentration to a region of low concentration until they are evenly distributed. The substance involved in diffusion may be liquid, gases or solid.

The rate or speed of diffusion is controlled by a number of factors which include:

Temperature: High temperature increases the speed at which molecules move. Thus, the higher the temperature, the faster the rate of diffusion.

Experiment to Demonstrate Diffusion in Liquids

Eventually, the colour spreads evenly throughout the water medium so that the water have the same shade of purple colour. 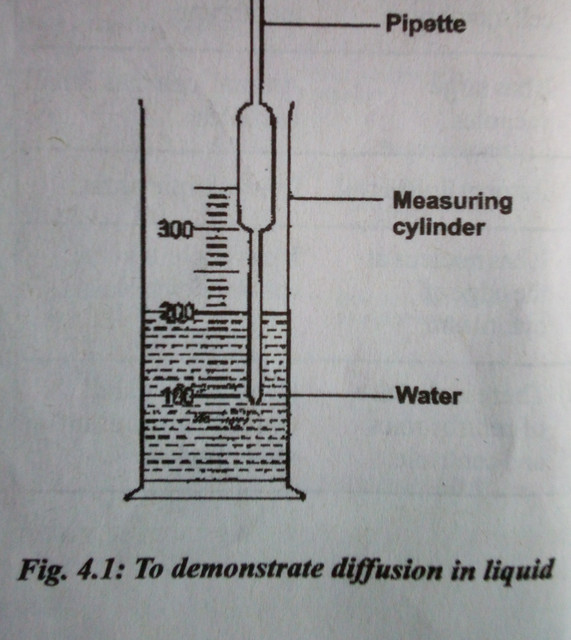 Experiment to Demonstrate Diffusion in Gases

Importance of Diffusion to Animals

Diffusion plays important roles in the life of animals through the following processes:

Importance of Diffusion to Flowering Plants

Diffusion is important to flowering plants in the following ways:

Diffusion in Nature or Non-living Conditions

Diffusion is also very important in nature or non-living conditions through the following processes:

Osmosis is defined as the flow of water or solvent molecules from a region of dilute or a weaker solution to a region of concentrated or stronger solution through a selectively or differentially permeable membrane. It should be noted that osmosis is a special form of diffusion.

There are three major conditions which are necessary for osmosis to take place. These are:

Hypotonic: When a cell of a living plant or animal is surrounded by pure water or solution whose solute concentration is lower, water passes into the cell by osmosis. The solution is therefore said to be hypotonic.

Isotonic: When the solute concentration of the cell and its surrounding medium are the same, the solution is said to be isotonic.

Hypertonic: When the cell is surrounded by a stronger solution, water will be lost by the cell. The shrinking of the cell is as a result of the surrounding solution being hypertonic (Fig. 4.2). 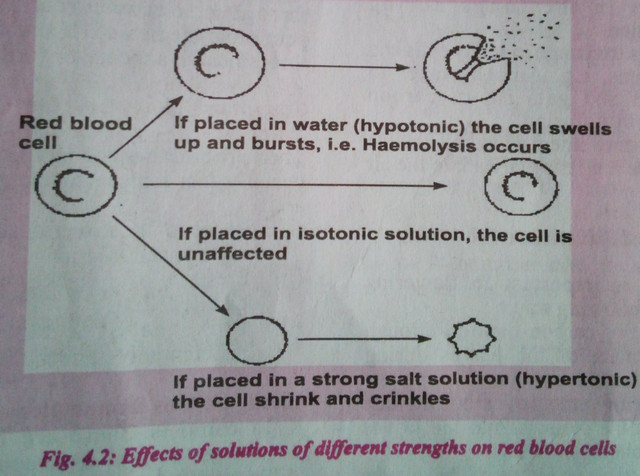 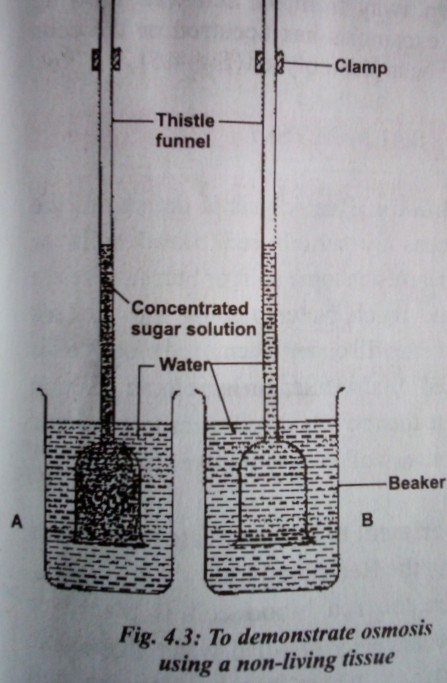 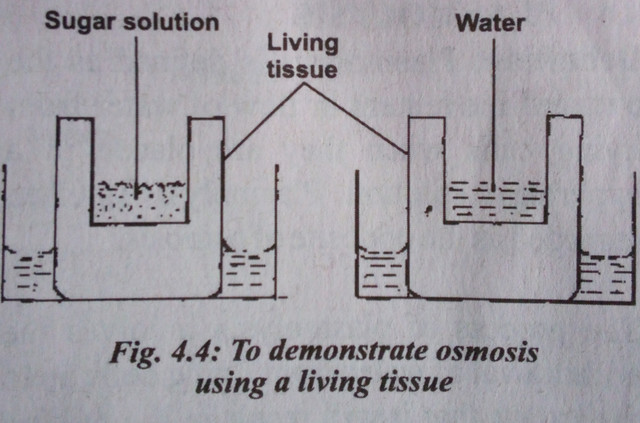 Differences Between Diffusion and Osmosis

Plasmolysis is defined as the outward movement or flow of water from living cells when they are placed in a hypertonic solution. Plasmolysis is often regarded as the opposite of osmosis.

The process of plasmolysis involves the withdrawal of water from living cells up to the extent that it will result in the pulling away of the cytoplasm from the cell membrane or cell wall. As a result of this, the cytoplasm will shrink and the whole cell will collapse. When this happens, the cells are said to be plasmolysed. This will eventually lead to wilting or death of the plant.

Process of Plasmolysis in Plant Cell

When a living plant cell is placed or surrounded by a sugar or salt solution, a more concentrated or hypertonic solution than the cell sap, water will be lost from the cell to the stronger solution resulting in exosmosis. As a result of this, the vacuole will shrink, pulling the cytoplasm away from the cell wall or membrane.

Place a piece of Spirogyra filament on a glass slide containing few drops of water, covered with cover slip. Observe the set up under the microscope. The cells are noticed to be normal or turgid.

Add few drops of concentrated salt or sugar solution on the tissue. Leave it for 15 minutes. Observe under the microscope. It will be observed that the cytoplasm is drawn away from the cell wall showing that exosmosis has occurred or the cells have been plasmolysed (Fig. 4.5). 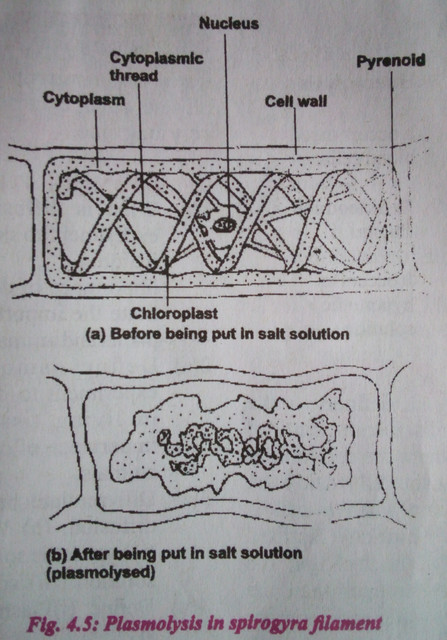 Definition: Haemolysis is defined as the process by which red blood cells or corpuscles become split or burst as a result of too much water passing into it. This situation will occur when a red blood cell is placed in a weaker or hypotonic solution where the red blood cell takes in water and become swollen and may even burst.

When the red blood cell is placed or surrounded by distilled water (hypotonic solution), water passes into the cell showing that osmosis has taken place. This results in the increase in size of the cell or the cell becomes turgid or swollen (fig. 4.6). For the fact that the distilled water is hypotonic or less concentrated than the blood cell, water is absorbed by the cell. This will make the cell to swell and burst. Similarities and Differences Between Plasmolysis and Haemolysis Similarities

Turgidity is defined as the condition in which cells absorb plenty of water up to a point where the cell is fully stretched. At this point, the cell is said to be turgid. Turgidity occurs when a cell is placed in hypotonic solution (distilled water). As a result of the fact that the cytoplasm solution is stronger than the water, the cell absorbs water and becomes turgid.

Turgidity is useful to the plants because it makes them stand erect, gives support to the stem, leaves, flowers and guards cells.

Flaccidity is defined as the condition in which plants lose water to their surroundings faster than they can absorb. When plant looses more water, it is said to be flaccid. Flaccidity normally occurs when there is no water in the soil or during drought. Such continuous loss of water to the surroundings may cause the plant to wilt or even die if it continues for a very long time.