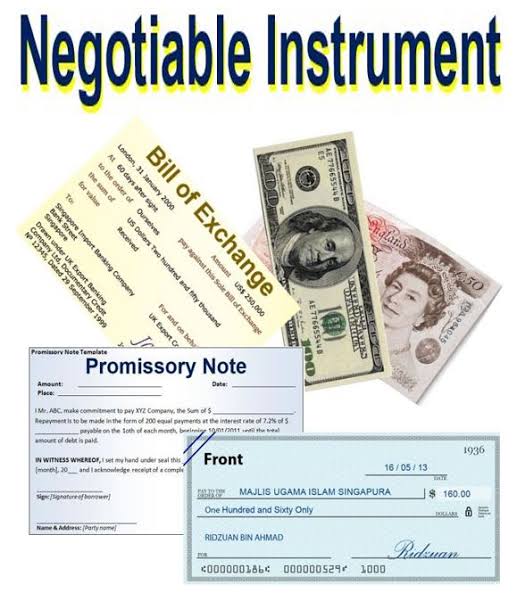 A negotiable instrument is a document evidencing an obligation which is transferable by mere delivery or by delivery and endorsement. Such delivery, operating to transfer all legal rights to the obligation evidenced, free from defects in the transferor’s title. It is also a document possessing certain qualities and entitling the holder to a specified sum of money.

The Bill of Exchange Act defines a bill of exchange to be: “An unconditional order in writing, addressed by one person to another, signed by the person giving it, requiring the person to whom it is addressed to pay on demand or at a fixed or determinable future time a sum certain in money to, or to the order of a specified person or to bearer.”

Features of Bill of Exchange

Parties to a bill

The parties to a bill are the people who are liable on it. These are:

1) Drawer: This is the person who makes out the bill, signs and issues it, i.e ., the creditor to whom money is owing.

2) Drawee: This is a person to whom the bill is drawn and who after acceptance is called, an acceptor.

3) Payee: This is a person to whom the money is paid. The payee of the bill is the party to be paid the amount or sum stated on the bill. In addition, there are other parties who receive their power from the payee. These are:

ii) before it was overdue;

iii) without notice of previous dishonour by non-payment;

vi) without notice of any defect at the time of negotiation.

There are two kinds of bills. These are:

1) Inland Bills: This is a bill which is or purports to be

2) Foreign Bill: This is a bill used for making a payment arising out of foreign trade. It is similar to an inland bill and is drawn in a set of three. Bills are accompanied with shipping documents, e.g. bill of lading, invoice, certificate of origin and consular invoice. The bill is then a documentary bill.

Differences between Cheque and Bill

Similarities between Cheque and Bill of Exchange

A promissory note is defined as, “An unconditional promise in writing made by one person to another, signed by the maker, engaging to pay on demand or at a fixed determinable future date, a sum certain in money or to the order of a specified person to bearer.”

Parties to a Promissory Note

Promissory notes are of two kinds: inland and foreign.

An inland note is one which is or on the face of it purports to be both made and payable within a country; any other note is a foreign note.

Features of a Promissory Note

Distinction between a bill of Exchange and Promissory Note

Noting or protesting is necessary

There are two kinds of acceptance: