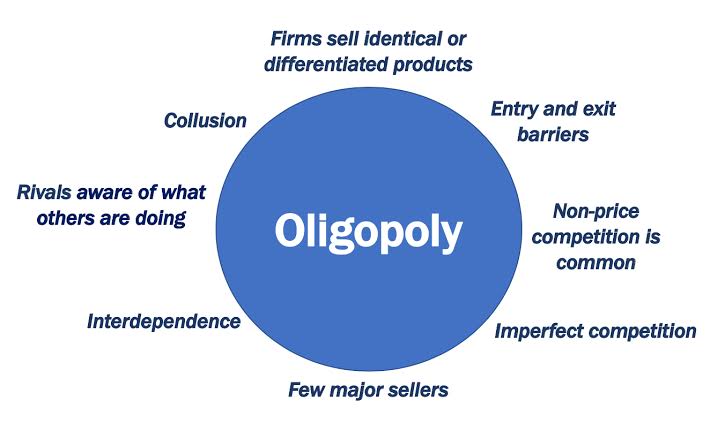 Oligopsony, the opposite of oligopoly, is a market situation characterized by a few buyers of a commodity.

An oligopoly situation may arise if industry comprising of many small firms is dominated by a few large enterprises; and they supply a very large proportion of the industry’s output. Thus their actions have much effect on the market. This is the prevailing situation in automobile and petroleum industries. They are dominated by a few large companies that supply over 60% of total output.

Oligopoly has the following important features:

One of the major factors leading to the existence of oligopoly is presence of economies of large-scale production undertaken by only very large firms. It makes a few firms to dominate the market. Thus a small number of firms can produce a very large output which forms a lion share of the market.

The market for certain goods and services have limited capacity. It can’t absorb (take) a large number firms. Thus the number of firms in the industry are restricted to a few number. Among them are aircraft and silicon ship industries; others are aeronautical engineering and wrist-watch repairing service industries.

The existence of a few firms in an industry or a few sellers ina country may be due to the act of parliament. The parliament or a government of a country may make a law to restrict the number of firms or sellers to a few numbers in a particular industry.

An industry may consist of many firms. But the adoption of strategic behaviour, like acquisition, combination and predatory practices, can reduce the number of firms to a few. And this coupled with entry restriction make the industry to retain the image of oligopolistic market structure.

The strategic behaviour include the following:

There are two types of oligopoly: Perfect and Imperfect Oligopolies.

It is a single buyer of a commodity or service. The buyer is called Monopsonist. A good example of monoposonist is Railway corporation. It is the only buyer of railroad tracks, train and its spare parts.