Wages and Salary are rewards for labour’s services. They are amount of money paid to labour for their involvement in production of goods and rendering of services.

Wages are rewards or amount of money paid to casual workers. They (casual workers) are group of people who work on temporary basis. They are paid on daily or weekly basis. Wages earners (casual workers) are only paid for the days they work; and they are not entitled to certain fringe benefits, like annual leave payment, Pension entitlement, etc.

Salary is a reward for or a specific amount of money paid to permanent staff on monthly basis. Deduction is not made from their earnings (salary) if they are absent from work. They are entitled to all fringe benefits, like annual leave payment, pension entitlement, etc.

Salary is a fixed cost and it is debited to profit and loss account. While wages are variable costs and they are debited to trading account.

Wage rate may be defined as the rate at which labour is paid for the services it renders in production.

(a) Time rate system: The time rate system is the type in which wages paid to labour are based on the number of hours worked. Time rated wages apply to workers whose wages are paid on hourly, daily, forthnightly or monthly basis.

Situations where time rate system can be applied

(b) Piece rate system: The piece rate system is concerned with the wages paid to labour based on the work done. In this system, payment to workers is related to the work done or output. The output of the worker is measured and he is accordingly rewarded.

Factors Responsible for Variation in Wages

The factors for the differences in wages are as follows:

Wages can be determined through the following:

(a) the forces of demand and supply in a market economy.

(b) government activities and policies.

(c) the activities of trade unions.

(a) The forces of demand and supply in a market economy

The wages of labour in a market economy can be determined through the forces of demand and supply. In a competitive labour market, there are so many employers and unorganised employees resulting in a situation where a single employer or employee cannot influence the wage rate either by refusing to be employed or to employ. Wage rate in a competitive labour market can be determined in the following manner:

The determination of wages by demand and supply can be demonstrated by the graph below. 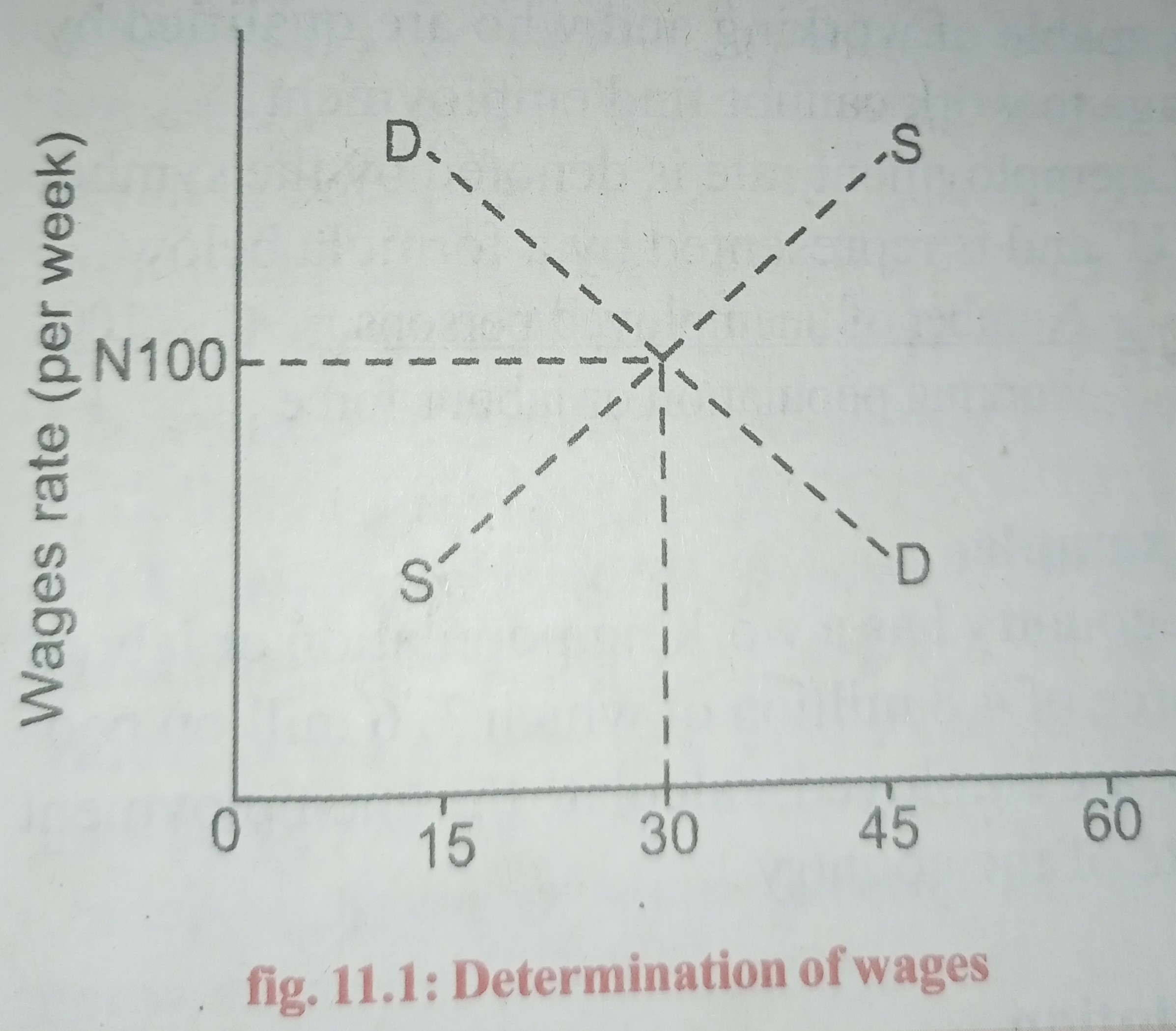 (b) Government activities and policies

(c) The activities of trade unions

Methods of conflict resolution between Trade Union and Management

The weapons at the disposal of trade union for resolving conflicts or trade dispute includes the following:-

Employers’ Association is a combination of employers formed primarily for collective negotiation with trade union(s) as well as with government.

A good example of employers association is that of the Nigerian Employer’s Consultative Association (NECA) formed in 1957. While trade unions are usually interested in negotiations about wage increases and improving the working conditions of workers, employers’ associations are normally interested in discussing ways of increasing productivity. Through collective bargaining on these matters, mutual agreements are reached by both the trade union and employers’ association.

Factors which Influence the Level of Wages

Save
Tags: and, economics, salary, wages