Unemployment exists if the number of people who are willing to work and seeking jobs exceeds the number of declared vacancies. That is, supply of labour exceeds demand for labour. Lord Beverage defined ‘full employment’ as ‘more Jobs than men’. Conversely, unemployment is “more men or applicants than available jobs”.

“Unemployment is a situation in which people who are legally qualified, willing to work and seeking jobs can’t secure gainful employment.’

It is a rate expressed as a percentage of the total labour force.

It is calculated as follows.

A country has a working population or labour force of 4.8 million of which 3. 6 million people are employed, calculate the unemployment rate of the country. 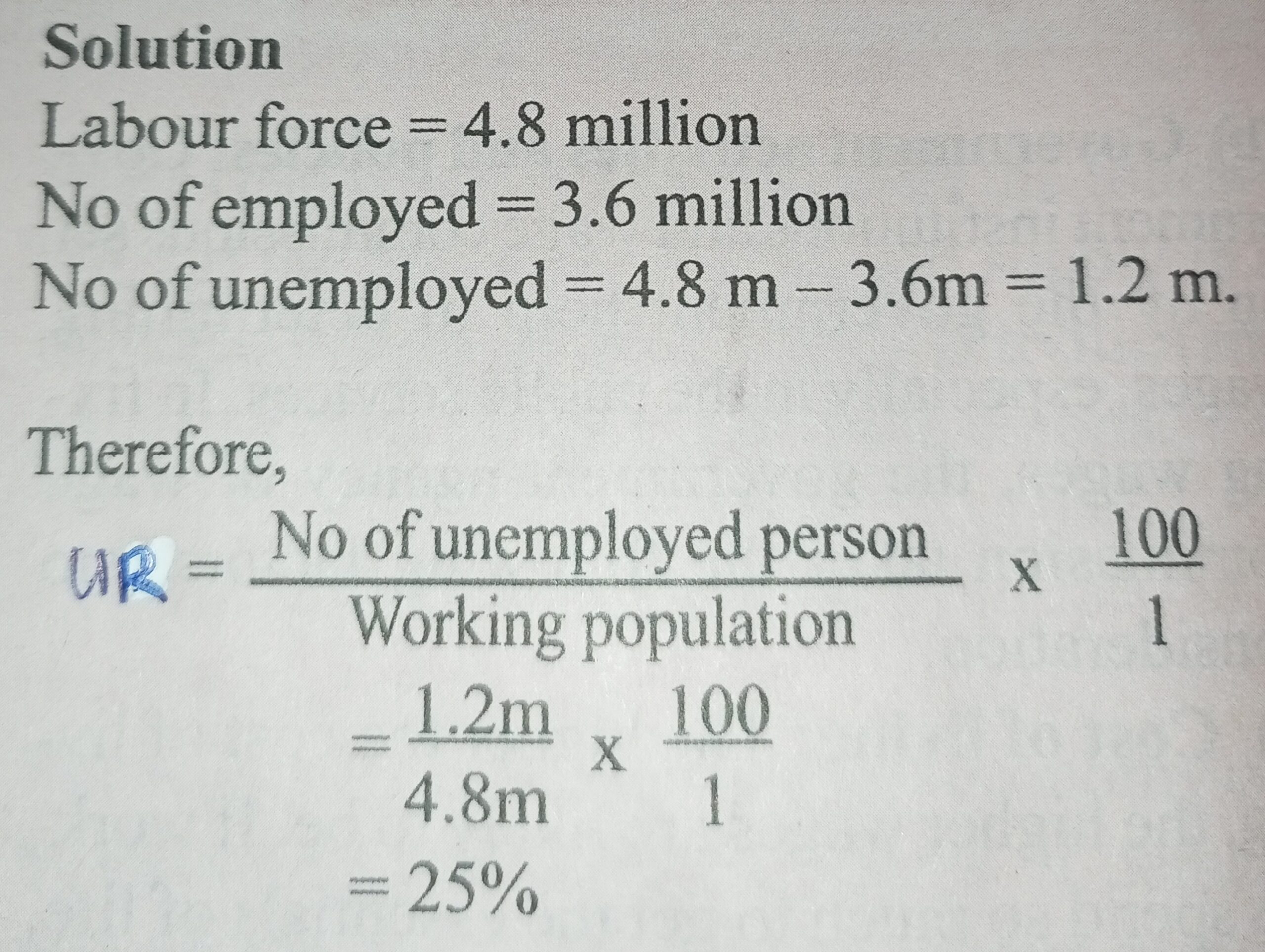 An increase in the unemployment rate may be due to:

Unemployment rate of about 2-5% in any society is a normal or good phenomenon (thing). It signifies a dynamic economy as such people are out of job on account of labour turnover (changing of jobs). Hence 95 – 98% of labour force being employed is termed as a full employment.

The following are the major types of unemployment:

8) Others: The following are the minor types of unemployment:

3) Residual unemployment caused by unhealthy state of mind or body disability: In every society, there are pockets of people who are handicapped. They are not fit to work on account of either physical or mental disability. Many firms deem it imprudent (consider it unwise) to engage their services. And many governments don’t portray (show) serious concern either. Thus there exist perpetual pockets of unemployment of disabled people. The type of unemployment resulting from the above is called “Residual Unemployment”.

Proper training: They should be trained either by their parents, relatives or government to acquire appropriate or befitting skills which would enable them to be employed.

4) Frictional unemployment – Caused by “normal turnover of labour”: There is always a constant movement of labour (new work force) into and (old workers retiring) from the labour force as well as its movement between occupations, industries and states. And due to the time lag, a certain amount of labour is bound to remain unemployed for any given time. And unemployment arising from such movement and other economic frictions (distortion of economic activities) is called ‘frictional unemployment’.

(a) It is due to changing of jobs.

There is a change in demand (a change in the type of goods which people wish to buy) from pen to biro, egusi soup/garri to fried rice and salad, from bicycle to motor car/aeroplane, from typewriter to computer, from mud house to sky-scrapper (multistorey building), etc.

The technicians (workers) who produce pen, egusi soup/garri, bicycles, typewriter and mud house don’t have the skill to produce the new products (biro, fried rice/salad, motor cars/aeroplane, computer, sky-scrapper, etc) which are now in high demand. Therefore, old workers are retrenched (terminated) and they are replaced with the new technicians (new workers). The unemployment arising from this situation is called structural unemployment. Structural unemployment is, therefore, unemployment arising form change in the production process (technique of production) due to changes in pattern of demand (a change in taste and fashion).

6) Technological Unemployment caused by introduction of robots, automation or remote control in factories: Nowadays, production is carried out at a rapid rate in order to meet the increasing demand for goods and services. Thus manually operated machines and plants are now being replaced with remote-control plants. In other words, many organizations especially production firms are now introducing robots or automation into their factors for:

And the unemployment resulting from this introduction of automation in plants is called ‘Technological Unemployment’.

Its cure: Affected workers should move to areas or states in which their services or skills are needed.

7) Equilibrium unemployment: It occurs when the National Income is in equilibrium.

The national income is in equilibrium when “aggregate expenditure equals real national income”; and there is neither inflation nor deflation. Even at full employment or national income equilibrium, an insignificant (very small) amount of labour remains unemployed due to certain lapses, like labour turnover – frictional unemployment.

The following are the minors types of unemployment:

(a) Voluntary unemployment: It occurs when people deliberately withdraw their services due to unsatisfactory conditions of work, especially during industrial crisis or strike. It also arises from unwillingness to work.

(b) Involuntary unemployment: It occurs when the action of a certain group of people, like strike in major industry (oil firm), forces the subsidiary industries like contractors’ workers to become unemployed. If Texaco (Nigeria) Limited is temporarily closed due to industrial crisis, a contracting firm (Globestar Nig. Ltd) attached to or working in Texaco premises will also be affected. The unemployment in Texaco is voluntary while in Globestar is involuntary.

Similarly, if school is on long vacation, the catering firm (restaurant’s owner) inside the school will be involuntarily unemployed. This type of unemployment is called ‘involuntary unemployment’.

(c) Disguised unemployment: It mainly refers to under-employment. It occurs when people are not gainfully employed or fully engaged. That is, the work does not occupy their full time. This occurs mostly in the ministries. Some workers may only work for two or three hours, and they remain idle for the remaining six or five hours of the day. It implies that labour is not effectively utilized.

(d) Causal unemployment: This is a concept mostly applies to casual workers especially those of contracting firms and sea and airports (Ports Authorities). They don’t work on permanent basis but on casual (daily) basis. They are only paid for the days or period they work. Such workers remain unemployed whenever a contract is completed or ships and aircrafts are not at the ports.

(d) Search unemployment: It is due to failure (inability) of certain people, especially skilled or learned people, to secure desired employment or employment in their areas of specialization. Among those mostly affected are Engineers, doctors. Many medical personnel prefer remaining unemployed until they secure jobs in hospitals.