This unit can store instruction, data and intermediate results. This unit supplies information to the other units of the computer when needed. A memory is just like the human brain. Computer memory is the storage space in computer where data is processed and instructions required for processing are stored. The memory is divided into large number of small parts. Each part is called cell. Each location or cell has a unique address which varies from zero to memory size minus one. For example if computer has 64k words, then this memory unit has 64 * 1024 =65536 memory location. The address of these locations varies from 0 to 65535.

Memory is primarily of three types

Primary memory holds only those data and instructions on which computer is currently working. It has limited capacity and data get lost when power is switched off. It is generally made up of semiconductor device. These memories are not as fast as registers. The data and instruction required to be processed earlier reside in main memory. 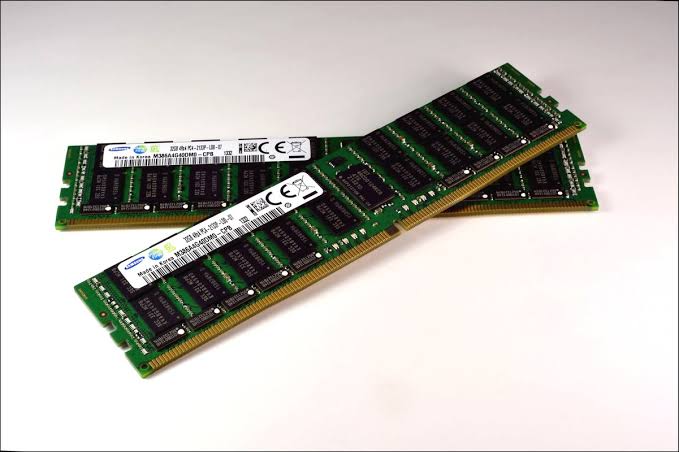 Main memory is divided into two categories, which are RAM and ROM.

A RAM constitutes the internal memory of the CPU for storing data, program and program result. It is read/write memory. It is called random access memory (RAM).

Since access time in RAM is independent of the address to the word that is, each storage location inside the memory is as easy to reach as other location and takes the same amount of time. We can reach into the memory at random and extremely fast but can also be quite expensive.

RAM is volatile, i.e. data stored in it is lost when we switch off the computer or if there is a power failure. Hence a backup uninterruptible power system (UPS) is often used with computers. RAM is small, both in terms of its physical size and in the amount of data it can hold.

RAM is of two types:

A) Static RAM (SRAM): The word static indicates that the memory retains its contents as long as power remains applied. However, data is lost when the power gets down due to volatile nature. SRAM chips use a matrix of 6-transistors and no capacitors. Transistors do not require power to prevent leakage, so SRAM need not have to be refreshed on a regular basis. Because of the extra space in the matrix, SRAM uses more chips than DRAM for the same amount of storage space, thus making the manufacturing costs higher. Static RAM is used as cache memory, needs to be very fast and small.

Characteristics of the Static RAM (SRAM)

B) Dynamic RAM (DRAM): DRAM, unlike SRAM, must be continually refreshed in order for it to maintain the data. This is done by placing the memory on a refresh circuit that rewrites the data several hundred times per second. DRAM is used for most system memory because it is cheap and small. All DRAMs are made up of memory cells. These cells are composed of one capacitor and one transistor.

Characteristics of the Dynamic RAM

ROM stands for Read Only Memory. The memory from which we can only read but cannot write on it. This type of memory is non-volatile. The information is stored permanently in such memories from the factory. A ROM, stores such instructions as are required to start computer when electricity is first turned on, this operation is referred to as bootstrap. ROM chip are not only used in the computer but also in other electronic items such as washing machine and microwave oven. 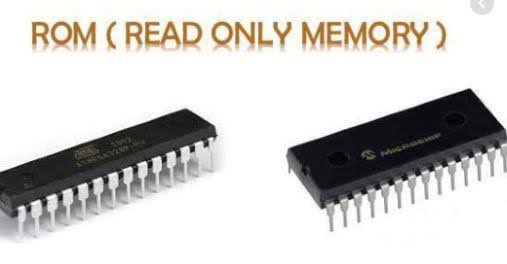 This type of memory is also known as external memory or non-volatile. It is slower than main memory. These are used for storing data and information permanently. CPU directly does not access these memories instead they are accessed via input-output routines. Contents of secondary memories are first transferred to main memory, and then CPU can access it.

A) Floppy Disk: A floppy disk, or diskette, is a disk storage medium composed of a disk of thin and flexible magnetic storage medium, sealed in a rectangular plastic carrier lined with fabric that removes dust particles. They are read and written by a floppy disk drive (FDD). Floppy disks, initially as 8-inch (200 mm) media and later in 5.25-inch (133 mm) and 3.5inch (90 mm) sizes.

B) Hard Disk: A hard disk drive (HDD) is a data storage device used for storing and retrieving digital information using rapidly rotating discs (platters) coated with magnetic material. An HDD retains its data even when powered off. Data is read in a random-access manner, meaning individual blocks of data can be stored or retrieved in any order rather than just sequentially.

C) Flash Drive: USB flash drives are often used for the same purposes for which floppy disks or CD-ROMs were used, i.e ., for storage, back-up and transfer of computer files. They are smaller, faster, have thousands of times more capacity, and are more durable and reliable because they have no moving parts.

D) Compact Disk (CD): A compact disc is a small, portable, round medium made of molded polymer for electronically recording, storing, and playing back audio, video, text, and other information in digital form. Standard CDs have a diameter of 120 millimetres and can hold up to 80 minutes of uncompressed audio or 737 MB of data. The Mini CD has various diameters ranging from 60 to 80 millimetres; they are sometimes used for CD singles, storing up to 24 minutes of audio or delivering device drivers.

E) Digital Video Disk (DVD): It is an optical disc technology with a 4.7 gigabyte storage capacity on a single – sided, one layered disk, which is enough for a 133 -minute movie. It can be single or double sided, and can have two layers on each side. Two layered DVD will hold up to 17 gigabytes of video, audio, or other information. DVD uses the MPEG-2 file and compression standard. DVD is an optical disc storage format, invented by Phillips, Sony, Toshiba and Panasonic in 1995. It offers higher storage capacity than compact discs while having the same dimensions.

A binary digit is logical 0 & 1 representing a passive or an active state of a component in an electric circuit.

A group of 4 bits is called nibble. Nibbles are important in hexadecimal and binary coded decimal (BCD).

A group of 8 bits is called byte. A byte is the smallest unit which can represent a data item or a character.

A computer word like a byte, is a group of fixed number of bits processed as a unit which varies from computer but is fixed for each computer. The length of a computer word is called word-size or word length and it may be as small as 8 bits or may be as long as 96 bits. A computer stores the information in the form of the computer words.