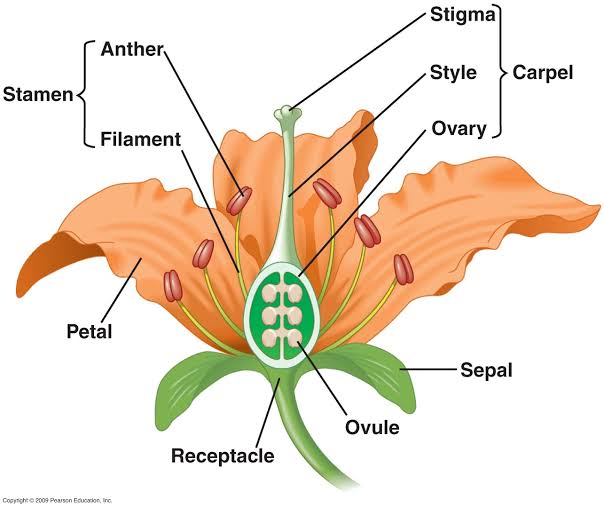 The flower is the reproductive structure of flowering plants. It contains the male and female sex organs which enable them to exhibit sexual reproduction. Fertilization inside the flower often leads to the production of seeds which are capable of germinating into new plants. THE STRUCTURE OF A FLOWER

A flower is a cluster of modified leaves which is borne on a shortened stem, the flower stalk or pedicel.

The flower is made up of four floral parts.

These floral parts are usually arranged in concentric rings, one above the other, on the receptacle or thalamus. The swollen tip of the pedicel is shown in (Fig 29.1 and 29.2). 1) The Calyx: The calyx consists of sepals which are usually small and green. This protects the flower which is in the bud. The outermost whorl of a flower is made up of three to five sepals. They may be separated (polysepalous) or joined to form a cup (gamosepalous).

There may be an epicalyx of bract below the calyx as in Hibiscus flower.

2) The corolla: The petals, collectively known as the corolla form the second whorl or floral part inside the sepals. In many plants, they are the eye-catching part of the flower. Most flowers have four to ten petals which may be separated (polypetalous) or joined to form a tube (gamopetalous). Generally, petals are brightly coloured and scented which attract pollen-transfering animals (pollinators). When both the petals and sepals look alike, e.g. lilies, they are collectively known as the perianth.

3) Androecium: The androecium are the male reproductive organs of a flower. The whorl inside the petals is a group of stamens collectively known as the androecium.

The anther is a 2-4 lobed structure. Pollen grains are produced in these lobes within the region called pollen sacs. When the pollen grains mature, the anther lobes split to release them. Pollen grains are fine yellowish particles. Each pollen grain is made of:

When a pollen grain lands on the mature stigma of the same type of flower, it germinates to form a pollen tube.

4) Gynoecium: The gynoecium are the female reproductive organs of a flower. It is the innermost whorl of the floral parts of the flower.

The gynoecium consists of carpels. It may consist of one, a few or many carpels. A separate carpel or a single structure of several fused carpels is called a pistil.

Pistils have the followings

The ovary contains one or more ovoid structures called ovules. Each ovule houses a female gamete or egg cell. After fertilization, the ovary develops into a fruit while the ovules develop into seeds.

Parts of a flower

The position of an ovary in the receptacle dictates how it is classified. An ovary can be described as superior, inferior and half-inferior.

The various kinds of placentation are: