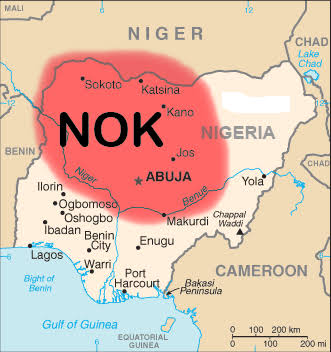 Nigeria has not produced evidence of remains of man or man-like creatures such as living between one and three million years ago in Eastern and Southern Africa.

However, archaeological evidences from various parts of Nigeria, suggest that parts of the country had been settled by man since the Paleolithic or Old Stone Age period: 500,000 – 900,000.

Early man in Nigeria developed tools which consist of pebbles fashioned for chopping and cutting tools.

Archaeologists call such tools oldowan type tools. This is because these types of tools were first discovered at Olduvai Gorge in Tanzania. These evidences were specifically found in Bornu.

Archaeological evidence show that early man in Nigeria advanced from the early Stone Age to the later Stone Age. He soon began to make hand axes. These were tools which were oval and pointed in shape. They also had cutting edges and were trimmed from both sides. These tools were replica to those found in Acheul in Northern France and so were referred to as acheulean. Evidence of these tools present themselves in Jos, Plateau State.

The oldest of surviving groups of Nigerians are to be found in the forest of the South. The largest known groups of this region were the Yoruba and Edo; others are the Igbo and Ibibio.

These evidences have been thrown up by centres of early civilisation. These sites include Nok, in Jos and Taruga in South-East Abuja. Others are lle-Ife, Esie Iwo-Eleru, Lokoja, Benin and Igbo-Ukwu.

Early History of Nigeria relates to the period of history in which archaeological evidence has shown that people were already living in Nigeria at Iwo Eleru, Ondo State as early as 11,000 BC and perhaps earlier in Ugwuelle-Uturu in Okigwe in south eastern Nigeria. In Taruga, there is the earliest evidence of the use of furnaces specifically employed in the production of ceramics or pottery. The Efik, Ibibio and Annang represent a large group of people having single ancestry and were known to have lived in the area several thousand years before Christ.

Nigeria pre-history is believed to have developed an early iron age as evidence from Kainji Dam excavation show that iron works had started in Nigeria by the second century B.C.

The main evidence of West African earliest use of iron comes from Nok in Nigeria. Archaeology has shown how people who lived in the region of the Niger-Benue confluence used iron as early as 500BC. The site of this evidence is known as Nok in the western part of Jos Plateau. It extends as far as Ankiring, Kagara, Taruga and Yelwa. It was characterised by terracotta figurines’ mostly heads of human beings. Other artefacts included round stone axes, iron axe blades, small stone arrow point and bards, and some quantity of pottery. Not far from Nok Culture to the North East of Borno was Diama. It produced simple clay/terracotta animal figures and bronze figures which were dated 500B.C. and crafted by Neolithic or Stone Age population of herdsmen. Significantly, was the development of circular shaped hut which had floors made of potsherds pavement. The fired clay figures included humped cows, sheep and human beings.

The Nok Culture represents a period of cultural transition; that is, from one major culture advancement to another. This is due to the presence of both the Stone Age tools and Iron Age tools within the same cultural complex.

The discovery of Nok Culture clearly shows the development of the Nok Man at par with his counterpart in other parts of the world. His tools were similar to those of the Acheulian man in northern France.

The Ife culture and artefact

Ife is an ancient town regarded as the cradle and spiritual home of the Yorubas. Ife is 320 kilometres South West of Nok. The first Ife works to be discovered were glass beads known as Segi. It was discovered by Richard and John Lander in 1836. But Ife is best known for its life-size brass heads executed in naturalistic style. There were also terracotta heads of humans and animals which appeared natural or semi natural.

These heads had tribal marks called Striations and they distinguished them from other terracotta works. Ife Bronze belongs to what has been referred to as the lost wax system of cire – purdue method. It is believed to be the oldest system in Africa.

Ife artefacts like those of Nok were found at Jebba, Tada and Jitaga all villages located on the Niger. These are called the “Tsoede bronze”. This is indicative of inter-group relation between the Yoruba and the peoples of the Niger.

At Esie, half way between Ife and the River Niger is a collection of stone figures whose location might be significant in the Northward trade from Yoruba land.

Benin is South East of Ife, Benin is notable for her Bronze work, wood carving and extensive sculpture on walls.

Benin bronze are naturalistic in shape and size. They depict the people in their true nature and give special cognisance and regard to the institution of Obaship similar to that of Ife.

Benin bronze work served the same purpose as those of Ife, but those of Benin had other dimensions. They do not only depict the Kings and palace activities, but also indicated Benin’s connections with Europeans. This centre was discovered in 1959 by Frank Willet who worked on the Benin Baptist Church site when digging foundation trenches, and threw up quantity of pottery.

Apart from bronze, Benin culture comprises a massive complex network of earth work of walls which circumvent the inner city and various other cells which indicated early nucleation and centralisation.

Igbo-Ukwu lies about 30km south east of Onitsha. In 1939, a man hired to dig a latrine-pit by Mr. Isaiah Anozie accidentally discovered some objects and ornaments made of bronze. Further excavation on the site by Professor Thurstan Shaw between 1960 and 1964 revealed sacred vessels used for some ceremonial or ritual purposes and of ornaments and regalia for some important person or persons. This was probably a shrine. This site is referred to as Igbo-Ukwu-Isaiah.

The second site, Igbo-Richard, was a burial chamber of some important person. The individual was found in a sitting position atop a copper studded in the corner of a wood line chamber. Its arms were supported on copper brackets and had been dressed in coronation finery with a copper crown, a bead covered head dress, a copper pectoral plate on its chest, fourteen anklet, four wristlets and a pair of bead in-laid copper armlets. In one hand, it held a fly switch whose handle portrayed a horse and its rider.

There were also three elephant tusks and a long handled hand fan with feathers and a copper holder.

The third site, Igbo-Jonah, appeared to be a refuse pit, but produced the most decorated pots ever to be made by a potter; there were also 200 finely worked copper wire links; other objects of either copper or bronze were thirty-five wristlets, two small balls, six cylindrical staff ornaments, a long painted rod, a large jingle ornament and various other miscellaneous pieces and a large quantity of broken pottery as well as a number of complete vessels.

Significance of Early Centres of Civilisation in Nigeria

Firstly, it adequately proved that early man in Nigeria participated in the Stone Age. Archaeological discoveries in Diama and Borno, Iwo Eleru, in Osun and NOK, all point to the fact that early Nigerians fashioned stone tools like other groups elsewhere in the world. Indeed, there are evidences of Achuelian and Sangoan tools in Nigeria.

Widespread evidence of terracotta and brick works also point to an advancement in technology. Ceramic work or terracotta appeared in all cultural centres in Nigeria; and in all cultural centres, there were evidences of advancement and these advancements show a sequence of cultural advancement among the various groups. Besides, its widespread from the North East to the North Central, to South West and South East points to the fact that there must have been contacts between the peoples of Nigeria long before the coming of Europeans.

Copper, as an alloy in the production of bronze among Benin and copper items in Igbo-Ukwu, pointed to the fact that both Benin and Igbo-Ukwu had been engaged in long distance trade along the Niger. This might have been either to northern Nigeria or towards Mediterranean Africa. The cowry shells found in Benin indicated direct contact with Mediterranean Africa-North Africa through the Niger water ways. Pink beads in both IgboUkwu and Benin also stresses this fact.

The method of casting bronze in all centres were similar. They used the lost wax or cire pedure system indicating a cultural diffusion properly carried by interaction, migration and intergroup relations among the people of Nigeria long before the advent of Europeans on the coast of Nigeria.

Paleolithic: This refers to an era marked by crude and early stone implements.

Archaeology: This refers to the study of old age and ancient materials such as the remains of buildings, monuments of an ancient historical period, inscriptions, implements, written manuscripts, other relics etc.

Acheulean: This is an early age industry that is characterised by primitive technology and manufacturing of tools such as stone handaxes. The acheulean hand-axes were multi-purpose tools used to accomplish variety of domestic tasks.